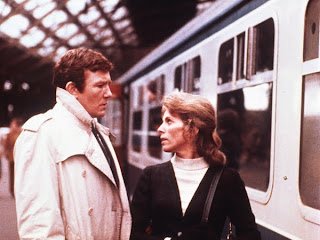 Gumshoe (Stephen Frears, 1971) - or Scouser on the Third Floor, as I shall insist on calling it - is a skilled pastiche of classic film noir, with Albert Finney as a bingo caller and part-time comedian who fancies himself as a private eye. In his first day as a self-styled Sam Spade, he receives a mysterious phone call, plunging him into a superbly-realised world fusing the mundanity of Liverpool life with the Chandler-esque yarn going on inside Finney's head. It's deftly done, with a ready wit and the deep knowledge of crime flicks (and the odd Western) essential to such genre explorations, while the script fairly drips with zingers. The narrative seems to house elements of Chinatown, Charley Varrick, The Cheap Detective, Hammett and Brick, but this was released before a single one of them. Another similar work, Play, It Again Sam, had played on Broadway but would not reach the screen for another two years.

Finney is faultless in the lead, delivering his hard-boiled patter in a sliding hybrid of Bogart and Scouse, and keeping us guessing as to just how far gone his character is. The supporting cast includes Porridge favourite Fulton Mackay, making an ideal heavy as the Scottish hood on Finney's trail, Frank Finlay as our hero's menacing brother and Samuel Beckett alumnus Billie Whitelaw, playing a morally ambiguous woman caught between the siblings and sporting a hairstyle that would be impressively '80s were it not so resolutely '70s. Also cropping up in bit parts are Maureen Lipman as our bookshop floozy and Wendy Richards, speaking nineteen-to-the-dozen in a way that's very hard to decipher. Andrew Lloyd Webber's score - containing a rock 'n' roll parody written with Tim Rice - is also good fun, and if the eventual uncovering of the film's central conspiracy is a touch too small-scale to pack the requisite punch, that's a minor price to pay for 80 minutes of tense, superbly-scripted British noir. (4) 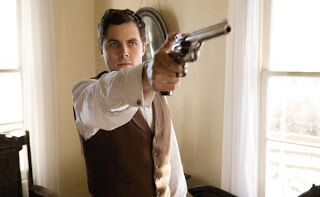 The Assassination of Jesse James by the Coward Robert Ford (Andrew Dominik, 2007) has the stamp of authenticity, but is let down by sloppy pacing and a lack of focus. Casey Affleck is nothing short of brilliant as the 19-year-old Robert Ford, who's drawn into outlaw Jesse James' (Brad Pitt) dwindling band of confidants, only for his awestruck subservience to morph into dreams of revenge, betrayal and greatness. It's a plausible premise: if one was craving approval and was met only with insensitivity, the snub would be intensified by the accompanying feelings of servility. Add to that the lure of fame and the opportunity for Ford to finally seize the mettle and become a man, and you can see why a shifty young kid might grab the revolver his idol gave him and stick a bullet right through his brain.

We start with the build-up to James' final heist, and that night-time train robbery itself is shot with impressionistic flair by cinematographer Roger Deakins. Indeed, there's plenty of great imagery in Dominik's film, as the work oscillates between painstaking realism (via impressively-detailed sets and a busy, factual voiceover) and a sort of heightened otherworldiness. But such sporadic artistry sponsors a narrative that gives the impression of being methodical, whilst leaping all over the place. The filmmaker's debt to Terrence Malick is obvious in the meticulously-composed wide shots, but the movie lacks the hypnotic rhythm of Badlands - and therefore its weighty cumulative impact. Apparently the film was taken out of Dominik's hands and recut into various versions, which might explain the rogue pacing, as well as a shapeless extended epilogue that seems to undermine the film's point of view, as its voiceover artist takes to providing an audio commentary.

That's not to say there isn't a lot to like in this ambitious, arthouse take on the James legend. Affleck and Sam Rockwell - as screen brother Charley - offer definitive portrayals of the Fords, compensating for Pitt's charismatic but empty lead turn, and there are passages of great insight and truth, even as the film takes to hurtling through history at the close. But despite the inevitable tension in its slow, stately presentation of the titular deed itself, the little gem to be found within the film's largely worthless coda - Ford's qualified success on the New York stage - and the fine Nick Cave/Warren Ellis score, it looks more like an interesting failure than a modern classic. It's still a lot better than the Tyrone Power version. (2.5) 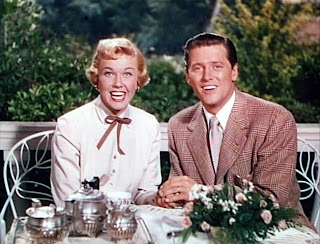 More than enough teeth for two.

Tea for Two (David Butler, 1950) - I like Doris Day, but her cheery singing and cartoonish sensibility can't save this average musical, which is hamstrung by excessive comic relief, an unsuitable setting (the onset of the Great Depression - what an amusing scenario) and characters it's very difficult to root for. The set-up is this: Day dreams of being a Broadway star, and will get her big break if she can win a bet with uncle S. Z. Sakall to say "no" to every question she's asked for 36 hours. Not only do the writers fail to mine this promising premise to convincing dramatic ends, but they hardly wring any laughs out of it either. It's left instead for Billy "Oh no, not Billy De Wolfe" De Wolfe to provide the comic relief, which is not a situation I would like to revisit any time soon.

The lack of thought that went into the script is epitomised by the staggeringly artless way a gaggle of fun late-'20s songs are crowbarred into the narrative. Still, the film is lit by that good score, much of it performed by frequent co-stars Day and Gordon MacRae, and some impressive hoofing from Gene Nelson - with his staircase dance the obvious high spot. Terence Davies' favourite character actress, Eve Arden, snipes agreeably in support. Tea for Two is based on the stage musical No, No, Nanette (filmed in 1930 and 1940), which is the show-within-a-film here. (2)

... and a potboiler featuring your favourite actor* and mine**, Lee Tracy: 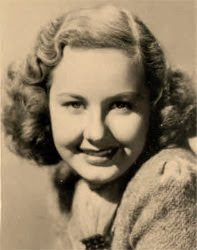 The Spellbinder (Jack Hively, 1939) - For the first five minutes of this Lee Tracy vehicle it looks like we're in for The Nuisance Part II, which would be a thing of unquestionable greatness. Cast familiarly as a shifty lawyer, the great man is running rings around his rivals in the courtroom, with the aid of a bunch of actors posing as his client's desperate family. Then Patric Knowles (memorable as a would-be media mogul in Four's a Crowd) turns up in Tracy's office and the film suddenly shifts into soap opera. Telling us that he's about to snuff out his auditor, Knowles blackmails Tracy into fashioning his defence, then starts sniffing around the shyster's daughter. What a twat.

Tracy could make anything look good and while he’s some way off his irresistible peak here – occasionally looking uncomfortable spouting the kind of piousness his characters usually spent their time puncturing – he’s never less than compelling. Unfortunately the material is at once predictable and contrived, with a climactic shift into melodrama that seems to have been conceived by Jean-Jacques Rousseau's little brother. Agreeably, if not credibly, the uncertain narrative does allow for some lurches back into comedy which, while at odds with the main story, are generally much more entertaining. Tracy's scene with his "guardian" is very funny and Chester Clute offers amusing support as the world's worst prosecution witness.

The film is notable amongst Tracy's films in casting him as a father, just the second of 22 I've seen where he played a dad, and the first giving him a (possibly) grown-up kid. Barbara Read, who was one of the Three Smart Girls in the classic musical-comedy, is of indeterminate age as the daughter. In his desk photo she looks 25; at school she looks about 14, but since she then shacks up with Knowles, I'm guessing she's not. The actress herself was a fresh-faced, faintly cross-eyed 22. If you're a Tracy fan worried about his lesser performance here, rest assured: he was probably just cross to be back at work after his European honeymoon. The star returned to his whizz-bang comic showboating soon afterwards in the super crime comedy The Payoff. (2)