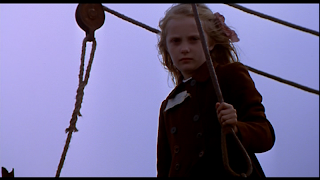 The Secret of Roan Inish (John Sayles, 1994) - On the soundtrack to Tarantino's Kill Bill, Vol. 1, rapper RZA dedicates his witless contribution to character O-Ren Ishii, "half-Chinese, half-Japanese-ie". Well this review is dedicated in its entirety to the isle of Roan Inish, all Irish, no Japan-inish.

John Sayles has spent most of his stellar career as a writer-director documenting the making of modern America: with the searing, masterfully-woven race relations dramas Lone Star and Sunshine State and the classic coming-of-age film Baby It's You, which doubles as a portrait of the immigrant experience.

This change-of-pace outing finds him amidst the myths and mysteries of rural Ireland, where a 10-year-old girl is hunting for the baby brother who was swept to sea when her family evacuated its remote island home. The film builds slowly, mesmerisingly towards a cathartic act of mercy, incorporating several nuanced diversions which either bolster the narrative or flesh out its highly evocative portrait of a sea-faring community.

Meanwhile, Sayles' unmatched ear for dialogue is as attuned as ever, his empathy for the characters reinforced by inventive direction that sees the world from Courtney's height for its first five minutes. Roan Inish is a tender, affecting and ultimately magical film - and one of the best few I'll see this year. RZA was unavailable for comment. (4)
Posted by Rick Burin at 18:43