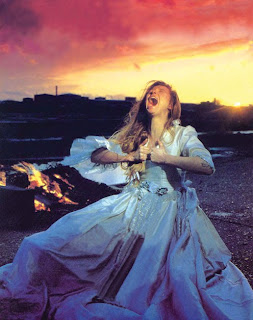 The Last of England (Derek Jarman, 1988) - "On a green hill, mourners stand and weep for the last of England," intones Nigel Terry at the start of this arresting mission statement from arthouse enfant terrible Jarman. The film is a barrage of striking imagery, mixing old Super 8 footage of a child playing in the back garden with shots of a teenage punk shooting up in a garage, and the middle-aged Jarman, apparently chronicling vanishing species of plant in some kind of futuristic warehouse. Then there's clips from news reports, audio of Hitler, some staged stuff about paramilitaries and - of course - a naked yuppie having sex with a soldier on a massive Union Jack. An air of paralysing despair permeates this one-of-a-kind movie, which takes on state-sponsored violence, the Thatcher government, misguided building projects, the trashing of the environment and American cultural imperialism - all in the opening half hour. Not all of it hits the target, and some of it may only make sense to Jarman, but for every piece of self-mythologising pretentiousness there's a pithily employed phrase (courtesy of T.S. Eliot or Allen Ginsberg) or thought-provoking juxtaposition. Like the sounds of a Nazi rally segueing into a vicious sideswipe at military discipline, then military pageantry. Or widow Tilda Swinton ripping her wedding dress to shreds - even as she wears it - on a nuclear beach. The Last of England plays like the forlorn, obscene bastard child of Humphrey Jennings' hymn to the nation - Listen to Britain. I liked it. Great soundtrack too, put together by Simon Fisher-Turner, and containing Elgar, Marianne Faithfull and a spot-on pastiche of '30s musical numbers called Broadway Boy. (2.5) 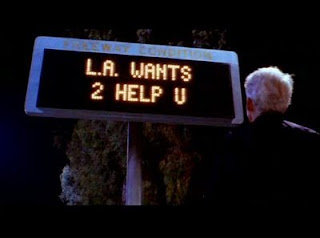 L.A. Story (Mick Jackson, 1991) is like a Woody Allen film relocated to the West Coast: a series of comic observations about contemporary L.A. life, with a romantic pentagon attached. The plot, which is barely there at all, has self-styled "wacky weatherman" Steve Martin falling out with adulterous girlfriend Marilu Henner and falling in with bubbly annoyance Sarah Jessica Parker, while he pines for English journo Victoria Tennant - who's being woodenly wooed by ex-husband Richard E. Grant. It's probably worth mentioning that Martin is aided in his quest by a chatty road sign. The film is disjointed and uneven in tone, with two delightful - even magical - scenes set to Enya's Exiles that are completely at odds with the rest of the movie, but the jokes are mostly sublime. There's the mugger who accosts Martin by declaring: "Hi, my name is Bob, I'll be your robber", Parker's justification for becoming a spokesmodel ("I always liked pointing") and the solution to the film's central riddle: "That's the mystery of the ages?" says Martin, incredulously; "I had 2 think up something fast," the signpost flashes back. A bit more emphasis on plot and character, along with some pruning of its more insular asides, and this could have been something very special. For all its flaws, it's still top escapism. (3) 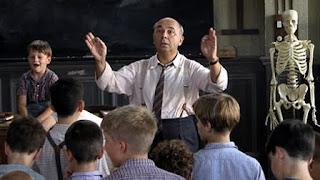 The Chorus (Christophe Barratier, 2004) is an utterly beguiling French comedy-drama about a failed composer who takes over as supervisor at a boarding school populated by war orphans and channels his young charges' frustration and unhappiness into music. As a simple, uplifting movie it's sometimes predictable, but it's never naive, with a disarmingly offbeat sense of humour that contrasts neatly with its lovely, sentimental vignettes. The shower of farewell notes and the scenes featuring young Pepinot are particularly moving, while the film is underscored by some suitably affecting music. The casting is also spot-on, with Gerard Jugnot ideal as the teacher, and the kids uniformly fine. My favourite joke: "He wrote 'Mr'?" "Err... no." A straightforward, heartfelt and winning film. (4)
Posted by Rick Burin at 21:59