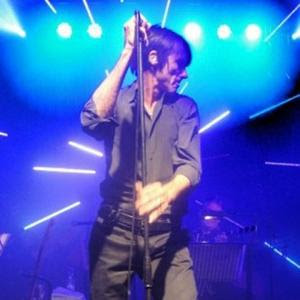 I saw Suede just once during their reign as the high-cheekboned articulators of alienated urban angst and drug-addled, idiosyncratic Britishness - playing the Manchester Apollo on the Coming Up tour back in 1996. So when they announced this one-off (?) reunion show at the Royal Albert Hall, I leapt.

It's seven years since they broke up, 16 since their greatest record, 18 since they blitzed the British music scene with the camp, intensely sexualised glam rock of The Drowners. What to expect in 2010?

Following a brief set by the noisy, boring These New Puritans (like a geeky Joy Division with two drummers and no tunes) and some touching contributions from various Teenage Cancer Trust speakers - the gig being held as part of the charity's annual series of concerts - Suede strolled on to a burst of choral music.

From the start they seemed supercharged: four talented, laid-back musicians* fronted by an outrageously expressive, bum-wiggling extrovert - singer and lyricist Brett Anderson. First they tore through a trio of tracks from their spotty, populist third record - She, Trash and Filmstar - then a pair of stomps from earlier LPs. Animal Nitrate, one of the best pop songs of its decade, was as blisteringly indulgent as on record, Heroine given an overhaul that switched it from needy yearning to white-hot morbidity.

Pantomime Horse was a moment of blissful tranquility before I was back to getting sweated on by strangers, as the first five rows heaved to The Drowners - a blast of joyous sleaziness. Throughout the gig, Anderson responded to cherished choruses by leaning or leaping into the audience - a ball of emoting, mincing, oddly hip energy. He clasped hands with fans, then declined to take exception when others took to stroking his hair. He said at the concert's close it had "been fun" - a pretenseless statement that struck me as utterly charming.

That sense of fun played into an escapist version of So Young that rolled back the years in an instant, whilst doing nothing to dim the pained, eroticised splendour of The Asphalt World, here given the epic treatment.

Three straight songs from fourth album Head Music climaxed with a spellbinding version of the literal-minded, effectively straightforward He's Gone, dedicated by Anderson to his friend Jessie who passed away three weeks ago, and ending with him on his knees, before segueing - touchingly - into The Next Life.

The band found space for two B-sides. Killing of a Flash Boy, which sounded - now as in 1994 - like the theme song to a British exploitation movie, was admirably riotous and impassioned, but it was the other rarity that left the greater impression. The Living Dead, a superb number included on the stand-alone single Stay Together, was performed by Anderson on acoustic guitar, accompanied by keyboardist Neil Codling. Though the singer seemed to be wincing at some of his vocalising as he fiddled around with the rhythm, it was a real highlight.

That was the last song of a 19-song main set. After a brief, unconvincing exit, they returned for a stellar encore, beginning with an exultant take on The 2 of Us, before escalating/degenerating into a massive singalong to Coming Up single Saturday Night (not the Whigfield one). Anderson spent most of it standing on a speaker at the edge of the stage, feyly, euphorically, conducting proceedings.

And then they were gone. I hadn't really been sure what to expect, but the result snapped the intervening 14 years into nothing, it was so exciting, invigorating and entrancing. Happily, Suede are a band with a firm grasp of what their best work is - and the enthusiasm and gift for performance to put it across on stage. While we didn't get The Power, or Breakdown, the set leant heavily on their earlier work, containing just three tracks from their last two albums (Can't Get Enough, Everything Will Flow and He's Gone, all from Head Music), compared to six from debut record Suede, five from Dog Man Star and five from Coming Up. I don't really care for the three songs that opened the show, but they work well in a live setting.

The whole two-hour show had a heightened, celebratory feel I haven't encountered too many times (the Manics at the Manchester Nynex back in May 1997, Tom Waits at the Edinburgh Playhouse in July 2008, Dylan in Sheffield last April) - relief and happiness for young fans who thought they'd never see them, a chance for others to say thanks again for that record they put on repeat for 10 years. It's also the only gig I've seen where the band got a standing ovation halfway through.

And I missed Thursday deadline. Score.

*Those musicians are: guitarist Richard Oakes, once a swaggering pretty boy, now looking just like Any Old Bloke though his dazzling guitar skills remain intact; the currently bearded bass player Mat Osman with his Easter Island head; Neil Codling, a keyboard player and backing singer who appears to be younger than when he joined the band in 1995 and gazes into the middle distance with an emotionless expression no matter what he's playing; drummer Simon Gilbert, who has quite pointy sideburns.

She
Trash
Filmstar
Animal Nitrate
Heroine
Pantomime Horse
The Drowners
Killing Of A Flashboy
Can't Get Enough
Everything Will Flow
He's Gone
The Next Life
The Asphalt World
So Young
Metal Mickey
The Wild Ones
New Generation
Beautiful Ones
The Living Dead
The 2 Of Us
Saturday Night
Posted by Rick Burin at 12:21