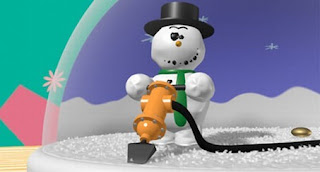 SHORT: Knick Knack (John Lasseter, 1989/2003) is an early Pixar short that was dusted down, cleaned off and given two boob reductions (yes really), before it was considered fit to open for the studio's Finding Nemo. It's a funny, imaginative little film about a snowman trapped in a snow globe who dreams of relaxing with the tasty honeys (their breasts now markedly smaller than in 1989) over on the other shelf. He tries drilling his way out, then using a blow-torch, then TNT, each with hilariously unsuccessful results. Then he starts thinking outside the globe... The computer animation looks a little primitive compared to the delights Pixar have since provided, but that's the price of progress. Subsequent advancements aside, it's another cracking short from the closest thing we have to a modern-day dream factory. (3.5) 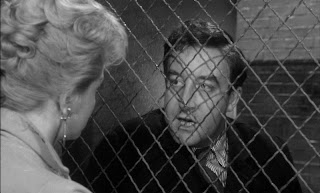 Two Way Stretch (Robert Day, 1960) was a dry run for The Wrong Arm of the Law, which also featured Peter Sellers and Bernard Cribbins as crooks tangling with law enforcer Lionel Jeffries. But while that later film is tightly plotted, offbeat and consistently hilarious, this one is mostly tame, laboured and lethargic. Sellers, Cribbins and heavy-set pal David Lodge are inmates roped into a scheme by phoney vicar Soapy Stevens (Wilfrid Hyde White) to commit a £2m diamond theft, then return to their cells, thus fashioning the perfect alibi. Jeffries is the blowhard who replaces their pushover prison officer, throwing the scheme into jeopardy. There are only a couple of good jokes in the first hour - a gag about Kipling and a puerile marrow/penis routine that becomes funny about fourth time around - but once the robbery arrives the film finally kicks into (low) gear, sparking an ironic ending and a coda that recalls the classic Road films. It's an uninspired but pleasant movie that paved the way for a minor classic. (2) 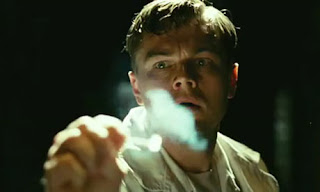 CINEMA: Shutter Island (Martin Scorsese, 2010) - The fourth collaboration between Martin Scorsese and Leonardo DiCaprio is first-rate for an hour, until it takes a disastrous left-turn and its credibility topples into the sea. DiCaprio plays a federal marshal called to a mental hospital on the remote, storm-ravaged Shutter Island to investigate the disappearance of a female murderer. There he’s driven half-mad by an apparent web of conspiracy - perhaps led by doctor Ben Kingsley - and vivid hallucinations about the wife he recently lost (Michelle Williams). For an hour this is a stylised, gripping thriller with an oppressive atmosphere and some bravura moments. There’s an absolute knock-out of a dream sequence, with DiCaprio and his wife in the apartment where she died, ash raining down upon them. When he moves to hug her, she crumbles to dust. Another disquieting set-piece in a crypt recalls the classic ‘40s Val Lewton chiller Isle of the Dead, employing the elements and one very loud bang to maximum effect. But then the film falls apart, with a growing emphasis on Holocaust imagery that’s crass and offensive, and a hideously ill-judged twist that negates everything that’s gone before. Whereas The Pawnbroker was respectful and effective, showing glimpses of concentration camp horrors colouring the life of its protagonist, Scorsese relatively wallows in the iconography of genocide. It’s a real pity that what begins as a masterclass in terror and suspense ends up as such gratuitous, derivative trash. An apt title would be Shlock Corridor, as Scorsese takes Sam Fuller’s state-of-the-nation 1963 film, Shock Corridor, set in an asylum populated by A-Bomb scientists and haunted civil rights poster boys, removes the elements of social commentary and offers endless, needless portrayals of unspeakable crimes. Is there honestly anyone who enjoys seeing that stuff? The director’s treatment is heightened and expressive, lit by nods to Frankenstein and Bedlam and aided by a bombastic score from former Band guitarist Robbie Robertson, but the fascinating first hour appears to have been made by accident, en route to a far less interesting conclusion. (2) 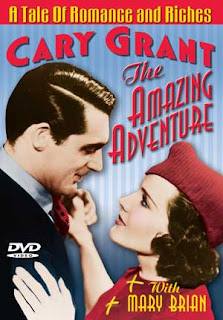 The Amazing Adventure (Alfred Zeisler, 1936) is an earnest but muddled independent film featuring Cary Grant just as his star was about to go stratospheric. He plays a wealthy, despondent layabout challenged by his doctor to go for a year without relying on his riches. There are effective vignettes, notably those featuring selfless working class folk, but the film is ultimately a bit unsure of itself, suggesting that "money isn't everything" while its newly philanthropic protagonist spreads joy through his generous use of the paper stuff. The movie also lacks universality, with an absence of real insight into the society it is depicting and a heavyhanded, cliched romantic subplot. As a chance to see Grant working on his home turf it's interesting, but as a British variation on contemporary Capra fare, it falls well short. (2) 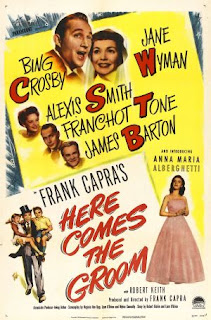 Here Comes the Groom (Frank Capra, 1951) - By '51, Frank Capra's heyday had passed. No other director has ever possessed the certain magic the Italian-American sentimentalist had from the early-'30s to the mid-40's, but such things don't last forever. Not even for John Ford. Once the alchemic magic dried up, Capra sometimes tried to recapture former glories - he'd already started remaking past hits - and sometimes served up such engaging, undemanding trifles as this one. Bing Crosby, who'd starred in the director's Broadway Bill update, Riding High, the previous year, is Pete Garvey, a newspaperman (hurray!) who returns to fiancee Jane Wyman after three years in France, with two war orphans in tow (a then-timely theme which served as the basis for a slew of films, including Sun Valley Serenade). He can keep them for good if he's married within five days, but darn it if Wyman isn't getting hitched to multimillionaire Franchot Tone - who's got laser-vision when it comes to seeing through Crosby's schemes to win her back. It's enjoyable stuff, with a couple of pretty good songs (including In the Cool, Cool, Cool of the Evening), a scene-stealing part from Alexis Smith as Tone's dowdy cousin, given an eye-grabbing overhaul by Bing's dodgy Pygmalion, and a great gimmick in which a tiny Princess Leia-esque hologram of Wyman appears atop a gramophone as Bing listens to a record of her voice. The scene ends as you'd want it to, with her whizzing round and round the turntable. Another interesting aspect of the film is its barely-disguised crudeness - this was the same year of A Streetcar Named Desire after all - with a couple of sex gags that wouldn't have passed the censors 10 years before. A couple of unbilled star cameos add to the film's likeability and its "everything, including the kitchen sink" feel. The film's resolution is too rushed, and Wyman is bland in her lead role, but this is a welcome reminder that even when Capra no longer made great films, he could still fashion lively, attractive entertainment. (3) 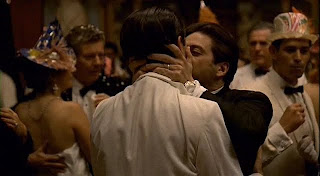 The Godfather Part II (Francis Ford Coppola, 1974) is a brilliant film full of unforgettable moments, if marginally less coherent and effective than the original. Set seven years after the events of the first movie, it traces the increasingly alienated don, Michael Corleone (Al Pacino), as he expands his criminal empire into Nevada and Havana, while fighting congressional hearings, assassination attempts, and betrayal from within his very family. His cold existence is contrasted with his father Vito's early years, as the future godfather (Robert De Niro leaving an indelible impression) escapes persecution in Sicily and finds a new life in America - where his neighbourhood is dominated by a grasping, merciless small-time Mafioso. The first half of the movie is slightly disjointed, but lays the groundwork for a final hour that is utterly unimpeachable - much like Michael Corleone himself. The visceral violence and quotable dialogue ("You keep your friends close, but your enemies closer") are obvious surface pleasures, but once more the film's greatness lies in its more reflective, verbose moments. There's a superb scene between Michael and Fredo (John Cazale) that recalls the apex of the first film (Brando and Pacino's garden two-hander), with Cazale apparently trapped in his chair by rage and regret at being passed over by his father. "It was the way Pop wanted it," Michael says. "It ain't the way I wanted it," Cazale shrieks. "I can handle things; I'm smart. Not like everybody says like dumb; I'm smart, and I want respect!" The sequence in which Michael's wife (Diane Keaton) reveals the truth about her 'miscarriage' is also extraordinary to behold. Pacino doesn't just slap Kay across the face, he launches himself at her from across the room - like a coiled spring, or a cat; though really like nothing else on earth. Usually such concessions to melodramatic domestic drama are tawdry, upsetting and unbelievable, but Pacino's remarkable handling of the material makes it chilling, horrifying and impossible to forget. This is a superbly-scripted, brilliantly-acted study of absolute moral corruption, but just as Michael is colder and more ruthless than his father, so The Godfather Part II is more clinical and less emotionally resonant than the first film, provoking a sense of melancholia in place of tears. That's unquestionably fitting, and it feels like nitpicking to point out shortcomings in a film so intelligent, incisive and compelling, but I am going to reverse a long-held view and contend that the sterility and occasionally haphazard plotting of this sequel makes it inferior to the first movie, if only by a fraction. It's still a masterpiece. (4) 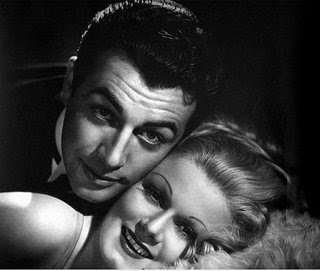 Personal Property (W.S. Van Dyke II, 1937) - When the Hays Code was introduced, Hollywood found it couldn't re-release hit films from 1934 and earlier as it wanted to, as they were laced with newly inappropriate content, from cheery adultery to big themes that were now off-limits, like rape and homosexuality. The solution? To re-shoot them, with most of the rude stuff chopped out. Personal Property is a charming, occasionally genuinely peculiar romantic comedy based on the 1931 film The Man in Possession with two of the same cast members - Reginald Owen and Forrester Harvey. Owen plays a stuffy, impoverished factory manager who plans to marry widow Jean Harlow - unaware that she's saddled with massive debts. His brother (Robert Taylor) doesn't care about the money. In fact, the ex-con is so smitten that he installs himself in her house as a bailiff, playing butler as he waits for her to pay her bills. If Taylor's comic persona isn't distinct from other stars, playing like a melange of Robert Montgomery, Gary Cooper and a young Jimmy Stewart, he's immensely likeable and creates sparks with Harlow. She had come to the screen as a wooden performer, but left it as an actress of some flair. Sadly, Personal Property was to be her final completed film. It's a stagey but very entertaining slice of escapism that features a possible first for movies: a character so posh that all of his dialogue is entirely (intentionally) unintelligible. Nice. (3)
Posted by Rick Burin at 23:04