Yes, we reach a quarter-century of review updates, with a pair of delicately contrasting British flicks. 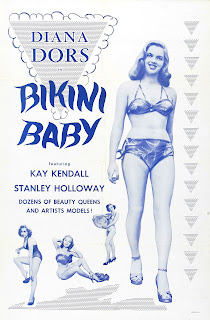 This is in no way a misleading poster.

Lady Godiva Rides Again (Frank Launder, 1951) is a disappointing comedy from the Launder-Gilliat team responsible for penning The Lady Vanishes and Millions Like Us. Pauline Stroud is naivety itself as a competition winner who crashes the big time and finds the showbiz world is a tad unpleasant. Her Ruby Keeler-esque performance fuses big-eyed posturing with nauseating delivery to no visible end, as her character leaves behind good guy George Cole to rub shoulders with film star Simon Abott (Dennis Price at his most foppish) on the slippery slope to Sid James' dodgy "French revue". But at least pineapple salesman John McCallum hasn't deserted her. Launder and Gilliat aren't sure whether they're dishing up a comic romp or a cautionary tale and the result is a largely laughless, frequently miserable, ultimately patronising film. On the plus side, there is one atypically fantastic scene around the hour mark featuring Alastair Sim as a broken-down producer, formerly "the Mr Murington", now "that Mr Murington". Marrying pathos and belly laughs, it's one of the most perfectly rounded sequences I've seen and presumably provided the template for Peter Sellers' pathetic, hilarious scene-stealing bit as The Wrong Box's Dr Pratt. It's also fun to see Richard Wattis, Sim's Happiest Days of Your Life co-star, putting in a couple of minutes as the sardonic Otto Mann, while the pneumatic Diana Dors has a showy bit-part as a bikini-clad model. Elsewhere, the casting is bizarre, both wilfully so and in retrospect. As well as featuring Googie Withers in its film-within-a-film and boasting a walk-on from Trevor Howard, it offers a first glimpse at Joan Collins, gives future DJ Jimmy Young a chance to croon and presents Ruth Ellis - later notorious as the last woman to be hanged in Britain - as a beauty contestant. Such pub trivia aside, Lady Godiva is a bit of a damp squib, cantering completely off the road in the final reels as the makers strive for some sort of grand neorealist statement, and find only Sid James. (2)

Trivia note: Dors played a character based on Ruth Ellis in Yield to the Night, though Ellis wouldn't get a real biopic until Dance With a Stranger in 1985, starring Miranda Richardson - who appears in Wah-Wah (see below). 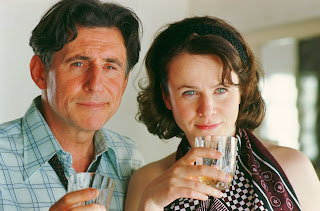 Wah-Wah (Richard E. Grant, 2005) is a delightful film about writer-director Grant's childhood during the final throes of colonial Swaziland. Balancing fraughtness - as his alter-ego's mother (Miranda Richardon) leaves and his father (Gabriel Byrne) descends into alcoholism - with superbly judged comic passages, it transports the viewer into the head of the young protagonist, perfectly articulating his feelings without the need for speechifying or voiceover. Such a feat is testament to the economy and precision of the script, Grant's subtle but expressive direction and Nicholas Hoult's excellent performance as the 14-year-old Ralph Compton. That Hoult can hold his own against Emily Watson, the most gifted dramatic performer of her generation, is as high praise as I can think of. Watson is ideal, as ever, playing the boy's ballsy American step-mum, who's threatening to turn high society on its ear if she can stand the scotch-swilling company long enough. The film does suffer from a dearth of geographic context in the mid-section and has some structural problems in the second half that seem to saddle it with several false endings, but it's clever, subtle and formidably unsentimental, with superb acting across the board. Its more painful exchanges have the unmistakeable ring of truth and grim memory, and there's a great set of scenes in which Hoult sees A Clockwork Orange and starts idly apeing McDowell's eyeliner-wearing sociopath. I really liked it. (3.5)
Posted by Rick Burin at 20:17