Our Friends in the North - TV review

I watched the whole series over four nights this week. Here's a write-up: 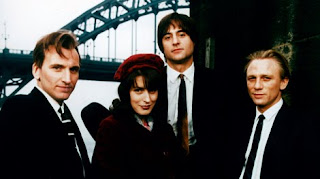 Our Friends in the North (Simon Cellan-Jones, 1996)

*MAJOR SPOILERS ALL THE WAY THROUGH*

Peter Flannery's journey through three decades of working class history is a passionate, astute and astonishingly sure-footed drama, tracing the contrasting fates of four Geordies in a vividly-realised world of police corruption, ill-conceived town planning and vice. The four stars roughly represent archetypes of the period - a Labour chameleon, a Thatcherite self-made man, a radical and an apathy factory - but they're much more interesting and well-rounded than that.

Nicky (Christopher Eccleston) is our radical. In 1964 he wants to change the world. By 1979 he's part of the militant tendency, having gun-run for the anarchists. Eight years later, he's all burnt out: a self-centred, unhappy academic jettisoning happiness for a cheap thrill and trying to connect with a father lost to Alzheimer's. Mary (Gina McKee) is the childhood sweetheart he let down back in '64, leaving her to the clutches of wannabe musician Tosker (Mark Strong). She grows up to be a Labour stalwart, while Tosker morphs into a wealthy developer thanks to Thatcher's tax breaks. The apolitical Geordie (Daniel Craig, in startling form) is a likeable likely lad who becomes immersed in a Performance-like world of strip clubs and Soho hoods (including Malcolm McDowell) and pays with his sanity.

Each of the nine episodes covers a specific year (from 1964 to 1995), containing apparently major events that crumble to dust and supposedly minor ones that grow in significance as they echo through the decades. The series is extraordinary in that it never goes where you expect it to and yet always rings completely true.

Mixing fact and fiction in a sur-Ellroy manner, the narrative encompasses the John Poulson public housing scandal rooted in the 1960s, successive investigations into police corruption and - in a bravura, largely self-contained episode - the miners' strike of 1984. There may be concessions to conventionality in the shape of three or four one-dimensional right-wing "baddies", but Flannery's glorious, deep writing creates an overwhelming number of compelling, multi-faceted characters, several of whom are among the greatest in television history.

Austin Donohue (a vivid characterisation from Alun Armstrong) is an arrogant, bribe-taking, bribe-paying councillor in bed with a property developer. And yet "Mr Newcastle" - based on the disgraced T. Dan Smith - is utterly human, with frailties that can't be papered over by an unmatched gift of the gab, and justifying arguments that are as practical as they are unpleasant. He gets a glorious send-off too, with a final line that's one of the high points of the series. "Oh no, not on the street, man, not on the street," he says, as the cops arrive to arrest him.

Nicky's father Felix (Peter Vaughan, Porridge's Grouty and one of Straw Dogs' more reprehensible villains), meanwhile, is haunted by the failure of the Jarrow March and incapable of showing love or respect for his son, whom he describes as "useless", as Alzheimer's later takes hold. Geordie is the story's Sebastian Flyte: attractive, sympathetic and laid low by drink, with his friends powerless to help.

Interestingly, Tosker follows a similar path to redemption as Soames, Eric Porter's enduringly controversial character in the 1966 Forsyte Saga. Admittedly the musician-cum-mogul doesn't rape his wife, but there is an extremely uncomfortable scene in which he accuses Mary of "ripping him off", and then has his way with her as she looks on boredly. By 1995 he is as successful in his homelife as in the business world, becoming a fully-fledged family man and possessing enough empathy to give his old pal Geordie not only a job, but also a place to stay.

This novelistic work, based on Flannery's 1982 play, is incredibly engrossing - try thinking about anything else between episodes and you'll see what I mean - and extremely moving. Donohue's exit is a killer, but there are numerous other wallops, like Nicky's photographing of a bearded vagrant in 1984, his hug with Geordie in the final episode, as Colin Towns employs his wonderful theme music within the action for the first time, and the pair's unforgettable talk about the love of Geordie's life. "When I was with her, everything made sense," he says. While the series is bleak and emotionally draining, it's also blackly funny, with an oft-hilarious 1979 episode that suggests the whole of Britain was engaged in some sick joke designed to destroy itself across 11 joyless years. Elsewhere, Flannery jazzes up the history lesson with thriller elements - check out the scene where Geordie returns to London after laying low: a masterclass in nausea-inducing dread.

Our Friends in the North is meticulously constructed, with elements that slot perfectly into place and a heavy sense of fatalism. But it's never forced or artificial, and boasts memorable, brilliantly-drawn characters elevated by some sensational acting. Craig, as the unconquerable Geordie, is the stand-out, retaining the character's essential spark, guilessness and penchant for silly jokes even when he's beaten down by life. The scene in which the booze-addled arsonist tells the cops he and a few other lads "set fire to a guy once" is superbly judged. "When was this, Geordie?" asks the officer. "Bonfire Night," he replies, exposing filthy teeth as he breaks into a delighted guffaw.

The series is, simply, magnificent - astonishingly ambitious, intelligent and impassioned, with inspired use of symbolism as it charts the fluctuating fortunes of Newcastle's working class since 1964 and, really, since the Jarrow Crusade of '36. Without ever labouring the point, it draws a parallel between Felix's dementia and the collective amnesia of the proletariat about its proud shared heritage. It's no coincidence that his character's condition is brought on by a crass, belittling thug and his Alsation - the alienated, unthinking '80s man lashing out in the only way he knows how, and savaging the spectre of working class resistance in the process. In his police interview, Geordie says the Labour Party told him to set fire to a mattress - "and that's why I don't vote for them, because they tell you to do daft things", suggesting that for vast swathes of the working class, the party's stance has proved to be unsuitable, wrong-headed and ultimately unintelligible.