The comedian's Hitler Moustache show is extraordinarily good. Here's why... 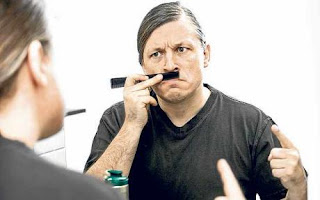 Richard Herring is worrying about how history will remember him.

The comic, in Harrogate for the latest leg of his Hitler Moustache tour, has recounted the fear that if he went to his parents' golden wedding anniversary with the square of facial hair he'd grown specially for the show, that might well spoil the celebrations.

"My family would be looking at it, saying: 'Your great-great uncle Richard? My best guess is that he was a Nazi paedophile.'"

Once more Herring is making himself the butt of his gags and while his edgy humour might not be to everyone's taste, the 300 people who've snapped up tickets for his Harrogate Theatre show are laughing fit to burst.

The main focus of his set is racism and judging people by appearances, centred on his attempt to reclaim the toothbrush moustache for comedy, but loaded with broadsides at the BNP and liberal culpability in their recent successes.

He acknowledges that the moustache "is a big commitment, to make what is essentially quite a glib point".

Still, he hopes the look will take him from playing small beer halls to headlining stadiums, as it did for the last guy.

The material dealing with racism is staggeringly good, with an extended bit on 'why racists are less racist than you' that's positively inspired.

"The most extreme racists only see two kinds of people: black and white," he says.

"You see about 170. They're so much closer to thinking that everyone is the same."

In his 90-minute set, he'll ruminate on religion, his commitment to his art and the theft of his iPhone, though his freewheeling style allows for numerous absurdist asides and some concessions to pure childishness.

He tells the audience that Hitler is looking down at him from heaven, launching a routine about Michael Jackson's supposed entry to the kingdom of God that passes into gleefully silly territory.

"I heard about the die-hard fans gathering outside the hospital after Jackson's death," he said.

"I thought: 'What are the Die Hard fans doing there?'

"That's completely inappropriate. When Bruce Willis dies, that will be the time for them."

Emerging after the interval, Herring says mock-apologetically: "There aren't really any jokes in the second half of the show, I just have a go at you", but it's just a sign that the blistering, deeply funny deconstruction of racism and racist language is about to resume.

A sequence analysing a BNP election leaflet satirises the claim that the main parties are proposing mass immigration, before Herring returns to aiming digs at his audience's inconsistency.

Jokes about Nick Griffin's appearance are not OK, he says, but it's alright to do a generic German impression.

"Is that racist? No, Germans are not a race. They wanted to be, but hey are not."

That throwaway remark epitomises Herring and his show - dark, challenging, informed and with a sense that this swaggeringly assured comic knows exactly where he's heading.

The theme of Hitler Moustache, emerging quietly and seamlessly from the gimmicky set-up, is that all we must do to see off fascism is to vote.

Herring is just about the best comedian we have right now, his incisive material elevated by apparently effortless delivery.