A bit about me - because it's probably time (Part One) 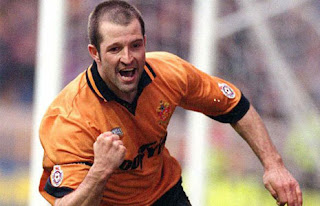 Steve Bull - a formative figure in my li(f)e

Hello there - and thanks for wandering in from the vast, grubby landscape that is the world wide web, with its empty crisp packets blowing every which way and its proliferation of naked women. This, he said with barely merited pride, is my blog. Back in the day - that's a phrase I nicked from the sporadically lively 1995 heist flick Things to Do in Denver When You're Dead - I used to do a weekly film column at the newspaper I work for, the Harrogate Advertiser. Since I did it in my free time for no additional moolah, it got to be a bit of a bind, so after 12 exhausting months I jacked it in and transferred my extra-curriculur efforts to this here piece of work. I've posted a full 24 updates in the first nine weeks of this year - reviews of around 50 films, plus some archive pieces and a pair of star interviews. And there's more on the way. Now I've decided to waste a good five minutes of your life by telling you about mine.

I was born at the age of four round the back of a caravan in the West Midlands. Abandoned by my parents Robert Lindsay and Millicent Fawcett (the mother of modern feminism; forget Emmeline Pankhurst) who couldn't stand the scandal, I was raised instead by Wolves. Not vulpine philanthropists, but the Wolverhampton Wanderers backroom staff. Shanghaied into their strike-force opposite in-form goalscorer Steve Bull, I was continually frustrated by their inability to break an apparently self-enforced glass ceiling and win promotion to the Premier League. So I left. Touring the country with a marching band, I accidentally won a scholarship to a leading independent school, ultimately leaving with eight GCSEs and a car-full of ground maintenance equipment.

That was good enough to get me onto the newsdesk at the Harrogate Advertiser, where I've managed to acquire a lifetime of (presumably false) memories in just two-and-a-half years. I like films, football and pasta and my favourite colour is still red.
Posted by Rick Burin at 16:44