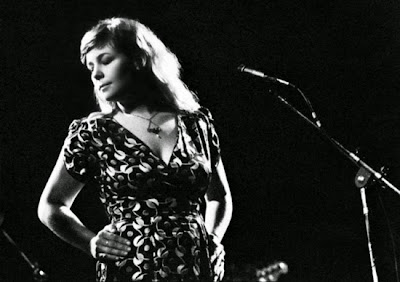 The greatest singer I’ve ever heard is back in the arts pages due to a new biography by Mick Houghton. Though billed as the definitive work on the life of Sandy Denny – it’s the first to be authorised by her estate – it isn't really. It’s sweet and more even-handed than Clinton Heylin’s mean-spirited, typo-ridden book, No More Sad Refrains, and insightful about the folk-rock world that Denny inhabited during the 1960s and ‘70s, but it's noticably weaker on Sandy herself and has problems with properly articulating her tragic demise at 31: while Heylin’s ghoulish account was gruelling to read, this one almost skips over it.

What it may yet do, though, is catapult Sandy back into the public consciousness, a feat not even achieved when a song that she wrote but never recorded ended up soundtracking the BBC's 2012 Olympics coverage. Or, for that matter, when she guested on a record that sold 37 million units.

For the uninitiated, Alexandra Elene MacLean "Sandy" Denny was a pioneering vocalist who battered down the divisions between British folk music and electric rock, firstly by joining Fairport Convention and turning them from a homegrown Jefferson Airplane into the most dynamic traditional band in the world, then with her short-lived Fotheringay ensemble – who threw some age-old American and Australian influences into the mix – and finally with four solo records (and a brief return to Fairport) that scaled unfathomable heights and then plumbed a few depths, as hard living took its toll on her mind, her sense of artistic assurance and her voice, previously an instrument of unique clarity, emotion and power.

Before that fall from health, relevance and grace, though, Sandy was simply untouchable, particularly in the period from 1968 to ’71, when she was completely in control of her mesmeric gift, having built its power, harnessed its mesmeric tone almost free of vibrato, and learned to sing from the depths of a sadly tortured soul.

I still remember the first time I heard her. I must have been about 10, and I thought I'd never heard anything more beautiful. I still think that.

Here, then, are 14 Sandy vocals to enrich your existence (13 of them are on this Spotify playlist): 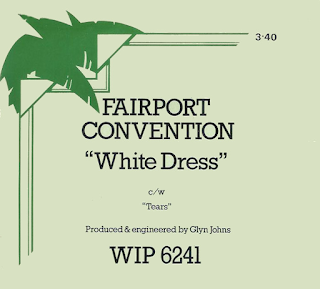 Buy this record, look how much effort we've gone to with the sleeve.

14. White Dress – Fairport Convention (1974) – By the time Sandy rejoined Fairport in 1974 - by all accounts largely because her womanising husband was now in the band, and she wanted to keep an eye on him, though she also enjoyed the camaraderie - her flawless voice had begun to betray her. This one's a gem, though, as she plaintively pleads with her lover to kiss her and take her dancing. His reward? She might, might, put on a white dress. She's not promising anything. Like Billie Holiday before her, Sandy could at least compensate for her ailing vocal powers with breathtaking emotion and matchless technique. And unlike Billie Holiday, she didn't sound like a frog dying of laryngitis, even when the fags and booze began to bite.
(YouTube / Available on: The Rising of the Moon by Fairport Convention, 1974)

13. Lord Bateman (1971) – The Great Lost Sandy Song is now The Great Found Sandy Song, discovered on the end of an unlabelled reel nearly 40 years after its recording. It's one of the few completely unaccompanied recordings in her canon, with a hypnotic quality similar to the title track of Dylan's Tempest or Anne Briggs' traditional Young Tambling (recorded by Sandy's Fairport as Tam Lin in 1969). Stir yourself from the trance long enough, and you might notice just how long she could go without breathing, and how powerful and on-pitch she stays while doing it.
(YouTube / Available on: The Notes and the Words: A Collection of Demos and Rarities, 2012)

12. It Suits Me Well (1972) – For her second record, Sandy tried writing in a more straightforward style, and the result was many of her best songs. The penultimate track is not about a fabulist, as I'd hoped, but written from the PoV of three different itchy-footed wanderers - a gypsy, a sailor and a circus-hand - for whom "the living it is hard, oh but it suits me well". She apparently dreamed of that existence, with its obvious freedoms, but lacked the temperament (and the mental balance) to ever approach it. Her laidback delivery makes it a delight, and it's ultimately one of her most upbeat numbers, despite the usual tug of melancholia.
(YouTube / Available on: Sandy, 1972) 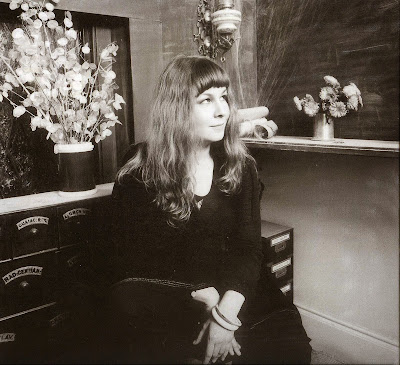 11. John the Gun (1971) – One of three anti-war songs that Sandy wrote, and the best of the lot, as she takes on the persona of all-time arsehole John the Gun, an amoral if poetic braggart who declares that "ideals of peace are gold which fools have found upon the plains of war", perhaps the finest single line of her songwriting career. There are numerous live versions and alternate studio takes doing the rounds, but none are better than the one which ended up on Sandy's debut solo album, The North Star Grassman and the Ravens. The first three songs from that record are unassailably great.
(YouTube / Available on: The North Star Grassman and the Ravens, 1971)

10. Who Knows Where the Time Goes – Fairport Convention (1969) – Sandy's signature song ("It was one of my first songs, and I just wish people would listen to some of the other ones," she complained in 1973) has taken on an almost unbearable poignancy following her early death. She had demoed it in 1965, recorded it during a brief stint in The Strawbs in 1967, and watched as Judy Collins' version hit the American charts the next year, but the definitive recording is on Fairport's Unhalfbricking. People keep covering it, but I've no idea why, for how could they possibly improve upon it.
(YouTube / Available on: Unhalfbricking by Fairport Convention, 1968)

9. A Sailor's Life (first version, 1969) – Fairport Convention – Sandy used to sing this song in the dressing room as a warm-up. On 26 February 1969, backstage at Southampton's Adam and Eve Club, the rest of Fairport joined in, and that night they played it for the first time. The recorded version on that year's Unhalfbricking is celebrated for its guitar and violin 'duel' - the kind of thing that folk-rock aficionados find irresistible and everyone else finds unbearable - which takes over after just a couple of verses of Sandy. In the early '90s, this alternate version finally came to light. Free of Dave Swarbrick's exuberant bow-work, it is instead a vocal wonder, with our heroine permitted to belt or breathe out every last lamenting word. Then there's an awful lot of guitar. Such is the all-consuming nature of the redone version that no-one interviewed for Mick Houghton's new book could even remember recording this one.
(YouTube / Available on: The Notes and the Words: A Collection of Demos and Rarities, 2012)

8. The Quiet Land of Erin (BBC session, 1968) – A rare excursion into Irish Gaelic, at least in the choruses, Sandy's version of this beautiful Celtic staple is nothing revolutionary, but bypasses my critical faculties entirely, hitting me in the heart. Having joined Fairport a month earlier, she would soon drag them into the folk realm, and they'd turn her acoustic world electric.
(YouTube / Available on: Sandy Denny: Live at the BBC, 2007) 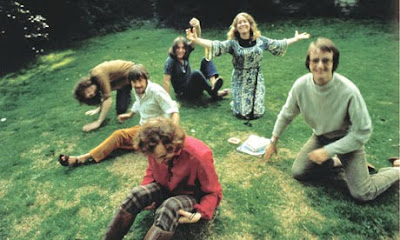 5. The Music Weaver (no strings, 1972) – The closer to Sandy's best solo record, 1972's Sandy, is perhaps autobiographical, perhaps about Richard Thompson, but either way a stunning artistic statement couched in her usual elliptical, pastoral language. This version is shorn of the trite, slushy strings that mar many of her greatest later songs, and accompanied only by her piano and Swarb's haunting violin.
(YouTube / Available on: Sandy Denny, 2010) 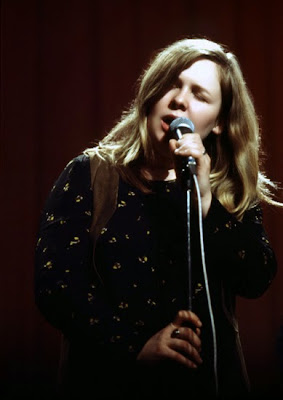 4. Farewell, Farewell – Fairport Convention (1969) – The highpoint of the immortal Liege & Lief is this Richard Thompson ballad, set to the tune of the traditional song Willie O’ Winsbury, and dealing abstrusely with a van crash the previous year that took the lives of both his girlfriend and Fairport’s drummer, Martin Lamble. Clocking in at just over two-and-a-half minutes, and operating at a consistent intensity of backwards-looking chilliness, it doesn’t demand every ounce of Denny’s staggering, multi-faceted talent, but what she does with the song is just about perfect.
(YouTube / Available on: Liege & Lief by Fairport Convention, 1969)

3. Percy’s Song – Fairport Convention (BBC session, 1969) – In the hands of Sandy-era Fairport, Bob Dylan’s unreleased, anecdotal polemic about a careless driver getting banged up for 99 years becomes an unremitting wail of anguish, Denny’s mega-lunged performance driving it onwards with a repeated cry of “Turn, turn again”, to which she adds grace notes, massive notes and bluesy flourishes, the result a song that’s chilling in content and euphoric in execution.
(YouTube / Available on: Fairport Convention: Live at the BBC, 2007)

2. Bruton Town (Live at the Paris Theatre, 1972) – Here's what regular collaborator Dave Swarbrick had to say about Sandy's singing: 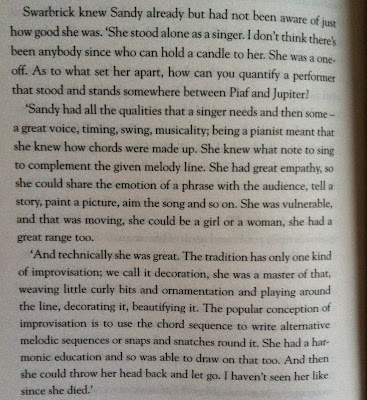 Listen to Bruton Town and try to disagree.
(YouTube / Available on: Sandy Denny: Live at the BBC, 2007) 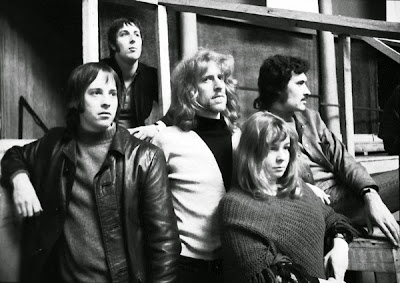 1. The Banks of the Nile – Fotheringay (1970) – Not just Sandy’s greatest, but a performance largely unmatched in the annals of British popular song, a vocal of crystalline purity that grows in majesty, magnificence and heart-rending desperation as it progresses. This epic traditional ballad is a tale of colonial wars, love and the possibility that it might be OK to disguise yourself as a man, join the army and go to Egypt, in order to be with your boyfriend. The conclusion: it would not be OK, or as Sandy acknowledges: “But your waist it is too slender, and your fingers they are too small/In the sultry suns of Egypt your rosy cheeks would spoil”. It’s Martin Carthy’s favourite Sandy performance, and Linda Thompson’s too, her voice at its unapproachable best, and every line a breathtaking, unwavering wonder packing a devastating emotional punch.
(YouTube / Available on: Fotheringay – Fotheringay, 1970)

Thanks for reading, now go and make her a national treasure. Then I can complain and say that I liked her first.

And let me know your own. You started here.
Posted by Rick Burin at 17:16