Three American sports films and a movie about the British pastime of empire-building: 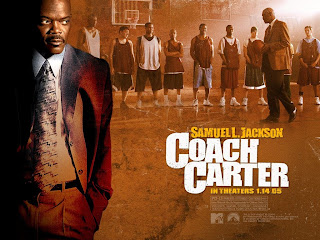 For a good hour, Coach Carter (Thomas Carter, 2005) appears to be following a well-worn path, as high school basketball coach Samuel L. Jackson whips a discipline-free collection of inner-city individuals into a slick, unbeaten unit. Then it emerges that the players have reneged on a deal to attend class and secure C+ grades, and the authoritarian taskmaster locks them out of the gym, suspending all practices and matches until they up their game off the court. It's heartening to see a film so confident of its message: that the US treats young African-Americans abominably, almost willing them to fail, that sports stars are put on a pedestal in a way that damages society and that academic excellence is undervalued in comparison. (Intriguingly, the '40s baseball comedy It Happens Every Spring also addresses the two latter observations, in rather lighter fashion.)

The script is flawed - there's the odd poor line, an uninteresting subplot about a student who may be about to become a father that repeatedly brings the film to a juddering halt, and a tendency to reel off stats to cement its thesis - and there's something a little calculating about the way the music swells every time Jackson starts grandstanding. Which happens rather a lot. But this is still an extremely persuasive blend of inspirational true-life story, sports picture and social polemic. Jackson is extremely good in the central role, better than I've ever seen him, the plotting is extremely involving, the game sequences are very well choreographed (though the structural problem familiar from Rocky of each side dominating in turn persists) and the whole thing is surprisingly moving - even when its methods of manipulation are pretty transparent.

Every basketball film suffers from not being Hoop Dreams (well, except one), a human drama of singular power in which every frame is real, but this is an unexpectedly impressive and heartfelt film in which the laudable strengths - intriguing subject matter, a powerful central turn and a sense of conviction scarce in contemporary cinema - overpower its more grounded, trivial shortcomings. (3) 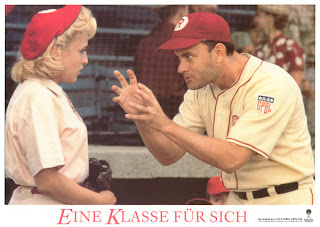 A League of Their Own (Penny Marshall, 1992) is a cracking piece of escapism that pays tribute to the female baseball players of the WWII period, who filled stadiums when the male superstars went off to fight. The central squabble between sisters Geena Davis and Tori Petty is of questionable value, the character development is sometimes lacking (or else duplicitous in the case of Megan Cavanagh) and Davis is transparently the worst baseball player of all time, but for all that it's just a tremendously entertaining film: fast-moving, stuffed with ace montages, faux-newsreels and enjoyable sequences, and boasting several excellent performances. Petty is fine in her role as the overlooked younger sibling and there are eye-catching supporting bits from David Strathairn - who played crooked pitcher Eddie Cicotte in John Sayles' Eight Men Out - as the league's publicity man and Jon Lovitz as a sleazy, tactless talent scout. But the best performance unquestionably comes from Tom Hanks. I was a Hanks agnostic, but this has won me round. He delivers a superb, tragi-comic turn as an ex-baseball pro turned "fall-down drunk" who finds a new lease of life doing, well, what still appears to be just about the bare minimum of coaching. Whether bickering with his benefactor, scratching his balls in the dugout or advising a young autograph hunter to "avoid the clap", Hanks treads the gossamer-thin line between perfection and caricature, while keeping the pathos in check. It's a shame, then, that Marshall somewhat botches the job with a pointless, painfully mawkish framing device set in the present day, which is completely at odds with the rest of the film. Seeing as several scenes and subplots had to be excised due to time constraints, this obtrusive monument to saccharin seems particularly misguided. The rest of it, though: lovely. (3) 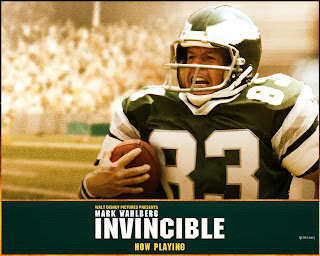 *SOME SPOILERS*
Invincible (Ericson Core, 2006) - Philadelphia, 1975. Unemployment is soaring, the factory workers are on strike and NFL side The Eagles are in meltdown. Enter Vince Papale (Mark Wahlberg), an out-of-work substitute teacher, part-time barman and American Football fanatic, who pitches up at an open trial held by new coach Dick Vermeil (Greg Kinnear) and proceeds to run 40m in 4.5 seconds. He can't really make the team, can he? Well if he can't, we won't have much of a story. This is a textbook Disney drama, in the best sense of the phrase (and there are many other senses of the phrase): simple, sentimental and sanitised (I doubt very much that Papale's best pal shouted: "You're a freakin' Eagle!" upon him making the cut, and you will never see a sympathetic Disney character endorse a union), but hugely uplifting and extremely well-crafted.

Wahlberg, who no-one but the most fervent Funky Bunchers would have tipped to make it as a serious, important actor, is thoroughly excellent, as he always is these days, and Kinnear is perfect as the twinkly-eyed coach who's got a special feeling about his down-to-earth discovery. The film also excels in the on-field sequences, putting the viewer in the centre of the action to such a degree that I genuinely got a few pre-match butterflies. These critical encounters are effectively contrasted with a handful of late-night headlight-lit character-building amateur games.

Love interest Elizabeth Banks is completely unconvincing - she's too modern by at least 31 years - and the comic interludes seem ill-judged, but the central story is fantastic and it's superbly told, right down to the real-life footage at the close. (3.5)

There's an interesting comparison (well, I think it's interesting) between these three films in terms of how they see their sports stars. In Coach Carter, Jackson laments that society allows them to be unaccountable and arrogant. In Invincible, they can be a symbol of hope and inspiration, a famous touchdown by Steve Van Buren getting Papale's father - a fan - through 20 years of hard work and hardship. A League of Their Own argues that sport is important - if it's what you hold most dear - but that raising a family is equally heroic. I think Invincible will speak particularly strongly to anyone who was obsessed with sport as a child. The realisation that I wouldn't become a professional footballer was probably an important formative disappointment or something, but I'm not sure I've ever really got over it. 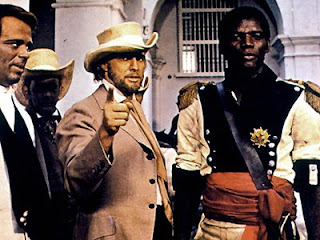 Burn! (Gillo Pontecorvo, 1969) is a hopeless, fascinating jumble, as English naval officer Marlon Brando instigates a slaves' revolt in a Portuguese colony, then returns 10 years later to quash the same rebel army. That superlative subject matter becomes an almost wilfully scatty melange. You get a wooden exchange, half of it dubbed, in the style of these international '60s epics, in some pokey set. Then a spellbinding image: perhaps a rebel twisting in the smoke of a forest fire. Then lots of footage of people walking... incessantly, intolerably walking... hundreds of them, just walking, for minutes at a time. Then a devastating solliloquy from Brando - doing his best George Sanders voice - on the subject of morality, civilisation or personal honour. Then more people walking, more dubbing, more walking. Burn! also features one of the most peculiar scores Ennio Morricone has ever submitted. If you can imagine the sound of an elephant sitting on Morricone as he tries to play a synthesiser, it's pretty much like that. Including the yelling. There's at least half an hour of footage missing from this English-language cut; whether the extra bits would make it seem less or more disjointed and long-winded remains to be seen. But it is worth catching for those passages of brilliance: its sporadically impressive imagery, the clear, then-timely overtones of Vietnam (Walker even goes to Indo-China between the film's two halves) and Brando's often amazing characterisation. There's just a lot of tedium amidst such timelessness. (2.5)

DVD note: The DVD I got from LoveFilm, produced by Cornerstone Media, was absolutely atrocious: fuzzy and drained of colour, panned-and-scanned, and with poor sound. The triple threat.
Posted by Rick Burin at 19:49