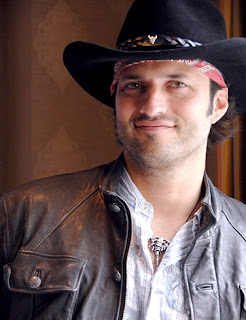 In 1992, Mexican director Robert Rodriguez burst onto the scene with a low-budget, Spanish-language thriller about a musician hiding out in a small town having been mistaken for a deadly criminal. El Mariachi was followed three years later by Desperado, a glossy Hollywood actioner where the title role was taken up by Antonio Banderas. A conclusion to the trilogy arrived in 2003, on which Rodriguez spanked $29m - more than 4,000 times what the first film cost - as he looked to emulate part three of Sergio Leone's slightly overrated Dollars Trilogy, The Good, the Bad and the Ugly. What I've done is, I've watched the films and then written reviews of them. 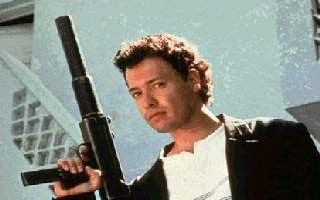 *SOME SPOILERS*
El Mariachi (Robert Rodriguez, 1992) - Rodriguez's debut feature, shot in two weeks for $7,000, is a heady mix of grisliness, wry humour and charm, as a travelling guitarist (Carlos Gallardo) is mistaken for a ruthless killer, turning him from lightning-fingered balladeer to lightning-fingered desperado. It's an excitingly rough and ready mission statement, with bloody action scenes, a touching romance and a great use of voiceover, as our hero harks back to the mariachis of old, lending the film a timelessness and cultural relevance. Rodriguez allows some cheesiness to creep in when slimy '80s-style villain Peter Marquardt is on screen, but it's a minor shortcoming in this excellent little film, which milks the mistaken-identity plot for all its worth, aided by Gallardo's considerable charisma and likeability. There's even time in its 82 minutes for us all to stop and listen to a nice song. (3.5) 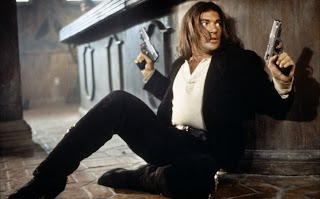 The first sequel, Desperado (Robert Rodriguez, 1995), kicks off in spectacular fashion, with Steve Buscemi regaling barman Cheech Marin and his pals with the story of a near-mythic gunman, "the biggest Mexican I have ever seen". His tall tale is intercut with exaggerated footage of El Mariachi (now played by Antonio Banderas) wiping out a bar-full of real lowlifes. "I think he's headed this way," Buscemi adds helpfully. For 50 minutes, the film maintains that momentum, setting up its Leone-ish story through a series of deft set-pieces as Banderas blasts up a second saloon, gets acquainted with leggy book-store owner Salma Hayek and encounters a knife-throwing mystery man (Danny Trejo). But then the story gets away from Rodriguez, becoming repetitive and uninteresting as it sets up a run of increasingly desperate action sequences. Banderas is good in the lead, but the film's concessions to conventional "cool" are pretty tiresome compared to the individuality, wisdom and bracing bleakness of the first instalment. (2.5) 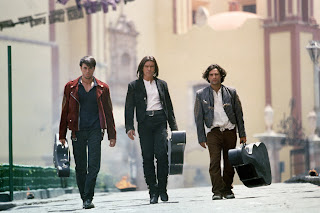 Once Upon a Time in Mexico (Robert Rodriguez, 2003) - So this is how the trilogy ends. Not with a bang, but with a succession of massive bangs. The first sign that Rodriguez might be getting a little carried away is in the credits sequence, where Banderas strolls to the top of a cathedral and we pull away to an obscenely, self-consciously grandiose helicopter shot that must have cost more than his entire debut film, the music swelling in mock-Morricone style. Then our hero watches a blameless pensioner get shot for protecting his identity and you begin to think: 'Perhaps a little more time could have been spent on the story.' It's a confused, portentous film that weaves its many narrative strands with the casual grace of a dead rhino, as CIA agent Johnny Depp tries to engineer a revolution to his ends, Banderas hunts the man who killed his wife and daughter, and Eva Mendes wears a succession of very tight-fitting tops. There are individual sequences that work well, particularly another flashy opening that's rich in mythology and a flashback that sees Banderas and Hayek escape from a fifth-storey flat whilst handcuffed to one another, but the overall effect is deadening. Rodriguez certainly knows how to mess up the end of a trilogy, doesn't he? (2)
Posted by Rick Burin at 07:41