Steve Martin arguing with himself, and Borat - Reviews #21 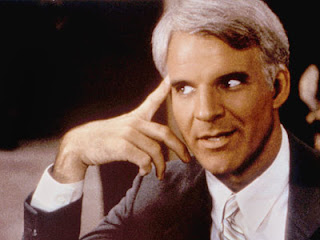 All of Me (Carl Reiner, 1984) - "He's in conference with Miss Cutwater, also with her doctor, her nurse, Mr Mifflin, an English girl with no bra and a Hindu holding a bedpan on a stick. I don't think you should go in there." And with that little speech from receptionist Selma Diamond, All of Me finally gets going. The plot, somewhat reminiscent of I Married a Witch, sees friendless, dying millionairess Lily Tomlin enlisting a Swami with a poor grasp of English to transfer her soul to a sparky young blonde (Victoria Tennant). As you might imagine, the plan gets botched, and Tomlin's griping newly-dead becomes housed in the body of unhappy lawyer Steve Martin - whose soul is in there as well.

The first 20 minutes are pretty dry, but once Diamond starts drolly lecturing, Dana Elcar begins two-facedly badmouthing his wealthiest client and Martin takes to bickering with 'himself', it settles into a fun - if unexceptional - groove. There's one absolute gem of a sequence in a courtroom, which is set-up with panache and expert timing and builds to a dizzyingly absurd climax. The rest of the film skirts by on the talents of Martin - very good and indulging his fondness for outlandish physical comedy - and Tomlin, with her Kate Hepburn-ish delivery. I rather like Tennant as a romantic lead, too, and her line: "I love it when you talk like a beer commercial." (2.5) 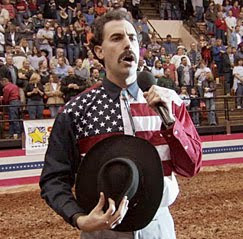 And then we have Borat (Larry Charles, 2006), one of the most popular - and most widely-loathed - movies of the last decade. Sacha Baron Cohen plays the Kazakhstani TV reporter of the title, who travels to "the US and A" in a bid to understood his American cousins and finds that while they'll put up with rank bigotry, they're not so keen on you bringing a bag of poo down to dinner. Though Cohen is acting, the bulk of his encounters are with real-life folk, from drunken, misogynistic fratboys to strait-laced politicos. The movie doesn't have a coherent viewpoint, deliriously lampooning anti-semitism whilst ripping the piss out of poor eastern Europeans, but it does shed some light on the prejudices apparently ingrained in several strata of US society, and offers a dozen big laughs. Most come from stunts and interviews, rather than the straight-to-camera material, which is often smug and obvious.

Happily, Cohen's quick wits and use of a well-judged pause can turn even the most unpromising chat into a goldmine: witness Borat's effortless misunderstanding of "...not" as a comic suffix. Intriguingly, some scenes are cut off almost as soon as they begin, suggesting that a few of the subjects may have been onto him. That heavy editing contributes to the general bittiness. The film's highlight is Cohen's performance at a rodeo, in which he turns the entire crowd against him in four appallingly cringe-worthy minutes. The sequence ends with him singing the 'Kazakh national anthem' to the tune of the The Star-Spangled Banner: "Kazakhstan greatest country in the world/All other countries are run by little girls/Kazakhstan number one exporter of potassium/Other countries have inferior potassium." Personal taste dictates that I found such silliness more engaging than all the crap about "retards", however post-modern the comic might claim it is. I also felt uncomfortable at his needling of perfectly reasonable folk, like an unfailingly polite driving instructor and some friendly feminists.

While Borat is neither a great film nor an important one, and is saddled with myriad shortcomings, it is often deeply funny. The sight of Cohen sprinting along a crowded New York street as he attempts to kiss a very unhappy all-American man on both cheeks, his crashing of a mortgage brokers' dinner stark-naked and his whipping up of the rodeo crowd ("May George Bush a-drink the blood of every single man, woman, and child of Iraq") are considerable compensations for moral inconsistency, some duff jokes and a mock-introspective narrative (featuring Pamela Anderson) that really sags in the second half. (2.5)
Posted by Rick Burin at 23:58