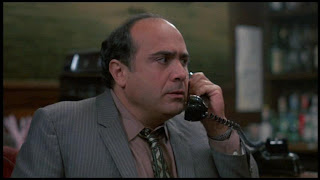 Tin Men (Barry Levinson, 1987) is a nifty examination of the American Dream, focusing on a pair of aluminum-siding salesmen in early-'60s Baltimore who engage in an escalating campaign of retribution after their Cadillacs collide. Richard Dreyfuss is a sharp-shooting huckster in a powder blue suit, Danny DeVito a down-on-his-luck nighthawk trying to stay in the game. Just as they rely on sheen and trickery to flog their wares, so the film inveigles its way in with a succession of comic episodes, before revealing itself as an incisive take on the artifice of materialism and machismo - and a compelling character piece. It flirts with the hustlers' romanticised image of themselves, but also shows the reality: they're just a bunch of fraudsters, flogging the American Dream.

Tin Men is a subtle, masterfully-crafted little film, boosted by strong performances from the leads (rough edges and fluffed lines intact), nice supporting turns - including Barbara Hershey as DeVito's put-upon wife - and writer-director Barry Levinson's terrific ear for dialogue. His script is realistic but finely-honed and, years before Tarantino provided his own post-modern take on eaterie conversation (and some five years after Levinson's own Diner), offers several servings of pop-culture-savvy squabbling that complement the movie's more ambitious elements.

There's one excellent exchange in which DeVito tells his friends he'd never seen Dreyfuss before the crash, only to find that pal Stanley Brock won't let it lie. "You musta seen him. He hangs out with Carly Benelli, Cheese... you know, that group," he says. "Don't you remember, he was up at the Corral one night when we there... he's a good dancer. You must have seen him." Eventually DeVito tires of being told what slick moves his adversary has, retorting: "What do you want me to do, date him? What do I give a shit if he's a good dancer?" "I tell you, if I was a girl I would be very impressed," Brock replies. "You're not a girl and you're impressed," counters friend Jackie Gayle.

Another of the film's strengths lies in its original plotting: it's almost impossible to second-guess where the story is heading, particularly in the first half. While the next hour does offer some concessions to conventionality, they're entirely in keeping with the characters' shifting mind-sets, and there's generally another trick or two up Levinson's apparently bottomless sleeve. The subplot about the Maryland Home Improvement Commission clamping down on bad practice is perfect. That's not to say the film doesn't have flaws - there are occasional lulls, and a bit more context wouldn't go amiss - but that it's welcome to find a movie so assured in its value, intelligence and razor-sharp sense of humour that the director lets you discover its qualities for yourself. A movie so well-handled that even the way busted scammers hand in their licenses is a snapshot of their characters. Levinson also makes a neat job of paraphrasing the era, with simple but effective production design, smart credits and a first-rate song score by '60s-soundalikes Fine Young Cannibals.

What starts off as a lively story of obsession and revenge - a funny spin on The Duellists, if you will - ultimately ends up as something more intriguing, durable and worthwhile. And the draft drawings of my revamped house look just about good enough for Life Magazine. I'm covering the place in siding. (3.5)
Posted by Rick Burin at 21:14