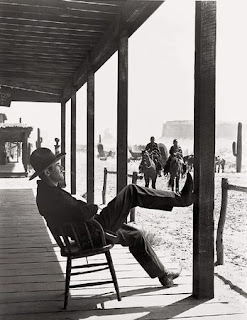 My Darling Clementine, John Ford's take on Wyatt Earp, Doc Holliday and the rest, has long been one of my favourite movies. Perhaps the director's most optimistic, romanticised vision of the Old West, its every frame is tinged with a palpable nostalgia. And despite the film's cruel jolts and emotional interludes, it's dominated by gentleness and humour, and celebrated for its charming vignettes, like Henry Fonda's Wyatt Earp on the porch, and on the dance floor.

Ford largely confines the traditional narrative to the first 10 and last 10 minutes, making it one of his purest portraits of a changing society and one of his most personal films. I really can't think of another director who could have made it. To prove the point, take a look at the 1939 movie on which it's based, Frontier Marshal, helmed by fellow former silent film director Allan Dwan. Ford is streets ahead of his contemporary in terms of his talent, ambition and artistic sensibility, but he's also making an entirely different film, focusing on different aspects of the story and creating something deeper, more intriguing and, ultimately, ageless.

But that's not the whole story.

Now, thanks to Fox's Cinema Reserve label (they're not sponsoring this, I'm just grateful to them), who released the movie on DVD in 2006, I've been able to see an earlier cut of the film: a work-in-progress, as hotshot producer Darryl F. Zanuck and director Ford battled over their conflicting visions for the piece. Though the pair had massive mutual respect, regarding one another as the greatest director and greatest producer in the history of cinema, their egos and contrasting priorities made for fireworks. And their tussle over My Darling Clementine ended in acrimony and bitterness. Ford was fond of what he called "grace notes": seeing the narrative as something to be diverted from as he evoked a time and place and fleshed out the characterisation. Zanuck, naturally, placed an emphasis on commerciality and believed a high tempo was necessary to maintain viewer interest and keep the coin rolling in. The producer jokingly said to Elia Kazan that when Ford ran out of ideas, someone started singing, and the director cut to an extreme long shot full of slanting shadows.

Ford had numerous weapons in his arsenal to defy interference, the most potent of which was shooting only what he needed (known as "cutting in camera"). But in the case of My Darling Clementine, he overplayed his hand and lost the battle for supremacy, with Zanuck opting to chop an entire half-hour out of the film, commissioning a new (perhaps overly dramatic) score from Alfred Newman and conventionalising the hero. The pre-release version that exists was screened to test audiences when the bulk of the edits had been made, but shows us a little of what was lost. It's a more unusual, artistic film, with several key differences. Here's a quick summary:

1) Doc Holliday's character is less ambiguous. Here we see Chihuahua (Linda Darnell) hanging around with Billy Clanton when she's spurned by Doc. That would lead you to assume that he gave her the cross stolen from Wyatt's brother James, when he was gunned down, despite her protestations that she received it from Holliday. In the final edit, that foreshadowing is absent, meaning we see Holliday as a potential villain during Earp's pursuit of him. As this scene shows Billy buzzing around Holliday's girl, the later meeting between the two isn't such a jolt.

2) More interplay between Earp and Holliday. The pair enjoy a quick chat before the anticipated mystery play. Doc says he got a big scar on his face shaving, nicely playing into the sense of mystery surrounding his character in the opening stages, as well as the running gag about the barber's shop.

4) Further exploration of the Doc-Clem relationship. A brief exchange during the operation on Chihuahua ("Mrs Carter", "Yes, doctor") hammers home the impossibility of a renewed relationship. There's also more dialogue between the couple in the scene on the saloon balcony, with Holliday saying his old self is dead, but this was shot by Lloyd Bacon under Zanuck's instructions, then trimmed by the producer before release.

5) A very Fordian presentation of the changes in Tombstone. The extended church dance sequence begins with some fine scene-setting, as the townsfolk come out of the distance and proceed past the camera. It's like something from the director's lyrical 1950 film Wagon Master. You can see why Zanuck would cut it, but it adds great context to the set-piece and to the film.

7) Chihuahua gets a better send-off, and Earp a more interesting end. In the pre-release cut, Earp acknowledges Chihuahua's sacrifice with a glance at her open window, before meeting Clementine on the outskirts of town. His shy, solemn handshake seems more in keeping with his character. In the final film, he gives her a peck on the cheek. The retake in the finished film was shot months after the movie first wrapped and doesn't match the original footage.

The pre-release version offers a fascinating insight into the creative process behind one of the great Westerns. But more than that, it's just a fantastic film, adding a little something to a movie I thought was pretty much perfect. (4)
Posted by Rick Burin at 14:11