An introduction to... Lee Tracy (with a review of Criminal Lawyer)

This post contains one instance of strong language, employed in a comical sense. If that's likely to offend, please take a look at the Myrna Loy piece instead. No swearing there.

As you may have guessed from the blog name (borrowed from a 1933 Tracy vehicle), this razor-witted, motormouth leading man is my favourite actor. Here's a quick intro to the man.

An introduction to... Lee Tracy 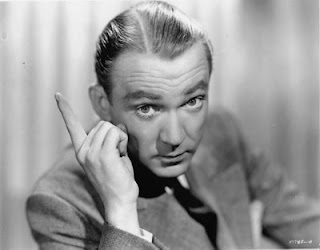 After originating the role of Hildy Johnson in the original Broadway production of The Front Page, sparky, red-headed Lee Tracy went to Hollywood. He made a splash at Warner Bros, playing reporters, shysters and sharpsters in a run of gloriously snappy flicks like Blessed Event, The Half-Naked Truth and Washington Merry-Go-Round, something of a dry run for Capra's Mr Smith. Tracy signed for MGM in 1933 (William Powell made the same switch a year later), a move that did nothing to curb his ebullience or anti-authoritarianism, on screen or off. Just how highly the studio regarded him is evidenced by the number of movies they threw him into. In '33 alone he made no fewer than six movies at MGM, including forgotten classics Turn Back the Clock and The Nuisance, established greats Bombshell and Dinner at Eight and a peculiar Russia-set screwball comedy called Clear All Wires!, opposite Benita Hume and Una Merkel. Then he blew it.

There are potentially many fine ways to put the skids on a meteoric rise, but Tracy's takes some beating.

He pissed on the Mexican Army.

The story goes that Tracy was in Mexico shooting Viva Villa! for the studio when - blind drunk - he resolved to relieve himself off a balcony. The presence of a passing military parade below led to a diplomatic incident that saw him arrested, kicked off the film and then fired by MGM, after the Mexican papers called his actions "an insult to the nation". There is some debate over the authenticity of that story, though, superb as it is. Cameraman Charles G. Clarke says in his autobiography that Tracy was merely making obscene gestures to a guy outside his window. It's also worth questioning why Tracy had to go (from the studio, not to the toilet), since studios routinely hushed up sex scandals and hit-and-runs involving their stars. Perhaps the story was already too public, or perhaps his near-constant hellraising had left him on a last warning, but some have speculated that his type of wisecrack-driven film may have been losing favour with audiences (he only had a supporting role in Viva Villa!), with the scandal providing a suitable pretext on which to sack him. Whatever, they must have been mad. Tracy was something very special.

Charismatic and dynamic, the actor had one-of-a-kind delivery and a catalogue of recognisable mannerisms, like utilising his long, thin index finger to emphasise a point. Though there is such thing as a recognisable Tracy character - an incorrigible scalliwag playing everyone around him as he gets the scoop/wins the case, before displaying some skewed sense of morality in the final reel - he was no one-trick pony. Tracy's reporters in The Strange Love of Molly Louvain and I'll Tell the World (1934) are completely different, as are his promoters in Two-Fisted and Dinner at Eight. He also excelled in more obviously diverse roles: as a broken-hearted clown slipping into self-loathing in You Belong to Me, a Truman-esque President in his last film The Best Man and a disenchanted middle-aged man getting the chance to relive his life, and change history, in the devastatingly brilliant Depression-era fantasy Turn Back the Clock.

Following his sacking in '34, Tracy struck a three-picture deal with Columbia, before making a heap of low-budget star vehicles over at RKO, and a few for Poverty Row studios like PRC. Though the RKO movies vary in quality, they do acknowledge Tracy's standing as a uniquely gifted, fast-talking leading man near the peak of his powers, and are largely tailored to his talents.

One such RKO film is Criminal Lawyer (Christy Cabanne, 1937), which I watched last night. It's in many ways a standard Tracy film and, as such, an absolute riot. Taking the basic set-up of The Nuisance - Tracy is a shyster whose success in the courtroom is based more on theatrics and tricks than conventional legal practice - the writers also toss in the gangster subplots familiar from Blessed Event and Advice to the Lovelorn. The result is very similar to the William Powell movie Lawyer Man, though bizarrely that 1932 film chose not to show any of the courtroom sequences to which it frequently referred. The plot here has Tracy's barrister-come-showman becoming DA and trying to shake off his nefarious former sponsor. Hilariously, the tagline of the film gives away its entire storyline. What does the poster think it is - Halliwell's? Without telling you exactly what happens, I'll just say that as Tracy spars with hateful hood Eduardo Ciannelli, a woman (Margot Grahame) enters the picture, becoming Tracy's cook, secretary and confidante. That makes his sometime girlfriend (Betty Lawford) very jealous, setting up a slightly melodramatic final third that isn't as strong as the rest of the picture. Erik Rhodes provides plenty of comic support playing his patented amorous Italian (as seen in The Gay Divorcee, Top Hat and The Smartest Girl in the World), but as usual it's Tracy's show. Just seeing him on screen makes me happy, since he's never tired, or lacklustre, or sub-par. He's always just magnificently, spectacularly Tracy-ish. When the script is sharp, he's impossibly good, but he also elevates so-so sequences. His interrogation of a woman accused of murder recalls his pyrotechnics in Blessed Event, talking Allen Jenkins through a trip to the electric chair, and he imbues the climactic scene with an improbable credibility as well as a compulsive watchability. My 21st Tracy film is flawed, certainly, but yet another must for fans of the actor. (3)
Posted by Rick Burin at 22:03