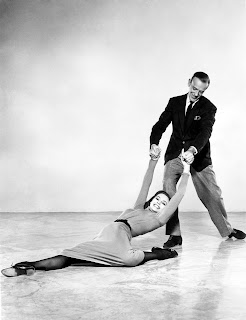 Well you try to find a decent colour still from this Technicolor movie...

Silk Stockings (Rouben Mamoulian, 1957) is a neat musical update of Ninotchka, perhaps the best romantic comedy of them all. Brilliant ballerina Cyd Charisse is in the Garbo role, playing a Russian envoy who's sent to Paris to bring home the nation's greatest composer, but is seduced by the city - and the American movie producer she meets there (Fred Astaire). Most of the plot and many of the best lines remain intact, while Charisse's communist commissar affects a Garbo accent, rather than a Russian one. While that does highlight the obvious superiority of the original film, there's still a great deal to enjoy here. Taken on its own terms, Silk Stockings is sleek and breezy entertainment.

Astaire, about to make his second of four retirements, is in good form and his numbers with Charisse are very attractive - if lacking the spark and sizzle of those in The Band Wagon. All of You is the obvious stand-out, both in its original incarnation and a glorious warehouse reprisal, though Cole Porter's score is positively littered with fun tunes. Charisse does some sensational work to the lyrically slight Red Blues, brassy Janis Paige sings the smutty stomp Josephine, and she and Astaire poke fun at cinema's passion for frightened innovation in Stereophonic Sound. The climactic Ritz Roll and Rock is both impressive and quite silly, as it suggests that fleet-footed Astaire and his high society pals from the stage-show-within-a-film can rock out far more comprehensively than Elvis. I don't really buy it.

As a special treat for Golden Era buffs, Silk Stockings also features a most peculiar and welcome sight: Peter Lorre dancing. The star of M, a recurring Hitchcock heavy and all-round mercurial wizard of the screen - by this time displaying a latter-day wideness rarely seen outside of James Cagney's films - Lorre great fun as a fibbing, carousing rogue of a Russian diplomat. Arriving in a distressed state in the early hours, he rubbishes suggestions from his colleagues that he's been out on the town by claiming he's been having a manicure. "At two o'clock in the morning?" a comrade enquires. "I cannot sleep with long fingernails," he replies. Lorre also does one of the silliest dance routines I've ever seen, hoisting himself up between two chairs and swinging his legs back and forth in time to Porter's Too Bad.

Silk Stockings isn't a classic to rival Ninotchka, but as these musical remakes go, it's good value - with attractive leads and a handful of great numbers. Charisse, who passed away in 2008, is really something to behold when she's in full flow. Usually it's impossible to wrench one's eyes away from Astaire, but she's a most inspiring diversion. (3) 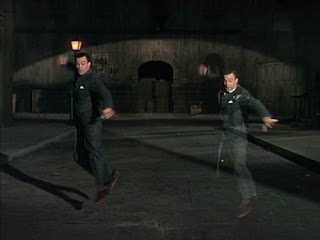 Cover Girl (Charles Vidor, 1944) is worth it for the dancing - much of it choreographed by co-star Gene Kelly, in just his fourth musical. Rita Hayworth is a stage-star who spies a path to the big-time via a magazine beauty competition. Though she gets the gig, thanks to the sentimentality of a big shot who once dated her grandmother, it puts a strain on her relationship with boyfriend and former boss Kelly. That hackneyed but involving plot, which borrows from the Jessie Matthews musical Evergreen, is a springboard for some very interesting routines. The lovely Make Way for Tomorrow sees Hayworth, Kelly and comic foil Phil Silvers dashing around a vast set, arm-in-arm, while the ebullient Put Me to the Test is an energetic stage-set number teaming Gene with a succession of partners. The absolute highlight is Kelly's Alter-Ego Dance, in which he hoofs opposite a transparent version of himself. Until you've seen the screen's second greatest dancer leap over his own head, you haven't really lived. Elsewhere, the staging is just peculiar. During the title number, Hayworth descends the biggest staircase this side of The Great Ziegfeld. When she gets to the bottom, she just sort of waves her arms around a bit. I take it Kelly didn't devise that dance. Poor John, dubbed by Martha Mears, as were all Hayworth's numbers, features the oddest (Cockney?!) accent I've ever heard. The choreography and costumes are almost as weird.

Cover Girl is too spotty and muddled to be ranked with the best musicals of the period, but it's a valuable snapshot of one of cinema's greatest creative forces at an important stage in his career. In the film's key numbers, Kelly's sense of ambition is already much in evidence - though it was only once he was given bigger budgets and more significant talents to work with that he really came into his own. Even so, he reportedly cited the Alter-Ego Dance as the most difficult routine he'd ever crafted, and it is a phenomenal achievement*. Hayworth, who Fred Astaire regarded as the best of his own partners, is good value in the lead, and displays a depth of emotion that transcends the slightly stale script, while Phil Silvers and especially Eve Arden provide exemplary comic support. Silvers - later TV's Sgt Ernie Bilko, of course - even does a couple of song-and-dance bits. (3)

*Trivia note: Fred Astaire would offer his own variation on the routine two years later - Puttin' on the Ritz - backed by no fewer than nine Astaires. The way Kelly and Astaire pushed one another to ever greater heights during this period is exhilarating. 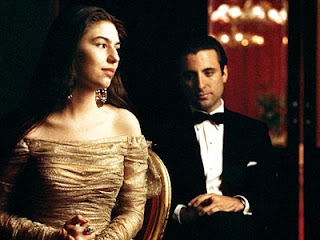 "I would burn in hell to keep you safe."
*SOME SPOILERS*
The Godfather Part III (Francis Ford Coppola, 1990) is an unnecessary follow-up to the devastating gangster epics that defined the '70s. Al Pacino, who in the intervening 14 years had begun shouting a very lot, returns as Michael Corleone, the mafia don who's going legit - with a little help from the Catholic Church. Also along for the ride is his brother Sonny's non-legit offspring, Andy Garcia, whose unquestioning loyalty just about makes up for his appalling temper - and the fact he's got the hots for his cousin, Michael's daughter (Sofia Coppola). The film begins with a set of sumptuous tracking shots around various unpopulated ruins that suggest this is going to be "Terence Davies' The Godfather". Alas, no. Instead, we're pitched into an overambitious story concerning high finance, Papal assassination and moral absolution that dwarfs the curiously uninvolving Garcia-Coppola romance.

Screenwriters Coppola and Mario Puzo strain to make each line a killer - when they're not penning exposition - meaning that the script is clunky and often lacking insight. Take the scene between Corleone and estranged wife Kay (Diane Keaton). "I don't hate you, Michael" she says. "I dread you." So far, so agreeably unexpected, but they won't shut up - and the resulting exchanges are first overdramatic and then superfluous. "I did what I could, Kay, to protect all of you from the horrors of this world," he says. Her reply? "But you became my horror. The children still love you, though. Especially Mary." Err, great. Mary, for her part, has come in for a bit of flak - some of it deserved. Though the director's daughter has an interesting face and excels during one heartbroken exchange (the "I'll always love you" bit), her delivery is often distressingly wooden in a way you rarely see on screen. And while her beau Garcia is unquestionably charismatic, he's also cliched and dull: if he's his generation's answer to James Caan, perhaps we should rephrase the question. Robert DeNiro was turned down for that part, while Robert Duvall's character was killed off after he asked for $5m and Coppola threatened to write Pacino out of the series unless he settled for $2m less than he wanted. That wrangling - and the director's threat therein - betrays the poverty of vision here, with use of footage from the earlier films suggesting desperation rather than an epic sweep, as well as showing exactly how far Coppola had fallen.

The film isn't a complete write-off, though, boasting a hit-by-helicopter that's utterly unexpected and thus entirely great, some fine individual scenes - like Pacino's confession at the Vatican and his son's performance of the series' famous love song - and that certain brown wood-panelled glossy look unique to these films. It's also rarely dull, moving at a fair clip and balancing plot, action and character drama in the traditional manner. But it's rarely special - and within the context of this trilogy, that's pretty damning. (2.5) 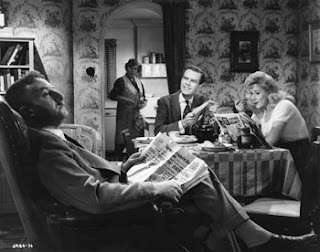 I'm All Right Jack (John Boulting, 1959) is a celebrated British comedy about industrial relations that's sunk by the biliousness of its "anti-everything" attitude. It's also not that funny. Ian Carmichael is a toff who enters his uncle's business at the low end and finds he's fatally distrusted by his working class colleagues - including shop steward Peter Sellers (who's as good as ever). There are some impressive moments, but its sporadic joviality can't mask an appallingly low opinion of its subjects - and of British industrial workers in particular - that's extremely hard to swallow. (2.5) 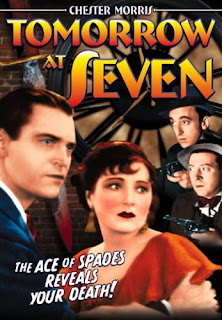 Tomorrow at Seven (Ray Enright, 1933) is like a Monogram Chan before the fact: a creaky, archaic mystery with a none-too-surprising culprit - but fun just the same. Chester Morris (later Boston Blackie in Columbia's exceptional B movie series) is a novelist investigating the inspiration for his latest book, a killer known as The Black Ace. He travels to see wealthy Henry Stephenson, who's also researching said homicidal maniac, and before you can say "when you finish that jigsaw, it's going to contain a threat from the killer", Stephenson's secretary finishes a jigsaw, and finds it contains a threat from the killer. This is a slow-moving production that recalls movies made in the early days of sound cinema, but the name cast keeps the questionable narrative afloat and it's a delight to see legendary character actors Frank McHugh and Allen Jenkins as a pair of thick cops. "Anyone touch the body?" a creepy coroner enquires of them. "Nobody," replies McHugh confidently. "Only Dugan and me and Drake and that guy Henderson and Broderick." (2.5) 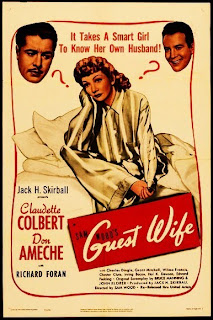 Guest Wife (Sam Wood, 1945) reunites the stars of the brilliant romantic comedy Midnight, as happily married Claudette Colbert ends up spending an inordinate amount of time posing as the wife of her husband's best friend (Don Ameche) in a bid to save the guy's job. It's OK, but the comic situations are often more stressful than funny, and the usually reliable Ameche is both cartoonish and flat. Still, Colbert does her best with the material, while character comedians Charles Dingle and Grant Mitchell work wonders in their supporting parts. Dozens of familiar faces crop up in small roles, including Irving Bacon, Harry Hayden and Chester Clute, playing a town gossip accused of voyeurism. The climactic sight gag is the best joke in the film. (2.5)
Posted by Rick Burin at 07:48