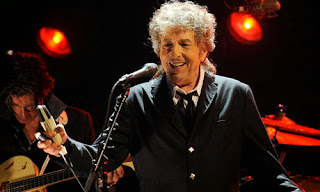 Every Dylan gig seems to bring something new: a reggae version of A Hard Rain's a-Gonna Fall (Manchester, 2005), a bit where Bob does a little dance to Highway 61 Revisited (Sheffield, 2009), or an engaging spot of mugging to his band as he sings about pants (Hop Farm, 2010). This time he's back at the Albert Hall - a relief to those of us who've turned up, as his legendary, much-bootlegged "Royal Albert Hall" gig of 1966 was actually recorded at Manchester's Free Trade Hall, and I had visions of him pitching up there to find it's now a hotel - and he has three innovations to share with us.

A mesmerising reimagining of Tangled Up in Blue, both jaunty and poignant, complete with new words, a new sound and a melody that he may well be making up as he goes along. A bit where he touches - like, actually goes towards and then touches - the hands of people in front row, as if he likes them. And a wild white Jewfro. There's also an interval, so Bob can go and have a cigarette, a nap and a cup of Horlicks, because he's 72.

The setlist will be familiar to anyone who keeps tabs on such things, as (give or take a song or two) it's the same one he's been playing throughout this European tour: 19 songs, including six from before Time Out of Mind and six off his slightly underwhelming latest, Tempest. Resplendent in a slightly crap black and white waistcoat - and spats! - he kicks off promisingly with a clipped, forceful version of Things Have Changed and a spirited She Belongs to Me, moves through a functional Beyond Here Lies Nothin' - playing a grand piano tonight rather than his usual keyboards - then breaks out that plaintive piece of self-examination, What Good Am I?, from 1989's Oh Mercy, here given the tender treatment.

I was hearing a few of these songs for the first time live, and the sprightly Duquesne Whistle - armed with one of those simplistic riffs to which Dylan has become latterly addicted - was a bit of a treat; lyrically unambitious but eminently danceable. After the sweet if minor Waiting for You (a conventional love song from, err, the soundtrack of The Divine Secrets of the Ya-Ya Sisterhood), we get four tracks of solid greatness, the kind of mid-concert run that is becoming a leitmotif of the modern Dylan gig-going experience. And, as usual, High Water is involved.

He begins it with Pay in Blood, the closest Dylan is ever going to get to writing a gangsta rap song (you imagine). Or Wise Guy by Joe Pesci. I wasn't that wowed by the album version, but live it's transformed into a beast: a nasty, violent and unrepentant bad guy's boast-athon, with Dylan spitting the words from centre stage. Tangled Up in Blue, nowadays generally sung in the third person (as it was on the first, "acetate" attempt at Blood on the Tracks) is showered with a heap of new lyrics - including a neat verse about the importance of trust - and a committed vocal. Not bad considering that it's his 1,358th crack at doing the song live (I feel for the person charged with uploading that information).

I think something is lost from Love Sick when Dylan isn't being surrounded by women in their underwear like in that ad (I don't, I think that was one of the stupidest things Dylan ever did - and he used to duet with Joan Baez), but he atones with a pounding, jarring reading of this anti-love anthem, the first song on arguably his greatest record. And that was the first half over, Dylan leaning in to the mic to announce a 15 or 20 minute interval. My wife translated. What I heard was: "Aye-hay, aheehuhhurrhurr inaboutafifteeeenortwennymuhhurr." (I hope this was some salve to that large section of the audience who invariably complain that Dylan doesn't chat much, has gone a bit growly since 1963 and won't project his grizzled fizzog onto a succession of big screens.)

After disappearing for more than a half-hour (I presume it was a big cup of Horlicks, or he'd got trapped under his blanket), Dylan leads off the second half - and caps that unmissable four-song run - with High Water, the key track off his 2001 album, Love and Theft, which lacks the breathless urgency and wry humour with which Dylan invested it at Hop Farm, but still sounds utterly fantastic. Then he's into a lovely take on Simple Twist of Fate - after Tangled Up in Blue, the second of the night's songs from his seminal 1974 break-up album, Blood on the Tracks - before for some reason playing Early Roman Kings, which is one of the worst things he's written in years and fills the "interminable blues" slot previously populated by Summer Days, which he finally retired last year. I'm all with a band jamming, especially one as good as Dylan's, and the places they go with many of these songs are remarkable. But Early Roman Kings is just one thing repeated, apparently forever, and it was the only point during the gig when I thought: "OK, enough of that one, do something else."

Thankfully that something else was Forgetful Heart, a beautiful ballad from Together Through Life, and comfortably the second best song on that record (after I Feel a Change Comin' On), featuring that perfect couple: "The door has closed forevermore/If indeed there ever was a door", which destroys me every time. With a quiet, violin-led accompaniment, Dylan can sing without straining to compete with the volume (why not just turn him up in the mix?), proving beyond doubt that the low spots of Tempest were a blip, rather than the sound of his voice finally giving out. On a few of tonight's songs, it can be a struggle to make out what he's actually singing about, unless it is indeed "Ahurrhurr, a hurrheehurr".

Dylan has played Spirit on the Water, a delightful number stuffed with great lines, every time I've seen him since 2007, but - to paraphrase that Albert Hall bootleg, "it used to go like that, and now it goes like this..." - less gentle, less delicate, but still just as transfixing, and with the same scope for audience interaction ("You think I'm over the hill?" "Noooooooooo!"). Then he ends the main set with a trio of songs from Tempest, all given the same lolloping, reflective treatment: Scarlet Town, the rather good Soon After Midnight, and Long and Wasted Years, which draws a prolonged standing ovation.

The hollers of the crowd bring the usual response: a two-song encore comprising an explosive All Along the Watchtower - one of the best I've heard him do, with a quiet-loud-very quiet-boom template that the Pixies would have been proud of - and a solid Blowin' in the Wind: not the magnificent rock-out we've had in more recent years, but a heartfelt if somewhat overly throaty reading. And then he's gone, back to his Horlicks before the houselights are switched on. "Must Be Santa!" we cry, ignoring the fact that he's not coming back and he has a pre-determined setlist anyway. "Judas!" we shout, as the realisation dawns. But it's been another great night: my seventh Dylan gig and the best since 2009, those magical nights studded through my life, each happily coinciding with some special, personal reason to remember, along with the sheer glory of the music. And the wonder of Dylan's thin, wild mercury hair.