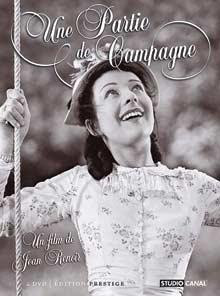 Partie de campagne (Jean Renoir, 1936) is one of the great unfinished films. Usually such projects exist in tantalising snippets because a director snuffed it before realising his vision, or failed to get a movie off the ground due to short-sighted financiers. In this case, Renoir quit because it kept raining. Admittedly it rained for much of a six-week shoot, but even so... Happily, the 40-minute Partie de campagne doesn't seem unfinished, with an intriguingly-paced three-act structure that works just fine and a heady summer atmosphere that stands as perhaps the most inspired example of its director's quiet lyricism. It's an often breathtaking pastoral film, creating a fully-realised rural world a la Tol'able David and Louisiana Story (see #24) into which to throw our protagonists.

Sylvia Bataille is Henriette, a Parisian girl who decamps to the countryside for the weekend with her parents, her grandmother and her fiance. There, she and her mother (Jane Marken) encounter a prospective-family-man-cum-intense-romantic and his caddish mate, who sweep them off their feet and onto a pair of rowing boats. But this is 19th century France, and the ties that bind won't slacken just because someone's fallen in love.

The film is gentle, entertaining and sometimes very funny, benefiting from superb performances by Bataille, Marken and young romeos Georges D'Arnoux and Jacques B. Brunius, a luscious musical score composed for its 1946 release and Renoir's effortless, transcendent handling of the material. Its coda is absolutely heartbreaking: the perfect wrap-up for a film that's shot through with unshakeable conviction and a tangible love of the countryside. Renoir's fondness for Bataille's expressive, elfin face is just as obvious - he would return to it later the same year in his fascinating serio-comic polemic Le crime de Monsieur Lange. A set piece here that sees her guilelessly embrace the pleasures of a swing is slight but somehow unforgettable. Elsewhere, Renoir's script matches the exalted treatment, encompassing as it does themes of nostalgia, teary joy and the essence of being.

But Partie de campagne does have one - perhaps major - flaw, so bizarre as to be unintelligible. That's the presentation of the father and the fiance, Anatole, as music hall imbeciles. The younger is particularly ridiculous, resembling a young Stan Laurel as he repeatedly squawks and wobbles his bottom lip. For that matter, the dad looks not unlike Oliver Hardy. Really odd. Perhaps Renoir, adapting Guy de Maupassant's novel, is making a satiric point about the unredeemable unsuitability of the young couple, or the ineptitude of Parisians cast adrift several miles from the big city, but it's a directorial decision that's never really justified.

Still, that's the only gripe about this amazing piece of work, which largely hums with brilliance and ultimately stands shoulder-to-shoulder with La grande illusion (see #62) as the director's greatest achievement.(4)

Trivia note: That's Renoir himself as the restaurateur, Poulain.
Posted by Rick Burin at 21:03