An interview with Richard Herring

"I didn't want to preach to the converted." 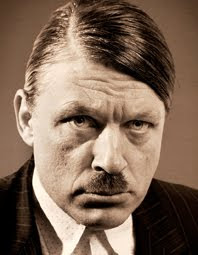 Hitler's moustache will be on show in Harrogate on Monday.

The offending square of facial hair, once modelled by Charlie Chaplin but now more associated with pure evil, will be attached to the face of the excellent stand-up comedian, Richard Herring. Herring’s excoriating, sporadically childish assault on racism and liberal mores – Hitler Moustache – comes to Harrogate Theatre this week.

The comedian says he had been wondering “why this once quite fashionable moustache wasn’t allowed any more”, so last year he decided to fashion one for himself, reporting the results in his weekly podcast, recorded with broadcaster Andrew Collins. He says: “I did it in the podcast – I had a Hitler moustache in the house, just to see how that felt. I was a little bit nervous about what would happen to me and how liberals would respond. I was thinking about whether that would make racists more liberal than liberals and I came up with the routine from that.”

The show changed direction after the BNP’s election success in June, with the comedian taking aim at voter apathy. “I had the moustache for a week and I thought I would have to do it again, but the day I had chosen was the day of the BNP’s success,” Herring says. “I had to think: ‘Is this going to mean something else today?’ It wouldn’t have been unreasonable for people to assume I was celebrating the BNP’s success. They had been successful because people hadn’t gone out and voted and I wanted to talk about how voting is important and how there must be something better than being represented by a racist.”

The show also plays around with its audience’s prejudices and preconceptions. “It has to have a substance to it, otherwise it’s just a 42-year-old man with a Hitler moustache,” Herring says. “And I didn’t want to be preaching to the converted, so a lot of it is about liberalism.”

Not that the show is remotely po-faced. “It’s funny all the way through and a little bit childish. My comedy isn’t for everyone – this is quite an edgy show,” he says.

Hitler Moustache caused a brief storm last year, after Guardian journalist Brian Logan claimed Herring was one of “the new offenders”, quoting lines from the comedian’s show that the comic says were taken out of context and portrayed him as racist. “I thought it was awful, that I could get killed in the street after the way I appeared in that article – and justifiably so,” Herring says. “A man with a Hitler moustache, who supposedly hates Pakistanis? I can understand why that might make someone angry. But it worked out alright in the end - it meant everyone was talking about the show and coming to see it. I should probably give Brian Logan a cut.”

Herring, who was a TV regular in the ‘90s as part of a double-act with Stewart Lee and has written for and appeared in sitcoms, sketch comedy and panel shows, says stand-up is his favourite medium. “Stand-up wasn’t really my forte - it is now,” he says. “It’s about that immediate reaction from an audience. If I had to choose one thing to do for the rest of my career, it would be stand-up.”

Herring has also embraced podcasting - creating audio shows that can be played on a computer or MP3 player. As well as making more than 100 podcasts with Andrew Collins, he has created a topical sketch and stand-up show - As It Occurs to Me (AIOTM) - with each episode written during a single week and recorded live at the Leicester Square theatre in London.

“I quite like the rawness of it,” he says. “It’s very stressful and it uses up a lot of time, but I really believe that eventually talent and hard work will pay off and things will happen for you. The great thing about podcasts is that I can just do it, rather than sitting at home waiting for people to OK my script.” Eight more episodes of AIOTM are planned for May and June, with another to be recorded at the Edinburgh Fringe.

As for the Hitler Moustache tour, Herring says it’s been “pretty good” so far, and he’s looking forward to coming to Harrogate. “You don’t really get much idea of a place when you only come for a day, but the theatre is really lovely,” he says. “I remember some swanky looking shops, as well.”