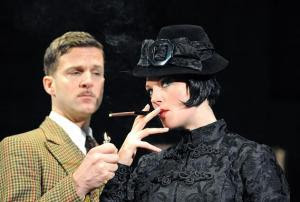 Dugald Bruce-Lockhart and Katherine Kingsley in The 39 Steps.

Dugald Bruce-Lockhart has the matinee idol looks to play any version of Richard Hanney, the hero of John Buchan's classic spy novel - but it takes a performer with his broad comic smarts to nail the one we find in Patrick Barclay’s 2005 play.

That Hanney is an incorrigible, skirt-chasing saviour of the free world, who takes to hammering down the fourth wall in his opening speech. He’s the ever-moving centrepoint of a richly comic, self-reflexive take on the well-worn story that’s designed for a cast of just four and jettisons thrills in favour of laughs.

The winner of the Best New Comedy award at the 2007 Oliviers, Barclay’s version is more concerned with mocking the artifice of theatre and the behaviour of its characters than keeping the tension at fever pitch.

Drawing on both the book and Alfred Hitchcock's brilliant 1935 film, the play premiered at Leeds' West Yorkshire Playhouse in 2005 and has gone on to be a West End and Broadway smash. The production currently playing at York's Theatre Royal is dizzyingly entertaining, with Hanney's crippling sense of boredom and self-doubt largely confined to his opening monologue – to be forgotten about as soon as he begins pursuing a pouty German (Katherine Kingsley), only to find a corpse on his hands.

The play draws most of its laughs from the intentionally minimalist production values. The two hoods staking out Hanney’s apartment bring their own streetlight with them, a train pulling into a city is signified by a toy engine and someone pushing a sign reading ‘Edinburgh’ onto the stage, and the characters climb out of windows by pulling the frames over their heads and down past their legs.

There are also gentle digs at the British class system, the clean-cut heroism of Hanney (a police radio announcer appears to be smitten with the “very handsome” suspect) and the screen presentation of movie romance, along with a neat little puppet show and some good old-fashioned silliness.

The latter results in the play’s two biggest laughs – one in each half. The first sees Hanney removing a clue from the hand of a dead woman by using the murder weapon as a lever. The second ends an inspired diversion into drama - our hero's impassioned plea for leniency in a world gone mad - with Hanney offering an absurd mispronunciation of a local politician's name.

With his pencil moustache, impeccably pomaded hair and nicely-pressed tweeds, Bruce-Lockhart looks the part as Hanney, and he has the confidence, ready wit and gift for self-effacement to make the role his own.

The diminutive, balding Dan Starkey, introduced as the memory man, excels as a scowling hitman, makes a passable job of playing an assortment of women, and offers his most memorable (pun intended) contribution as a very quiet public speaker. That sublime bit of visual and barely audible comedy is a definite highlight.

Kingsley is also good value as the initial murder victim, the love interest and a put-upon Scottish housewife, with Braine the weakest of the four as he slightly over-eggs his delivery. He's still pretty good, though.

The 39 Steps is a delightful diversion: clever, funny and with that most welcome commodity - a cast that seems to be having a great time.
Posted by Rick Burin at 07:42