I've talked about Deanna Durbin before, because she is awesome. For a quick potted history, go here. Here are a couple more reviews, dealing with her final film - and then perhaps her oddest. 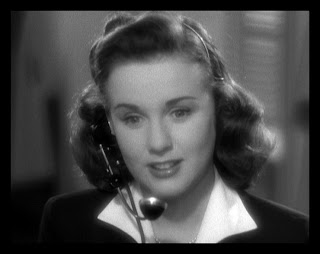 For the Love of Mary (Frederick de Cordova, 1948) – Former child star Deanna Durbin has at least five classic musical comedies to her name, but she was notoriously critical of her final quartet of movies. "Just take a look at my last four films and you’ll appreciate that the stories I had to defend were mediocre, near impossible," she said in her only post-retirement interview. This, the last, is arguably the best of them (though Something in the Wind has Donald O'Connor doing an earlier version of his Make 'em Laugh routine), as she genuinely gives her all to a film in which she has to wear a fake moustache while serenading Don Taylor in a park with an aria from The Barber of Seville, before falling in a lake. It's a silly but pleasant love square, in which fish expert Taylor, lawyer Jeffrey Lynn and completely unsuitable light leading man Edmond O'Brien (playing a naval officer) compete for Deanna's affections. And as she's a White House switchboard operator, naturally the President and his secretary (Ray Collins) keep sticking their oar in. Presumably the Russians weren't up to much that month. There aren't many laughs, but it's generally entertaining and sustained by Durbin's lovely, unaffected central performance. She was such an appealing presence and she had a wonderful voice – her spellbinding reading of I'll Take You Home Again, Kathleen is the unquestioned highlight. It makes the hairs on the back of the neck stand up. Durbin retired to Paris the next year, aged 27, marrying Charles David, who had directed her in her last truly great film, Lady on a Train. (2.5)

Here's what happened when Jean Renoir tried to make a Deanna Durbin film: 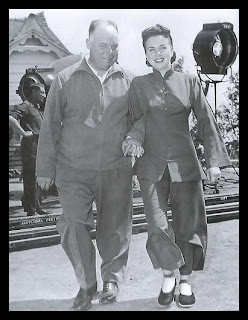 The Amazing Mrs. Holliday (Bruce Manning, 1943) is an uneven, frustrating WWII comedy-drama, worth seeing for Deanna Durbin's sensitive, beguiling performance, the best of her adult career. She plays a schoolteacher and missionary's daughter who comes to America with a gaggle of war orphans and has to pose as the widow of a wealthy sea captain to keep them together. Then the dead guy's grandson (Edmond O'Brien) starts taking an interest. The film was started by Jean Renoir off the back of Swamp Water. He was a fan of Durbin and regarded her as "ravishing", but dropped out of the project after interference from the studio, Universal. (We are talking about a man who didn't finish perhaps his greatest film, Partie de campagne, because it was raining.) His brilliantly-directed rustic footage is used as a flashback and offers a tantalising glimpse of what might have been, before apparent plans for a grown-up, humanist drama somehow morphed into this clumsy amalgam of effective sentiment, forced conflict (the plotting really doesn't make sense) and laboured comedy. The director said later that Durbin was "imprisoned by the genre that made her a success" - one he could not master - and criticised both the script and the manner of improvisation encouraged by producer Bruce Manning. Though two-thirds of the finished film was apparently shot by the French director, much of that was under pressure from executives following round-table discussions. Having taken over, Manning pieced together the existing footage and shot new scenes, including extra musical numbers.

The movie is at its best in the gentler moments, Durbin's nuanced characterisation to the fore, her expressive face articulating fear, resolve and quiet sorrow. There's one particularly striking close-up of the star that has Renoir's pawprints all over it. In contrast, the film's comic interludes seem incongruous and completely unnecessary, aside from a brilliant cameo from Gus Schilling near the end that comes out of nowhere and is hysterically funny. NB to Universal: if you're going to cast aside your potential masterpiece in the name of commerciality, at least try to include a few good jokes. Durbin's music is typically transcendent, particularly the glorious version of Mighty Lak' a Rose, though the numbers are shoehorned in even more arbitrarily than usual (her less inventive films tend to climax with a big charity fundraiser in which she sings). Elsewhere, peacetime makes the propagandist opening a bit of an uncomfortable watch, while time itself has rendered the billing of one young actor as simply "THE CHINESE BABY" slightly unacceptable.

It's not a great film, but for classic film fans it's essential viewing as both a picture of Durbin at the peak of her powers, and a curio: another cautionary tale of what happens when a maverick goes head-to-head with a massive fucking corporation. (2.5)
Posted by Rick Burin at 07:42