Nothing Lasts Forever, Woody at his best and Douglas Sirk in the noughties - Reviews #102

"I like a Gershwin tune/How about you?" Yeah, loads, and there are plenty in Woody Allen's Manhattan, which wowed me for the umpteenth time last weekend. Also in this batch of reviews: further artful use of black-and-white in the hard-to-find '80s cult item Nothing Lasts Forever, The Academy of the Overrated's Michael Mann in atypically fine form, and The Gruffalo crashing a lesbian household.

*SPOILERS*
“I had a mad impulse to throw you down on the lunar surface and commit interstellar perversion.”
Manhattan (Woody Allen, 1979) – This brilliantly-written study of relationships in modern-day New York was Woody’s first truly great film. He plays a neurotic TV comedy writer – surely not! – who’s dating a high-school student (Mariel Hemingway), but lusts after opinionated journalist Diane Keaton, the mistress of his best friend (Michael Murphy). The scene in the planetarium is a particular wonder, and Allen and Murphy's climactic showdown is a comic masterpiece ("'I liked her first'? What are you, six years old?"). But it's superb all round: wonderfully-photographed in black-and-white, scored by peerless Gershwin tunes and boasting a brilliant supporting performance from Hemingway, all building to a typically-inspired Woody pay-off: “You have to have a little faith in people.” (Smile.) Sob. (4) 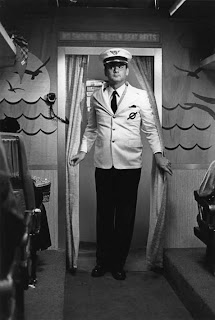 Nothing Lasts Forever (Tom Schiller, 1984) – One-of-a-kind fantasy-comedy set in an alternate past (bizarre future?) and shot in the style of a ‘30s studio movie, albeit with vivid snippets of newsreel and stock footage, Bunuel, Griffith and Eisenstein. Zach Galligan is an artist (medium undecided) who returns from Europe to make his name and finds Manhattan locked-down by the port authority, in the midst of a 100-day strike. Cue adventures in Dada, highways management and moon travel, appearances from Dan Aykroyd and Bill Murray, and a musical number set in a lunar greenhouse. Friend-of-Gizmo, Gilligan, can be a little callow as a lead, but here his slightly uneasy quality is put to fine use. This is a true original – albeit with nods to both Kafka and classic sci-fi movies – with a superb score from Howard Shore and a look and feel that’s all its own. (3.5) 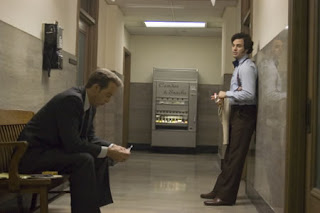 *MINOR SPOILERS*
Zodiac (David Fincher, 2007) - This is perhaps Fincher's best to date (it's a toss-up with Seven): a riveting, meticulously-detailed procedural, with a few early excursions into slasher territory, that charts the investigation into a still-unsolved murder spree that took at least seven lives and consumed three others: those of an obsessive cartoonist-cum-author (Jake Gyllenhaal), an alcoholic journo (Robert Downey, Jnr.) and a hard-working cop (The Gruffalo). The script wears its rigorous research lightly, the direction is virtuosic and The Gruffalo stands out in an ensemble that doesn't put a foot wrong, though if the film has a failing, it's that the character drama isn't always as pronounced as it should be and does occasionally lapse into cliche. Still, it's utterly gripping, immersing you in the thankless, plodding world of police work - alive with minor victories - even if I find it hard to believe that a Joel McCrea fan and silent film cheerleader called Rick could possibly be considered a suspect in a crime. (3.5)

The Insider (Michael Mann, 1999) is a superb drama about pasty Big Tobacco exec Russell Crowe and how his life unravels after he tries to turn whistleblower for 60 Minutes producer Al Pacino. I’m largely immune to Mann’s movies – Heat and Ali are two of the most boring, badly-directed films I’ve ever seen – but here his domestic fixation and penchant for lonely saxes and scenes of people wandering on the beach at night fit the material perfectly, and his pacing and skilful handling of the narrative are reminiscent of Sidney Lumet at his considerable best, aside from the needless repetition of footage from the doc-within-the-film, which is a minor complaint. He’s aided by an exceptional cast – the hammy Michael Gambon aside – with Crowe unquestionably the standout in a complex part. Mann’s script, co-written with Eric Roth, is eloquent and cleverly heightened, though the alleged zingers they feed Pacino are a bit of a misstep – they seem out of place and they’re not funny. What is funny is the scene after the deposition, where Crowe is standing on a lawn in the half-light and he looks like W.C. Fields. He should have just run all the Big Tobacco bigwigs off the road and into a ditch, tooting his horn. Still, The Insider is an important, impassioned and very entertaining film: its engrossing story lit by fine performances. (3.5) 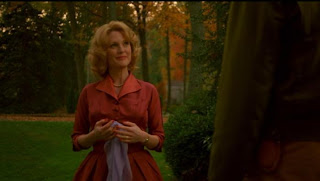 Far From Heaven (Todd Haynes, 2002) is an expert pastiche of Douglas Sirk melodramas of the 1950s - particularly All That Heaven Allows and Imitation of Life - that also stands on its own two feet. The gimmick, and there is always one where homages are concerned, is that Haynes deals with themes that were resolutely off-limits for moviemakers during the Eisenhower era, like homosexuality and inter-racial love. Julianne Moore is the smiling housewife whose apparently perfect existence is shattered by the revelation that her husband (Dennis Quaid) is gay. She seeks solace in the company of her black gardener (Dennis Haysbert), but it turns out that small-town housewives of the 1950s will talk... Haynes's florid recreation of the style of classic-era "women's pictures" is meticulous, the cast is uniformly fine and there's a terrific, backwards-looking score from Elmer Bernstein that captures the essence of the genre. The director's script is literate but admirably straightforward: particularly the matter-of-fact way it deals with the process of "curing" homosexuality, which is both insightful and genuinely shocking. Significantly, Far From Heaven makes a welcome break from the popular presentation of the '50s as a time of optimism, swinging hips and tailfins, showing it instead as a period of emotional repression and stifling conformity: the projected image defended at all costs against the stark reality. To get the full effect - and appreciate the dark humour of the opening reels - a crash-course in Sirk would definitely help, but I think you can appreciate the film regardless, as a deliciously mannered portrait of an ideal crashing quietly to the floor. (3.5) 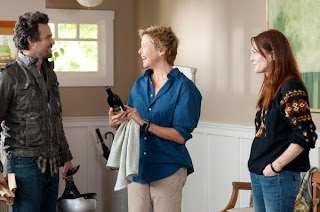 The Kids Are All Right (Lisa Cholodenko, 2010) – Entertaining comedy-drama in the Jason Reitman/Tom McCarthy vein - though from a female perspective - the lightness of the approach belying the amount going on under the surface, as lonely sperm donor Mark Ruffalo becomes acquainted with lesbian couple Annette Bening and Julianne Moore, and the two teenage offspring he never know about. The performances are excellent, particularly from Ruffalo and daughter Mia Wasikowska, but while the film certainly has its moments, it doesn’t always achieve the emotional resonance you might hope for, or expect. The way the inevitable appearance of Joni Mitchell’s Blue is crowbarred into the storyline, late-era Woody Allen-style, is also a bit crap - though the pay-off isn’t bad- while the whole film climaxes with a fucking group hug. Still, the performances make it, and it’s nice to find another mainstream-ish Hollywood film dealing with grown-up subjects like female sexuality in an intelligent way (you get to see one of Julianne Moore’s boobs at one point!). If you like it, the 1992 indie Gas, Food, Lodging has a somewhat similar angle on life, as well as one of the greatest performances I've ever seen, from a 17-year-old Fairuza Balk. (3) 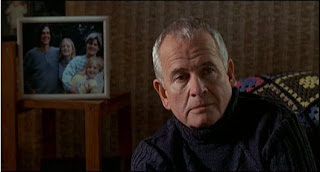 *SOME SPOILERS*
The Sweet Hereafter (Atom Egoyan, 1997) – Freezing, powerful Egoyan drama about lawyer Ian Holm trying to persuade the folks of a small Canadian town to file a negligence claim, after the bus crash that killed most of their children. Holm is absolutely terrific and the sequences portraying his travails with his drug addict daughter are sledgehammer stuff, but the small town scenes are a little less consistent – helped by vivid direction and a spellbinding musical score, but alternately too vague or too obvious in the scripting. Sarah Polley, who memorably stuck it to Disney back in the day, is quite good in a crucial supporting role, though Tom McCamus doesn’t really cut it as her abusive father. And he looks a lot like Tommy Wiseau. (3) 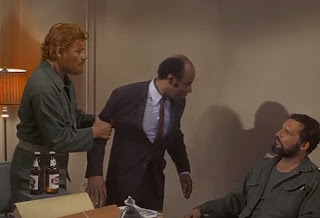 Topaz (Alfred Hitchcock, 1969) – Hitch’s powers were waning when he helmed this overly static espionage film, centring on the Cuban Missile Crisis, but it is notable for one excellent set-piece, in which intelligence service pawn Roscoe Lee Browne liberates some top secret plans from a hotel crawling with Cubans. Elsewhere, some nice directorial touches can’t really enliven lots of scenes of people just sitting around talking, at least until Philippe Noiret turns up a half hour from the end and the plot goes all Tinker, Tailor. I did enjoy Frederick Stafford’s leading man routine, but the rest of the international cast is a little nondescript. The scenes on the roads around Gard du Nord feature some of the ugliest process shots I’ve ever seen. (2.5)

NB: Hitch's cameo pre-dates Little Britain by a good three decades. He's a fella in a wheelchair at the airport who rises to his feet to shake hands. 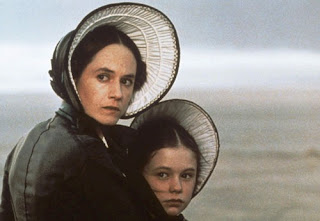 *MAJOR SPOILERS*
The Piano (Jane Campion, 1993) – Interesting, lushly-made drama about a mute Scottish woman (Holly Hunter) who is to marry a man she has never met (Sam Neill), and so moves to New Zealand with her daughter (Anna Paquin) and her piano, but finds herself flung around by her unpredictable will. Bribed into sexy-time with the badly miscast Harvey Keitel, she unleashes a torrent of jealousy, finger mutilation and piano music. It’s a good film, with a setting amongst the Maoris that’s rarely seen on screen and an involving story, but it never quite hits the emotional high notes, lacking real resonance even as Michael Nyman’s superlative score booms and tinkles. Perhaps Keitel’s weird, unconvincing performance is partly to blame, snapping you out of the story just as soon as you’re becoming immersed in it. Hunter is fine in a demanding part, though the really stellar performance is by Paquin – particularly good as her conflicted, confused, constantly-singing little girl. (3) 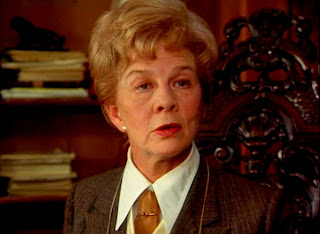 The Cat and the Canary (Radley Metzger, 1978) - Ten millionth version of the creaky old stage play, in which family members gather for the reading of a will, but are picked off one-by-one by the cat-obsessed psychopath roaming their ancestral home. The film is awash with problems: it's far too talky, the plotting often makes no sense (always best to go off on your own to the cellar when there's a murderer loose, I find), the frequent wisecracks mean literally nothing and the younger cast members are terribly bland. But it is salvaged somewhat by the welcome presence of three old-timers. Wendy Hiller is good-natured and effortlessly charismatic as the knowing executor, stage legend Beatrix Lehmann gives a masterclass in absent wandering - playing the creepy housekeeper - and Wilfrid Hyde-White has an amusing bit as the benefactor, appearing from beyond the grave via film footage - a plot point borrowed from the George Arliss vehicle, The Last Gentleman. There are also a handful of nice, old-school horror shots. We see the killer looming large behind his unwitting victims, and, best-of-all, lurking by a bed to grasp at a diamond-studded necklace, like some magpie Nosferatu. For Hiller completists, it's worth a look; others should just check out the 1939 version - a fine horror-comedy that made a star out of Bob Hope. (2) 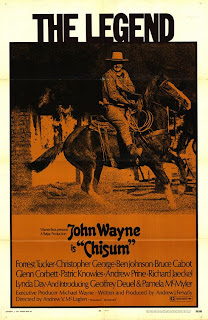 SHORT: John Wayne and Chisum (Elliot Geisinger and Ronald Saland, 1970) – Sycophantic documentary about the making of the film. It’s usually fun seeing scenes shot from different angles – and some behind-the-scenes shorts even show different takes or deleted material – but as the film isn’t very good, it’s not so exciting. (1.5)
Posted by Rick Burin at 22:42