Last year I set out to watch every one of Buster Keaton's shorts from 1918 to 1923 in order, tracing his development as a comedian and filmmaker. That's all well and good, but I couldn't wait to revisit some of his less heralded shorts from 1920 and '21, when he was first branching out on his own with spectacular results. So I watched a load of them all in a row. I'll get back to the project sometime soon. 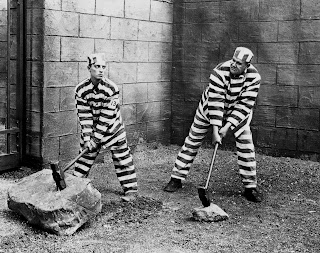 Convict 13 (Buster Keaton and Edward F. Cline, 1920) - Fun but scattershot early Buster short, a distance beneath his first two solo efforts (The 'High' Sign was shot before, but released the following year). He plays a keen golfer who somehow ends up in prison, where he draws the ire of both the guards and a violent inmate (regular foil Big Joe Roberts) - and is all set to be hanged, until his girl switches the rope for a bungee cord. The volume and quality of the gags is impressive - potting a golf ball, spanking a fish, popping up and down through a gallows' trapdoor - and the thick vein of black, fatalistic humour running through the film is a joy to behold (he did that sort of thing so well), though by Buster's standards the stunts are merely agreeable, rather than amazing, and the story's a bit daft. (3) 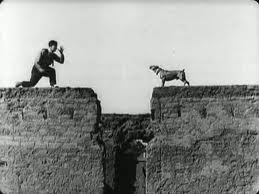 The Scarecrow (Buster Keaton and Edward F. Cline, 1920) - The first half is a tidy gadget-fest, with Buster and Big Joe aided by a multitude of household inventions, like a multitude of condiments hanging from the ceiling, and a bath that turns into a piano. The second has them fighting over a girl (the bit where Buster trips up Joe and stands on his head is hilarious), and our hero doing a sublime impression of a scarecrow... but - and I don't want to tell Buster how to do his job, as he was rather good at it - at the moment you think it's about to build properly on the groundwork of the opening reel and utilise the gadgets in new, unexpected and hysterical ways, it loses its enthusiasm for the idea, and goes off elsewhere. A shame, as the bit where Buster makes his folding bed and hides in it, whilst being chased through the house by Luke the Dog, is one of the greatest sight gags of his career. And the last half-minute is lovely. (3) 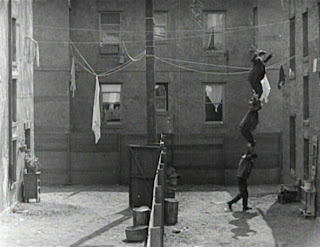 Neighbors (Buster Keaton and Edward F. Cline, 1921) - This was the first Buster short I saw and it's a little gem, with a backyard finale you'll never forget. His attempts to marry next-door neighbour Virginia Fox lead to a violent familial feud, his trousers falling down (cue a brilliant chastity gag) and the express need to run from one tenement building to the next in a three-storey 'human tower'. There are a couple of regrettable blackface gags (they're not mean-spirited, but they do make you wince) and some of the bits in the middle don't work, but it's worth it for the eye-popping stuntwork, and a portrait of a genius coming to terms with his talent. (3.5) 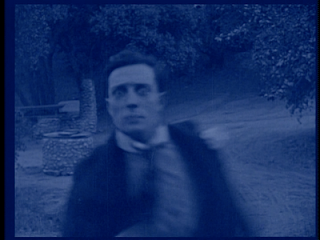 The Haunted House (Buster Keaton and Edward F. Cline, 1921) - The first half has Buster getting a lot of glue on things (after a typically brilliant opening salvo), the second has him legging it around a supposedly haunted house. To be honest, that joke with the timelock and his clothes doesn't really make sense - as if the master of stuntery wouldn't wriggle out of that one - but not to worry, there are a couple of things here that are truly remarkable. Exhibit A is Buster's delightful puncturing of the fourth wall: running full pelt from the law, he cranes his head into the camera as it passes, giving it a wide-eyed, madcap, Johnny Rotten-ish stare. Exhibit B is the "slide down to Hell" and our hero's reaction as the Devil marks his arrival, before setting his bottom on fire. The material's a touch spotty compared to Buster's greatest shorts, but as usual it's enlivened by some remarkable stuntwork. There is also a bit where the front of a house falls on someone, but they're not stood in the doorway, so they just get squashed. Luckily it's only a theatre set. (3) 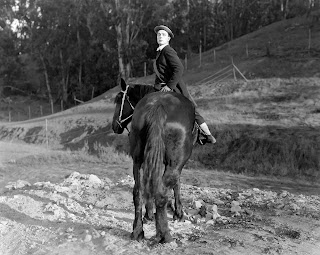 Hard Luck (Buster Keaton and Edward F. Cline, 1921) - Buster's great lost film, then his great incomplete film and now one of his blackest, funniest, oddest films once more, with the biggest laugh of his career* reinstated at the finish. He plays a spin on Chaplin's Little Tramp: a beaten-down little guy whose attempts to make a buck fail dismally - so he tries to take his own life. Those sequences are clever, but they're also too sad - and possibly in too poor taste - to actually be funny, even if his attempts to hang himself do lead to a brilliant verbal gag later on. Having failed twice to end it all, Buster opts for poison, but instead gets hammered on whisky and ends up leading an armadillo hunt (which he searches for in the sea), befriending several members of the aristocracy (one of whom rather resembles Lady Mary Crawley), being followed by a bear and having a fight with some robbers - utilising that old "fake gunfire" joke of which he was so fond. There's no rhyme or reason behind most of Hard Luck, aside from a rough theme about the redemptive power of booze, but it has a succession of massive laughs in its final two-thirds and much of the stuntwork is just gobsmacking. (3.5)
*Objectively. He recalled patrons still laughing at it as they walked out of the theatre. 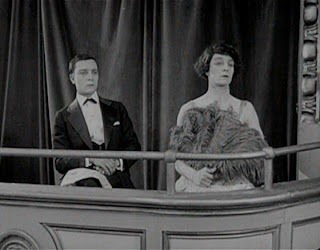 The Play House (Buster Keaton, 1921) is best-known for its revolutionary opening, featuring no fewer than 25 Busters appearing in – and attending – an opera house variety show. It's an ingenious sequence, though it's not actually that funny, the big laughs arriving later on as he hacks off a man's burning beard with a fire hose, labels his wife (a twin) with a big felt tip and pretends to be a monkey. (3) 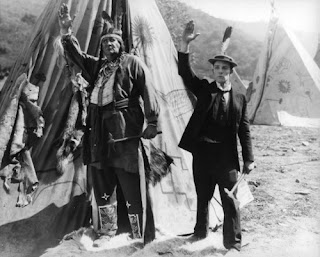 The Paleface (Buster Keaton, 1922) was way ahead of its time, pre-dating Redskin by eight years and Broken Arrow by 28 in its portrayal of Native Americans brutalised by white invaders. Buster's the title character, of course, who wanders into a dispute between natives and dodgy oil barons, and spends the next 20 minutes trying not to get killed. It's pretty rough-and-ready by his standards, but the burning-at-the-stake scenes are funny, the chase sequences are largely successful – with one of them appearing to prefigure the majesty of Seven Chances – and the climactic "two years later” gag is a gem. A note regarding safety: encasing yourself in asbestos is not generally considered a good idea anymore. (3) 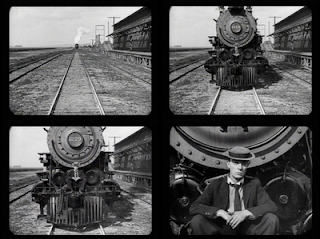 The Goat (Buster Keaton and Malcolm St. Clair, 1921) is about as good as movies get – just pure joy. Buster's a luckless tramp who has to use every ounce of his cunning and athleticism to stay one step ahead of the law, after flinging a lucky horseshoe at a policeman's head and then being mistaken for a hardened criminal. One of Buster's few pure chase pictures, it was co-helmed with former Keystone Cops director St. Clair and features two of the best sight gags of his career: his arrival on a train and his exit from a dinner party. (4)

... and I also watched this next short, an experimental affair made the year before Buster's death: 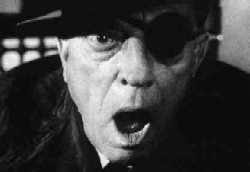 Film (Alan Schneider, 1965) – Eerie, barely successful attempt to transfer Samuel Beckett's genius to the screen, as an old man (Buster Keaton) is menaced by his own terror of observation. The joke with the cats is good, the sequence in which he strokes and then destroys a cherished photograph brings a lump to the throat, and the ending is worth hanging around for… but Beckett seems to have little understanding of the medium and the whole thing feels a lot longer than its 17-and-a-half minutes. (2.5)
Posted by Rick Burin at 20:04