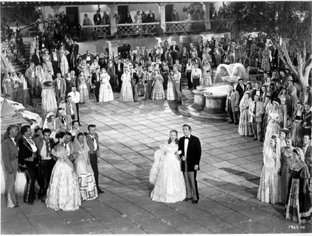 Can't Help Singing (Frank Ryan, 1944) - Deanna Durbin was the Canadian opera star who saved Universal Studios (the dream factory, not the tourist attraction). Beginning as a 14-year-old in 1936's Three Smart Girls, she made 21 tuneful, attractive musicals that charmed America, and provided Winston Churchill with his favourite film, 100 Men and a Girl. Can't Help Singing is notable for a few reasons. It was Durbin's only colour vehicle, the only one with an Old West setting and the only one with songs by Jerome Kern, the tunesmith who wrote the score to Swing Time, was immortalised in the spotty 1946 biopic Till the Clouds Roll By (£3 at a shop near you) and was once discovered by '30s star Myrna Loy sitting on her porch, trapped in a glass jar.

Durbin plays a flighty senator's daughter who heads out West after her caddish lover (David Bruce, whose character is abominably underdeveloped) but finds herself falling for travelling companion Robert Paige. Akim Tamiroff and Leonid Kinskey (Sascha in Casablanca) are a pair of feckless tramps also along for the ride, while Ray Collins (Gettys in Citizen Kane) is Durbin's father. The set-up, borrowed from the Capra/Riskin classic It Happened One Night, is solid, but the narrative moves too quickly, with a dearth of scenes charting the growing relationship between Durbin and Paige. The unfailingly charming leads do their best, despite Deanna having been made-up to within an inch of her life - boasting blusher that seems to be causing her near-constant embarassment. It's a shame the script isn't stronger, as the songs are gloriously performed with the big budget allowing them to be extravagantly, imaginatively staged.

Durbin and Paige's duet to Can't Help Singing is a tremendous addition to the singin' in the bathtub tradition (think Winnie Lightner in The Show of Shows, Lena Horne in that legendary deleted scene from Cabin in the Sky, or me the other day, crooning Tom Waits as I washed my feet), with Californ-i-ay a superior precursor to Oklahoma!'s title tune and Any Moment Now really rather touching. One could argue that Elbow Room - performed by a knockabout chorus - is the most dispensable entry in the canon of 20th century song, but More and More more than makes up for it. Can't Help Singing doesn't rank with the best of the Durbin films, but it's good fun, with a slew of musical highlights making up for the slightly hurried plotting. (3) 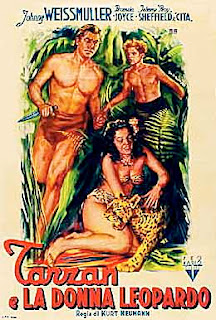 Tarzan and the Leopard Woman (Kurt Neumann, 1946) - This is a touch better than Amazons (see Reviews #1), with plenty of action (quite well done) and a lively performance by Weissmuller, who'd looked a bit out of sorts in the previous entry. The plot, by now following a path through the jungle wilds so well-trodden it resembles a motorway, sees the Ape Man battling a weird cult with silly leopard costumes that's really into robbery and human sacrifice. Considering the movies were aimed at kids, their marketing is curiously sexualised, with the poster art invariably flagging up the tits of whichever minor character was most well-endowed. Here it's Acquanetta, who gets shared billing. Her leopard bikini is at least a bit better thought-out than those ridiculous capes the other cult members are wearing.

I rather enjoyed the film, particularly its adherence to near wall-to-wall action, but it provides quite a bit of unintentional hilarity. That comes partly from its incredibly low opinion of natives (who are all duplicitous, hateful bastards) and partly from the barely-choreographed dance the leopard men do around the fire. They look like drunk clubbers wearing their wives' coats. One interesting element of the film is "half-native" Edgar Barrier, a Western-educated cultist who denounces the decadence of the imperialists and leads the fight against them. All the RKO series regulars return here: Brenda Joyce is still somewhat one-note as Jane, Boy is entering puberty (giving him an all-new voice and face) and Cheeta hogs the limelight once more. I'm going to be an old cynic and suggest that it's not really him playing that music on the trumpet, though. (2)
Posted by Rick Burin at 14:34