The Wrestler, the Talmadges, and Troy and Abed in the morning - Reviews #101

A film, a short and a TV series, because I am lovely. 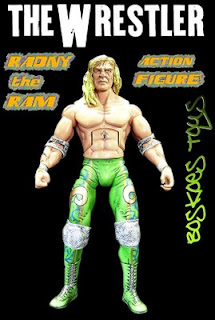 The Wrestler (Darren Aronofsky, 2008) reminded me a little of Anvil, in its portrait of likeable, long-haired '80s relics playing to passionate but dwindling audiences. It's a heavy-handed, obvious but well-acted study of ageing pro-wrestler Mickey Rourke, who tries to connect with a lap dancer (Marisa Tomei) and his daughter (Evan Rachel Wood) after a stark reminder of his mortality. Aronofsky seems to have little faith in his audience's ability to understand even the simplest analogies, initially hinting at the fact that Rourke and Tomei are both past-it pieces of meat before deciding to clobber us over the head with it, and soundtracking our hero's walk to a new job at the deli with crowd noises - as if the way it's filmed doesn't make the connection obvious enough. OH RIGHT DARREN THANK YOU FOR EXPLAINING IT. I also suspect that if Aronofsky could direct an entire film as a tracking shot from just behind someone's head then he definitely would. The story is engrossing, building in power as it progresses, though the dialogue is variable and the self-satisfied gags about in-the-ring villains being absolutely lovely off-stage wear thin after a while. Rourke's performance is good rather than great, aside from the scene by the water, which is superb in every way and presumably what got him the Oscar nom. That and his leathery skin. Tomei, also nominated, was arguably more interesting when she was a sensitive mainstream lead* rather than a challenging, perma-naked wreck-specialist, but she does a decent job with a cliched part. I'm not sure about Wood's performance: she was excellent at the start, but by the end she was just shouting her trite dialogue whilst staring at the floor. I don't think this is the masterpiece others do, though it's still worth seeing, if only for that superlative monologue: "You're my girl. You're my little girl. And now, I'm an old broken down piece of meat... and I'm alone. And I deserve to be all alone. I just don't want you to hate me." The Nintendo game was also cool. The Wrestler was remade by Aronofsky in 2010 as Black Swan. (3)

See also: Marisa Tomei also appeared in Only You, doing her sweet-girl-abroad routine, and Before the Devil Knows You're Dead, not.

*This not apply to her performance in My Cousin Vinny. 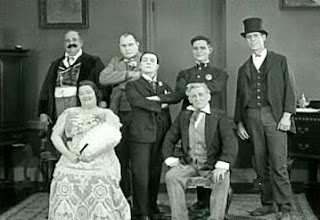 SHORT: My Wife's Relations (Buster Keaton, 1922) - One of Buster's most underrated films, with a great through-line, several hysterically funny little set-pieces and a performance by its star that is essentially a series of priceless reaction shots. Accidentally married to a hefty woman with a massive dad and three big brothers, our hero navigates a family meal, a night's sleep, a photo-shoot and a posh party, displaying an impressive mix of patience, persistence and almost perpetual confusion. It's modest, with just a brief burst of dazzling stuntwork at the close (the 'carpet roll' is incredible), but the standard of throwaway gags is absolutely extraordinary, elevated by perhaps the cleverest, subtlest performance of the star's pre-features career. There's the bit where he pours the coffee into the sugar bowl to (sarcastically?) impress an in-law, the sequence with the collapsing bed and the indescribably brilliant moment in which everyone droops to the floor in unison with the photographer's slumping tripod. And how Buster can transmit such a variety of emotion whilst essentially keeping a Stoneface I don't know. The star's marital difficulties with Norma Talmadge do seem to have affected the way he portrayed love on-screen - and that's before we even get onto the subject of her relations - but where the subject matter is less tender, the films do tend to be irreverent and sardonic, rather than bleak or cynical. This one's a minor classic. (3.5)

See also: Many of Buster's other great early solo shorts are reviewed here. 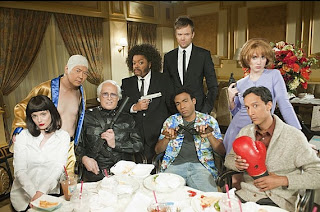 "WANTED - GAY AND ALIVE"
TV: Community (Season 2, 2010-11) is alternately better and lesser than the first series, with a few sincere scenes that are its finest moments to date, but far more genre episodes; pastiches in the Spaced mould. Though fine in themselves, they're not really what Community used to be about. There's a great ensemble - even if Jeff, Pierce, Annie, Troy and Abed are significantly funnier and more interesting than Shirley, Britta and the one-note Chang - and barely an episode goes by without three or four massive laughs and a dozen smaller ones. The weakest episode is probably #22, set around an anthropology exam. The best is #10, with Troy's 21st birthday party: the scene at the end with him and Annie is wonderful. Overall, it's probably a shade below the debut season, but it's still a real treat. (4)
Posted by Rick Burin at 07:13