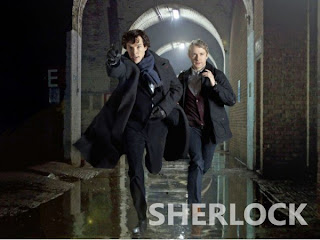 I dug out the DVD and wrote short-and-therefore-essentially-pointless recaps of the opening three episodes, and the one the BBC threw in the bin. Since I'd done that, I thought I may as well put them up here. To be honest, I'm not adding much to the world with this one, though there are *SPOILERS* throughout. If you're in the mood for other insultingly brief pieces about the programme, my original four-sentence review was here, the first episode of the second series got a brief mention here and there was a slightly lengthier and more worthwhile summary of the whole season here. 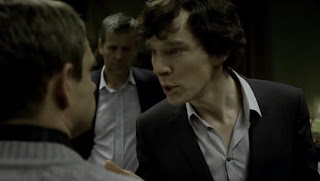 A Study in Pink (3.5) - I still don't think the encounter with the culprit quite works, but everything else about this open is utterly extraordinary. It's astonishingly sure-footed, with virtuosic performances from Cumberbatch and Freeman, scintillating dialogue and the kind of slick direction that's at once modern and timeless. The Blind Banker (2.5) is the weakest episode of the six so far (though Steve Thompson also penned the best of the bunch), with a convoluted, shapeless story about Chinese treasures, and uninteresting supporting characters. The interactions between Holmes and Watson are at least familiarly fine, and the Watson-is-Holmes bit is funny. The Great Game (3.5) is an excellent climax to the first series, with Sherlock (Benedict Cumberbum) delighting in being tormented by an unseen psychopath. I'd forgotten how dark, awkward and tricksy this Mark Gatiss-scripted episode was - even if its excursions into horror are a touch tiresome - with an eerie gimmick that sees Moriarty's goading words panted by sobbing civilians, and a deliciously amoral Holmes. It makes the moment where he finally mellows ("Thank you for what you did then, that was... good") all the more satisfying. But the best bit is still Andrew Scott's eyes flashing as he spits: "I will burn you... I will burn the heart out of you." Cripes. He nearly did, as well. 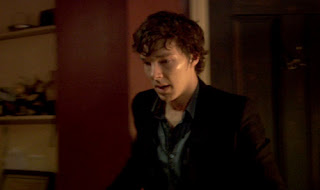 I chose this picture because it looked a bit red. That's about all it has going for it.

This embryonic, one-hour version of A Study in Pink cost a reported £800,000, but was ditched by the BBC upon completion - and thank goodness for that. Its pacing is probably slicker (presumably that's what happens when you're forced to throw in an extra half hour of material) and the most jarring element of the finished film is missing - how does Sherlock miss the fact that it's the taxi driver first time around? - but the direction, performances and sections of the script stepped up another level before the series reached our screens. Moffat added creepy footage of the shaking, bawling victims, an excellent subplot featuring Mycroft, that superlative gimmick of on-screen writing and the odd great one-liner ("Look, I've got a blanket"), while the music got a welcome upgrade and the reddish, scrappy visuals of this first effort were replaced by a shimmering, icy blue palette that underlined its hero's otherworldliness. Sherlock's reasons for getting into the car with the culprit also changed, from a hypo in the arm to a desperate need to understand how toothy serial killer Phil Davis got his passengers to poison themselves. And his flat looked nicer. Also, Sergeant Donovan was replaced by a better actor. Kudos to the head honchos at the BBC for demanding a re-tooling of the project - I bet it took balls, I know it drew flak from the right-wing tabloids, but it also gave us the greatest argument for retaining the licence fee that I've come across in years*. (3)

*To be honest, I would happily pay the licence fee just for the advert-free football commentary on the radio, I just put this bit in as a pithy sign-off.

Sorry, I have got a bit obsessed with Sherlock.
Posted by Rick Burin at 21:04