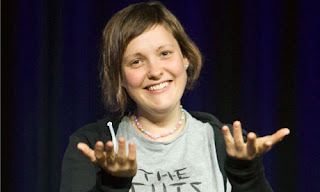 A FEW minutes late, sporting her winter look of "Norwegian boy", and "weighing in at between 10 and 12-and-a-half stone depending on how lonely she is", Josie Long bounds into the Studio Theatre.

"I’ve had one hell of a day," she says, offering some traffic-themed apologies and a handful of gags before introducing support act Brigitte Aphrodite.

This singer and poet, clad all in black and boasting a massive personality, treats us to witty, ribald ruminations on the dearth of things to do in Bromley, Kent, drinking herself awake and partaking in sexual congress with a zombie.

Then, after an interval, it’s time for the show proper - and it’s worth waiting for: an endlessly inventive mixture of satire and silliness that juxtaposes the left-field observations of Long’s early act with spiky, impassioned political material that - most importantly - is also wickedly funny.

She adopts a whiny, pleading voice to bemoan the actions of the Conservatives. "They hate the libraries - how can you hate the libraries?" she asks. "Why do they keep trying to sell the forests? You can’t privatise children’s wheelchairs, that’s like what a Bond villain would do."

"I feel like they got together and said: 'Why don’t we set up a 1980s tribute government, I’ve got all the gear’," she adds.

She does a superb routine about what she should have said to a Lib Dem spin doctor on BBC1 programme This Week, and reveals an insecurity about her lack of political knowledge, saying that if she had taken up offers to go on Question Time she would ultimately have broken down wailing: "I’m out of my depth, I’m just a clown."

Her stock of brilliant one-liners includes topical material, like her explanation for Michael Gove’s suggestion that we buy a new royal yacht for the diamond jubilee: "If we give a big enough sacrifice to the Queen, she will ensure a good harvest."

Long’s routines are peppered with four-letter words, but as she cheerily observes: "I have a big, chubby face like a baby, so it doesn’t count. If a baby swears, you’re just glad it spoke."

Her show builds to an impassioned call to activism that invokes the Black Panthers, UK Uncut and Stanley Baldwin - the Conservative Prime Minister who gave a fifth of his wealth to the nation - with Long cheerily concluding: "I think you should go back to where you live and join the EDL", before stressing that this is very much a joke.

Despite the colourful language and left-wing politics, the Harrogate audience only seems uneasy when she claims Ringo Starr was "by far the best-looking of the Beatles", prompting a cry of "No!" from one outraged woman.

The comic does at least acknowledge that Ringo was responsible for "ruining Beatles albums by putting children’s songs in the middle of them."

For the most part, though, this extraordinarily gifted stand-up sticks to political ground.

Affable, accomplished and razor-sharp, her shift into satire has elevated her work to a whole new level.

AFTER the show, I bothered Josie and asked her to say some stuff about Harrogate. She did.

“Last year, after the show, me and my friend Johnny (a former St John Fisher pupil) went for a massive long walk all through Harrogate and it was so beautiful. You live in a beautiful place and the people are very generous and didn’t hold it against me even though I was late.”

Labels: Brigitte Aphrodite, Harrogate Advertiser, Harrogate Theatre, Josie Long, Norwegian boy, partaking in sexual congress with a zombie, ribald ruminations on the dearth of things to do in Bromley, satire