I met Ken Russell once. For about 15 seconds. In that time he signed a piece of card and a friend's book, working out at a cool 7.5 seconds a signature. He was gruff but friendly and had a big red face. 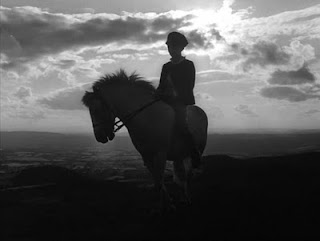 Russell - who took Billy Wilder's first commandment of moviemaking ("thou shalt not bore") to extremes - made his name with rapturously-received arts documentaries for the BBC. Among the most acclaimed was TVM: Elgar: Portrait of a Composer (Ken Russell, 1962, 3) is one of Russell's famed docu-dramas for the BBC. Seen today, it's a fairly effective biography, with several very potent passages - especially the WWI footage cut to Land of Hope and Glory - but a stiff, strangely-written third-person narration that leaps from one event to another, often makes no sense (the "turning point" in Elgar's life turns out to be nothing of the sort) and undermines its sense of authority by inexplicably inserting the word "apparently" at regular intervals. Still, the monochrome photography is ravishing and the use of music is suitably thrilling. Particularly Elgar's exquisite cello concerto, which makes me cry. 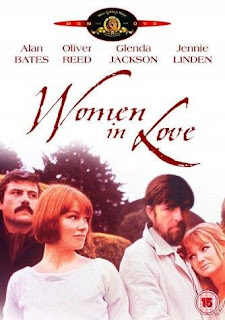 His great success was Women in Love (Ken Russell, 1969, 3), for which Glenda Jackson won the 1969 Best Actess Oscar. It's a messy but magnificently-acted adaptation of the D.H. Lawrence novel, with Alan Bates as a bearded, gabbling amateur philosopher obsessed with manly love, Jennie Linden his clingy beau, Oliver Reed his best friend - rocking a fearsome moustache and permanent 10-yard stare - and Glenda Jackson as Reed's spiky, free-spirited bit of posh. Bates and Jackson are astonishingly good, Reed and Linden a touch below, with Eleanor Bron (of Bedazzled and BT recorded messages renown) suitably annoying in support. The script isn't always quite on-the-money, Vladek Sheybal seems oddly cast, but it's always interesting - I liked the stylistic shifts underscoring the film's changing moods - and packs a latent emotional thwack. 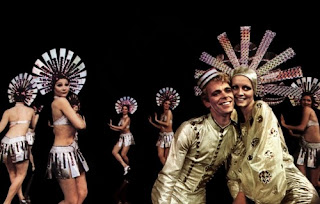 After the notorious 1971 movie, The Devils - cited by Mark Kermode and Alex Cox as a masterpiece, but pilloried by many and now long out of circulation (a DVD is imminent) - he opted for a change of tack, and made a backstage musical, The Boy Friend (Ken Russell, 1972, 4). It's an inspired melange of The Entertainer and 42nd Street, as a seedy seaside revue is visited by a Hollywood producer, and all concerned indulge in Busby Berkeley fantasies. Twiggy is excellent in the lead – playing an ingénue who takes over when the star (Glenda Jackson in a delicious extended cameo) breaks her ankle – and there are several spectacular songs and production numbers, amidst the campy backstage squabbling and Barbara Windsor’s boob-jiggling and caterwauling. With Bugsy Malone and All That Jazz, Russell’s typically extravagant, confrontational musical is one of the most striking and original of its decade. It's also the best film I've seen so far this year. 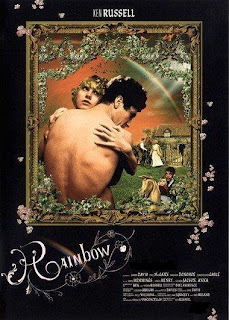 Even great directors get it wrong, though, and as with Orson Welles's The Stranger, proving you're a safe pair of hands with your backers' money often results in a dull film. Such was the case with The Rainbow (Ken Russell, 1989, 2) a pervy tedious prequel to Women in Love, about the sexual awakening of a school leaver (Sammi Davis; though not, alas, Sammy Davis, Jr.). It's well-directed, with some stunning cuts, and there's a wonderful score by the great Carl Davis, but the story just isn't very interesting. Davis's mannered, slightly wooden performance does grow on you. Glenda Jackson appears as the mother of her character in Women in Love, but has almost nothing to do.

Russell passed away in November, 20 years after his last major film, the nattily-titled Whore.
Posted by Rick Burin at 18:42