This is probably the most personal review I've ever put on here. Uh-oh. 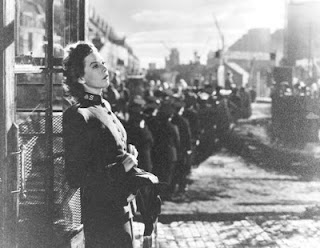 "Drunkenness and murder! My God: why hast thou forsaken me?"
*SPOILERS*
Major Barbara (Gabriel Pascal, 1941) - There are some performances that bypass your critical faculties altogether, connecting not with your brain but with your soul. They are desperately few, those characterisations of such heightened sensitivity, such emotional resonance that the effect is both exalting and suffocating. You might chance upon one every three of four years, if you're lucky. I don't know why, or how, but every time Wendy Hiller utters a line or holds the frame in Major Barbara, I am on the verge of tears. It's just such a beautiful, enrapturing performance, the perfect, compassionate, warm and beating heart of a satirical, often cynical Bernard Shaw gabfest that cocks a snook at temperance, the Sally Army and those who see nobility in poverty. The first time round, I found it difficult to grasp the polemic beyond Shaw's bombast - and his alter-ego's bomb blasts. On a second viewing, it's much clearer: poverty is the real enemy; don't bother thinking about the soul until you've saved the body.

Hiller is the title figure, whose faith in the noble work of her Salvation Army is shattered when her bosses accept a donation from her father, a supercilious, devilish, ominously-twinkling arms dealer (Robert Morley) who looks and acts like a mix of Shaw and Satan. Hiller has entranced professor Rex Harrison in a spellbinding prologue added especially for the film - I'd have the audio of either that speech or the climactic one in my eight Desert Island Discs - and destroyed loutish Robert Newton through softly-spoken rectitude, but has her life torn asunder by the compromise of all she holds dear, before rising again, eyes shining, voice lifting as she enters a brave new world. "Transfigured", as Shaw intended. Much is made by acting buffs of Hiller's supposed staginess in her early films. They say she's stiff, overly technical, soon to be overtaken by a more naturalistic mode of performance. What a load of shit. Great acting isn't what you see, it's what you feel, and Hiller's characterisation - through whatever method - cuts right to the bone.

Shaw's wise, profound, wilfully contrarian (though somewhat abridged) script is all kinds of magic, even if very occasionally - as with another fine Irish playwright, Oscar Wilde - you want to slap him in the face and shout: "I knew you were going to fashion an epigram by reversing the previous line, now stop being so fucking pleased with yourself!" Perhaps that's just a personal thing. Helping out Gabriel Pascal, who also helmed the Shaw/Hiller collaboration Pygmalion, are assistant director David Lean, cinematographer Ronald Neame (who made Tunes of Glory), production designer Vincent Korda, and Cecil Beaton, sorting out the costumes. Cast-wise, Morley is terrific in a big, broad part, while Rex Harrison is at his most looking-like-a-dog-ish in a curious role that's neither one thing or another. It's a solid performance, reaching an admirable crescendo at Morley's factory, but lacking the potency or white hot comic smarts of Pygmalion lead Leslie Howard. The supporting cast is largely superb, particularly Marie Lohr as the self-pitying aristo married to Morley, Walter Hudd - hysterical as their feeble, pompous son - and David Tree being inappropriate at all the best times. Deborah Kerr is touching in her first film (she later shared the screen with Hiller in the brilliant Separate Tables), while Newton is dynamic and compelling - if perhaps a little over-ripe - as the rotten apple hurling himself at the Sally Army.

It's Hiller's film, though, an extraordinary showcase for a rare and remarkable talent, her greatest creation a living, breathing, wonderful woman of Shavian rhetorical powers, uplifting faith and arresting, all-consuming empathy. "Oh, did you think my courage would never come back?" she asks Harrison in a transcendent closing monologue. "Did you believe that I was a deserter? That I, who have stood in the streets, and taken my people to my heart, and talked of the holiest and greatest things with them, could ever turn back and chatter foolishly to fashionable people about nothing in a drawing room?" It absolutely floors me. (4)

See also: I had Hiller's turn at #2 in my best female performances list - I'm starting to think I might have underrated it.
Posted by Rick Burin at 21:42