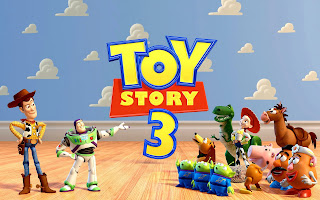 *SOME SPOILERS*
CINEMA: Toy Story 3 (Lee Unkrich, 2010) is perhaps the best of the series - and that's saying something. Andy is now 17, and heading for college. Clearing out his room, he earmarks cherished childhood toy Woody (voiced by Tom Hanks) as a travelling companion, but consigns the rest of the gang to the attic, foolishly stashing them in a bin bag. One hair-raising encounter with a refuse lorry later and Buzz, Rex, Hamm, Mr Potato Head and the others decide they've had enough - turning themselves in to the nearest playgroup. There, they deal with obstacles both physical (terrifying toddlers, a psychotic bear) and intangible (love, mortality, the transience of being), as existential ruminations jostle for space with brilliant jokes and wildly-imaginative chase sequences. Benefiting from the leaps in digital animation over the past 12 years, this richly rewarding film adds further depth to this fully-realised world - not least in its subtle, sure-footed use of 3D - while the terrific scripting taps into both the mythology and the absurdity of toys. It's there from the spellbinding, ridiculous opening sequence, set in Monument Valley, to the masterfully-conceived running gag that sees Buzz (Tim Allen) turn Spanish - not the tired non-sequitur you'd get from any other studio, but an inspired riff on the peculiarity of mass-market electronics. That intelligence and invention is underscored by an effortless humanism that informs the whole piece, bursting through the surface during the terrifying landfill set-piece and the ending, which is just sublime. One could legitimately quibble with the excessive repetition in the earlier parts of the script or argue that the new characters can't quite match up to the returning favourites, but it really does feel like splitting hairs. This is a massively ambitious, remarkably successful third outing: mature, invigorating and deeply, deeply moving. (4)

For reviews of Toy Story and Toy Story 2, please click here. For write-ups of WALL-E, Ratatouille, Cars, Finding Nemo and a selection of Pixar shorts, just click on the name. Reviews of other Pixar shorts are dotted about the site - for our full list of contents go here. 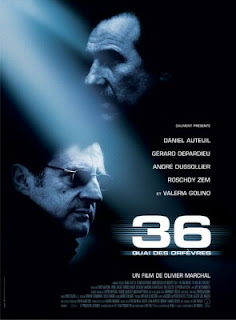 36 Quai des Orfevres (Oliver Marchal, 2004), named after the police headquarters in Paris, is an entertaining but flawed thriller, loosely based on real events. Jean de Florette co-stars Daniel Auteuil and Gerard Depardieu play rival officers - and former friends - striving to bring in a gang of ruthless bank robbers. It is a case that will define their careers and change their lives forever: one for better, one for worse. The characters, that is, not the actors. Former cop Marchal is good on the day-to-day details, but his forays into fiction are largely unsuccessful, striving for epic tragedy and finding only melodrama. The dovetailing of twin narratives, in the vein of Murder, My Sweet or Le Doulos (referenced overtly in the character of the informer Silien), is similarly disappointing, creating a resolution that's too pat, smug and downright predictable to satisfy. This has been described as the French Heat (it's about cops and robbers, it has two famous stars) and while it's not as infuriatingly self-important as that damp squib, its shortcomings are all too apparent. Auteuil's performance, the glossy cinematography and the fast pace are the main draws. (2.5)
Posted by Rick Burin at 14:21