When Hess came to Scotland

Something a little different now: a feature about Rudolf Hess' ill-fated 1941 'peace mission' to Scotland, based on an interview with the soldier who guarded him. 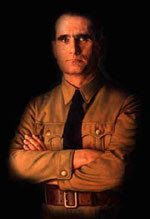 With its cast of Glaswegian farmers, duplicitous dukes and one high-ranking Nazi, Rudolf Hess’s disastrous solo flight to Scotland remains one of the most extraordinary episodes of the 20th century.

Schoolteacher Ian Bailey was the only man to stand guard over the fallen statesman the night he parachuted into farmland near Glasgow.

Hess was appointed the Deputy Fuhrer of Nazi Germany in 1933. He had known Hitler since May 1920 and was his closest confidante, having edited Mein Kampf from his cell in Landsberg prison after being jailed for his part in the Munich Putsch. Despite becoming alienated from senior figures in the party during the first years of the Second World War, Hess retained Hitler's ear and was an influential player in the Third Reich.

On May 10th 1941, Hess fell out of the sky into a Glasgow field. How he got there - and what happened next – remains shrouded in controversy. Claiming to represent Nazi Germany, Hess – calling himself “Alfred Horn” – asked to see the Duke of Hamilton, who lived about 10 miles away. He had got close to his target, the Duke's estate, then bailed out of his plane as it spiralled out of control.

Germany was on the brink of war with Russia. Hess hoped to negotiate a peace settlement with Britain that would ally the two nations against the communist state. The wreckage of Hess's planeBut historians remain divided over whether Hess’s mission had been sanctioned by Hitler and whether senior British aristocrats including the Duke of Hamilton had invited Hess for talks.

Even the nature of Hess’s initial detainment is unclear. Some sources say he was captured by soldiers on patrol, others that a lone farmer with a pitchfork performed a citizen’s arrest. Soldiers from the Highland Light Infantry were quickly onto the scene, taking Hess – whose identity was to remain undiscovered for 36 hours – to the Maryhill barracks.

“There was a Corporal,” the 92-year-old schoolteacher said, “but I put him in the corridor – I was looking after Hess!” And so unfolded the incredible story of how the mild-mannered young teacher came face-to-face with one of the most reviled and feared figures in modern history.

“On May 10th 1941 I was the orderly officer for the day," he said. "I went to bed at midnight. At about half past one in the morning the Duty Officer came up to my room and said, ‘A German prisoner’s been brought in – get up!'. ‘Oh,’ I thought, ‘Hell.’ So I had to get up and get dressed again; and then I went into the barracks. It was a moonlit night, and there was a man with his arms around the necks of two of our soldiers, limping.

“When I hoved into sight, one of the soldiers left him, and the fella put his arm around my neck – little did I realise whose arm it was. “Well, a Corporal was laid on as well and we took this chap up to this room and watched him get undressed, and he had very nice long johns on, I remember – very nice clean long johns.

“Then he got into bed and I put the Corporal in the corridor outside with his rifle and fifty rounds of ammunition, and I sat down in an armchair beside his bedside. But he didn’t go to sleep, he put his hands behind his head, and just gazed into the distance and I really felt quite sorry for him.

“On Monday evening, in the mess, when I went in for dinner that evening, there was a bit of a buzz that that German who’d been brought in on the Saturday night was no ordinary German, and then on Tuesday morning in all the headlines in the papers: ‘HESS LANDS IN GLASGOW!’

“I thought, ‘Of course it was Hess' – but you didn’t expect to see Hitler’s Number Two in the barracks in Glasgow!"

Upon learning of Hess's arrest, Hitler issued a statement saying Hess was mentally ill, suffered from hallucinations and had acted of his own accord.

Ian bequeathed his life-savings to the school where he had taught, and attended as a boy. For more on that story and his life, click here.
Posted by Rick Burin at 13:37