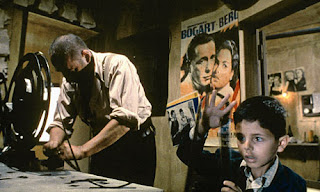 *MASSIVE SPOILERS*
Cinema Paradiso: Director's Cut (Giusseppe Tornatore, 1988/2002) is longer, bleaker and more troubling than the uplifting 'international version', which scooped countless awards (including the Oscar for Best Foreign Film) and won the hearts of the world. The set-up is the same, with silver-haired moviemaker Salvatore (the excellent Jacques Perrin) looking back on his childhood and adolescence - most of it spent at the local picture palace - following the death of his mentor Alfredo (Philippe Noiret). Sadly, life has afforded no Hollywood ending to the deadened director, who remains haunted by the spectre of lost love, a doomed romance with the middle-class Elena (Agnese Nano). And through it all, Ennio Morricone's sensational score dips and soars.

Rather than a self-indulgent splurge or a cash-in job, as many extended cuts are, this one is the real deal, an expanded take on the original version of the film that toured Italy in 1988. As well as restoring the 31 minutes that were lost in the re-edit, deemed necessary after disastrous box-office receipts, this definitive cut includes an extra 15 minutes of material. So what's new - or rather old? Well, Toto, for one thing. He's old for much longer. In the shortest cut, we get just a handful of scenes showing Perrin as the grown-up Salvatore, still lamenting his betrayal by the only girl he ever loved. Here, there's a full-blown reunion between the former lovers (sadly the older Elena is played by Brigitte Fossey, who's quite poor), along with a stunning, thriller-ish sequence (composed of masterful jump cuts) that reveals the identity of her husband.

Crucially, this release also reveals why the love of Toto's life apparently left without saying goodbye, substantially changing the character of Alfredo from an avuncular, grizzly old duffer to a possibly misguided puppet-master. These are the extra sequences which were bafflingly shown in confusing and meaningless silent snippets over the end credits of the international version! As with that more familiar cut, the best scenes remain those featuring Noiret and the young Toto (Salvatore Cascio), both of whom are just magical, but here they're lent yet greater resonance by the devastating pay-off. In any form, Cinema Paradiso is a richly evocative movie that radiates a love of film and scales some unforgettable heights - the exam set-piece, the outdoor screening, the montage of kisses. This remarkable cut turns much of what you think you know on its head, twisting the film back from a crowd-pleaser to an upsetting, uncompromising artistic statement. See it. (4) 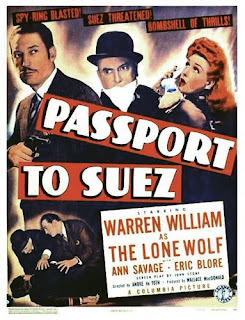 Passport to Suez (Andre de Toth, 1943) - Warren William's final appearance as jewel-thief-turned-crimebuster The Lone Wolf is light on comedy and has almost no mystery. Surprising, then, that it's still a pretty snappy thriller, with our hero (I trust he's your hero too - why wouldn't he be?) getting mixed up with Nazi spies trying to steal secret plans. The Lone Wolf series was a staple of '30s and '40s Hollywood and after a superb, glossy outing with Melvyn Douglas (The Lone Wolf Returns) and a surprisingly sprightly one featuring Francis Lederer (The Lone Wolf in Paris), Pre-Code favourite Warren William took over as solo operator Michael Lanyard. His first appearance was in The Lone Wolf Spy Hunt, a matchlessly enjoyable fusion of thriller and screwball romance, before the series settled into an agreeable if unexceptional groove with movies like The Lone Wolf Meets a Lady and The Lone Wolf Keeps a Date. Those earlier sequels are certainly the best, full of nice interplay between William and his doting valet Eric Blore. By the time studio Columbia began shoving Lanyard into WWII propaganda flicks like Counter-Espionage (so steeped in patriotic fervour it feels slightly bossy) and One Dangerous Night, the entries were looking a touch thin. Which brings us to Passport to Suez. It's unusual to see William's character so out of his depth as he appears for the most part here, trying - and largely failing - to stay one step ahead of the Axis agents. Eric Blore is good value as ever, playing valet Jamieson, though the introduction of his screen son is a little wrong-headed. The support cast is somewhat enlivened by Ann Savage, the femme fatale from the classic PRC no-budget noir Detour, who has an intriguingly strange face/head, if not a great deal to do. (2.5)

For a review of the previous film in the series, One Dangerous Night, please go here. 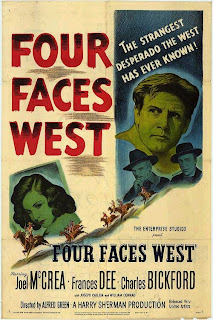 The worst drawing of Joel McCrea the West has ever known.

*SPOILERS*
Four Faces West (Alfred E. Green, 1948) is a genuinely offbeat Western, in that no bullets are fired at any stage, though the gunpowder inside is used to cure two sick border children of diptheria. The film begins as a manhunt, with 'bankrobber' Joel McCrea (he leaves an IOU, but does point a gun at the manager) tracked by sheriff Pat Garrett (Charles Bickford). Then it adds some romance and a touch of history, before taking an inspired left-turn. McCrea's Westerns are a mixed bunch. He was a marvellous actor and from 1946 made nothing but oaters. Odd, then, how few were worthy of his talent. Of the 15 or so I've seen, only Stars in My Crown (is that a Western?), Ride the High Country and Colorado Territory really made the grade. This is definitely above-average, improving as it goes along, with a moving, reflective final 30 that comes out of nowhere. The supporting cast includes McCrea's wife Frances Dee as the love interest, and Maltese actor Joseph Calleia, playing against type as a kind-hearted gambler. This moodily-photographed outing isn't a masterpiece, but it does something different, and that's a welcome change in a genre heavily populated by formula films. (3) 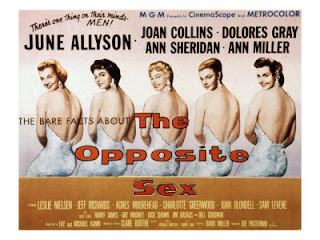 These women look a funny shape. Can't they get some better artists in Hollywood?

The Opposite Sex (David Miller, 1956) is a disappointing remake of The Women that adds colour, songs and men, but somehow loses the essence of the original. Perhaps the plentiful cuts to plot and dialogue were to blame, though the lacklustre direction and unimaginative incorporation of the numbers doesn't help. June Allyson plays Kay, a former chanteuse who finds that her husband (Leslie Nielsen) has strayed with chorus girl Joan Collins. She's cut up about it and heads for Reno, but the chance of reconciliation is always there. Amidst the disappointment, there are some positives. Allyson was an underrated, distinctive actress and she's very good here, well-supported by Sandy Descher (as her daughter), Ann Sheridan - delivering the best performance of the bunch - and the legendary Joan Blondell, whose part is sadly far too small. June also contributes a couple of musical highlights: Young Man With a Horn, complete with trumpet solo by Harry James, and Now Baby Now, with its explosion-in-a-pastel-factory colour scheme. The latter is an exuberant performance, with staging that clearly informed Elvis' Jailhouse Rock (made at MGM the next year), though it inescapably features Allyson in a light blue jumpsuit, somewhat failing to transmit the desired sex appeal. The film's a bit of a damp squib, all told, though worth sticking with if you do start it. The last third is the best. (2)
Posted by Rick Burin at 08:10