How does it feel/To be on your own

The review of Bob at Hop Farm has attracted quite a bit of attention, so I thought I'd tack up the following for you. I'm usually to be found writing about movies rather than music. This review of Scorcese's celebrated Dylan doc has a bit of both; I penned it as part of the old Films on Friday column. 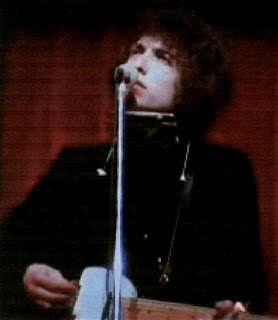 Bob Dylan - wouldn't even show you his right hand. Oh wait, there it is.

Bob Dylan polarises music fans like no other artist. There are those who regard him as the great musical force of the second half of the 20th century - a poet, a pioneer, a genius. And then there are those who say he's overrated; his lyrics are pretentious, his voice is nasal. "Wrong", we call them.

No Direction Home is a portrait of the artist as a young man: described variously as "a sponge", "a shaman" and - yes - "a genius". Focusing on the period 1961-66 (with a little flashing back to his childhood), the three-and-a-half hour film presents his transformation from hero to outcast, as he defined, then rejected, the socially-conscious "folk revival" scene of the period.

The first thing to say is that the concert footage is spectacular. There are various outtakes from the notorious Eat the Document - a 1966 documentary shot by D.A. Pennebaker and never really finished by would-be editor Dylan (though bootleg copies exist), alongside rare material from civil rights events of 1963 and his three, explosive sets at the Newport Folk Festival, culminating with his going electric in '65. Best of all is (incomplete) film of the concert at Manchester's Free Trade Hall in which Dylan responded to cries of "Judas" with a blistering, snarling take on Like a Rolling Stone that remains one of the most extraordinary things I've ever heard.

There's great music from a selection of key influences too, including Odetta's Water Boy and an immensely moving version of If I Had a Hammer, in which Pete Seeger's voice is drowned out by his audience of black workers, singing along.

Then there are the interviews, with contributors ranging from Greenwich Village folkies to beat poets and journalists. Allen Ginsberg offers an appraisal rooted in free association, saying that Dylan had become "a column of air" by 1966, everything concentrated on his breath - and the words pouring out of him. Joan Baez is likeable and self-effacing, while Dave Von Ronk - a key influence on Dylan in 1961 New York - is affable and thoughtful, whilst possessing the greatest laugh in the world. Bob Johnston, who produced Highway 61 Revisited and Blonde on Blonde is a sweary, bear-like man who proclaims, guffawing: "I think that God instead of touching (Dylan) on the shoulder, he kicked him in the ass."

Interviews with Dylan, conducted in 2000 by his manager, Jeff Rosen, are used throughout the film. On first watch I found his contributions somewhat unilluminating, but on second watch - and having read 'Chronicles' - they seem revealing and honest. That's more than you could say for his answers to the barrage of stupid questions fired at him throughout the mid-'60s footage. "How many of the people who labour in the same musical vineyard in which you toil are protest singers?" one reporter asks. "I think there's about 136," Dylan says. Could he please suck his glasses for the camera? "Suck 'em?" Dylan replies. "Do you want to suck 'em?" The man declines. Dylan turns to the press gang. "Does anybody want to suck my glasses?" Another journalist asks to look at his left fingertips, imagining they've been toughened by playing electric. "I wouldn't even show you my right hand," Dylan fires back.

Booed at every concert by folkies appalled by his new direction, he appears to relent. "This is a folk song. I want to sing a folk song now," he says. There is rapturous applause. "I knew that would make you happy," Dylan says. "This is called 'Yes, I See You've Got Your Brand New Leopard Skin Pill Box Hat'." He is, frankly, hilarious. But the fun is evaporating fast, as Dylan is hailed repeatedly, against his protestations, as the spokesman of his generation, the conscience of Young America. He looks miserable, exhausted, trapped.

And still the spirit rages through him, face pinched beneath that mop of curly hair, wailing into the mic as the boos ring in his ears, until at last he can take no more.

Fans may also want to check out Dont Look Back (a somewhat unedifying portrait), The Other Side of the Mirror and Eat the Document.

The Free Trade Hall show (known colloquially as "The 'Royal Albert Hall' Concert") is my favourite record. Make your life immeasurably better by picking up a copy. We don't usually do orders, just recommendations, but I'm afraid this is an exception.
Posted by Rick Burin at 22:14