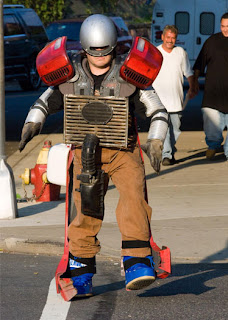 *MAJOR SPOILERS*
Be Kind Rewind (Michel Gondry, 2008) - Jack Black breaks into a power plant for a spot of late-night sabotage and gets comprehensively zapped. Returning to the video store his friend Mos Def is looking after, the newly-magnetised Black accidently wipes every tape in the place. The solution? To recreate the lot, from Ghost Busters to Robocop, King Kong to Driving Miss Daisy. In the process, their "sweded", sub-30-minute remakes turn the pair into superstars, promising to save the ailing shop, owned by tall tale teller Danny Glover. But they can't demolish the place anyway, can they? Jazz maestro Fats Waller was born there. It's a very entertaining film, writer-director Gondry infusing the Purple Rose of Cairo-style narrative with his 'homemade' leanings and bizarre, disarming sense of humour to create another singular comedy-drama, though it lacks the consistency of his previous film, The Science of Sleep. The absurdist, elliptical opening is superb, setting up a cracking first 50, while the Waller-biopic wrap-up is affecting and imaginative, but in-between the interest somewhat wanes, with a lack of focus and a dearth of jokes. Still, it's hard to be too critical of a film that reverses everything I ever thought about spoofery (isn't it supposed to be tired and lazy?) - or encourages its protagonists to shoot night scenes by turning their camcorder onto 'negative' and then wearing photocopies of their own faces. (3) 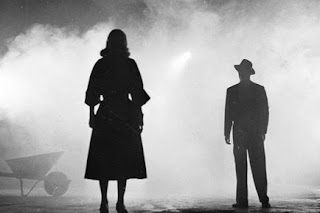 *MAJOR SPOILERS*
The Big Combo (Joseph H. Lewis, 1955) is perhaps the visual apex of film noir, with truly astonishing cinematography by the pioneering John Alton, working alongside cult B-movie director Lewis. The story isn't too shoddy either. Obsessive cop Cornel Wilde fights to bring down crime lord Richard Conte, while battling for the soul of the gangster's girlfriend (Jean Wallace). As they tussle, Conte's second-in-command (the great Brian Donlevy) plots a coup, trying to enlist his boss's gay hitmen (Lee Van Cleef and Earl Holliman) to snuff out his former underling. Wilde is powerful in the lead and Conte a wonderfully slimy villain, while the subservient hoods are perfectly cast. And though this thriller may lurch from one stunningly-shot scenario to another, serving up a hatful of duff lines alongside the great ones, its high spots remain truly unforgettable. That means Donlevy's downfall, of course - one of the best death scenes in cinema - and the offbeat ending. But it also means the moody credits, the sickening torture sequence and the attempted hit on Wilde, complete with a gutting cut to a smoking cigarette. In his classic 1950 noir Gun Crazy, Lewis had displayed innovation to the point of showboating, shooting an entire bank robbery from the back seat of a moving car. Here his wizardry is more subtle, characterised by confident stylisation and a single concession to inspired gimmickry (I'm thinking of a hearing aid being wrenched out). In that way it's more mature, though the loss of his freewheeling sensibility makes it less energetic and arguably less exciting. It's still a mightily impressive, distinctive work, a punchy premise given sumptuous, often dazzling treatment despite the erratic script. (3.5)
Posted by Rick Burin at 13:40