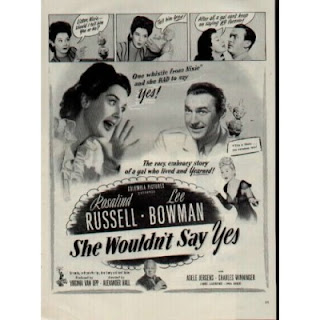 "I seem to spend the better part of my life saying 'What are you doing here?'"
She Wouldn't Say Yes (Alexander Hall, 1945) is not to be confused with She Couldn't Say No, the Jean Simmons/Robert Mitchum mess presided over by the obsessive Howard Hughes. Rather, it's a tail-end screwball comedy that veers all over the place - sometimes going where we wish it wouldn't - but provides a few laughs along the way. Especially with that joke about the policeman. Rosalind Russell is a psychiatrist who (literally) bumps into clumsy cartoonist Lee Bowman and spends the rest of the film trying not to fall in love with him. Adele Jergens, hamming terribly as a Garbo-voiced actress with a heap of neuroses, also has eyes for moustachioed Bowman, leading to complications that are often too offensive to be funny, while lacking an internal logic. Like Bowman tricking Russell into marriage by telling the judge she has learning difficulties. Or her outrageously ill-conceived joke about asthma. If you can stomach those elements, and I found it tough, the film isn't a complete write-off. The performers are bright and there are a smattering of good one-liners, while the production design by Van Nest Polglase (head of art direction at RKO during the Fred and Ginger series) is eye-poppingly luxuriant. Check out the door panels in Russell's apartment - massive plaster of Paris discs apparently styled after Roman coins. Add to that the peculiar propagandist opening, the chance to see Bowman in a rare leading role (he's essentially a less charming Brian Aherne), the pleasant wrap-up and the novelty of having a heroine who's a vegetarian, and classic comedy buffs will probably want to give it a look. But it remains a reminder that despite the awesome movies the '40s were a somewhat less enlightened time, and it's easily the weakest film in the excellent Icons of Screwball Comedy sets. (2)

Trivia notes: 1) If you think you recognise the voice of the plump chap who gives up his seat on the train to Ros, you're right. Arthur Q. Bryan was better known as a voice artist. His primary meal ticket? Elmer Fudd. 2) The slapdash nature of the production is epitomised by a sign on a hospital door in the opening scene, which reads: "CHIEF NEURO-PYSCHIATRIC BRANCH". "Pyschiatric"? Really?
Posted by Rick Burin at 14:42