The Hess story - in Ian's own words

In 1941, senior Nazi Rudolf Hess embarked on an ill-fated 'peace mission' to Scotland. After crashlanding in Glasgow, he was guarded by schoolteacher and trainee soldier Ian Bailey. This is the story, in Ian's own words:

“I joined up in 1940. I went into the Scots Guards and I was commissioned the following year into the Highland Light Infantry, City of Glasgow Regiment.

“In the early months of 1941 I went up to Glasgow to the depot, waiting to be posted to a battalion. On May 10th 1941 I was the orderly officer for the day. I went to bed at midnight. At about half past one in the morning the duty officer came up to my room and said, ‘A German prisoner’s been brought in – get up!” ‘Oh,’ I thought, ‘Hell.’ So I had to get up and get dressed again; and then I went into the barracks. It was a moonlit night, and there was a man with his arms around the necks of two of our soldiers, limping.

“When I hoved into sight, one of the soldiers left him, and the fella put his arm around my neck – little did I realise whose arm it was. We hurtled along to the little place we had to look after sick men. The doctor was roused, because this fella had hurt his foot when he parachuted.

“We took his boot off, and he made very Germanic noises, and we thought, ‘A Brit wouldn’t make noises like that’. I thought, ‘I hope they get rid of him, because I want to get back to bed’ – it was cold, and I hadn’t got my overcoat on. They said, ‘There’s a room upstairs, you can guard him.’ So I thought, ‘Damn’.

“Well, a Corporal was laid on as well and we took this chap up to this room and watched him get undressed, and he had very nice long johns on, I remember – very nice clean long johns. Then he got into bed and I put the Corporal in the corridor outside with his rifle and fifty rounds of ammunition, and I sat down in an armchair beside his bedside.

“But he didn’t go to sleep, he put his hands behind his head, and just gazed into the distance and I really felt quite sorry for him. I thought, ‘The poor devil, he’s in the bag for goodness knows how long’. And at about half-past five in the morning he got out of bed and started doing knees full-bend exercises, groaning all the while! So, I went outside into the corridor where this Corporal was and said, ‘Get the doctor out again’.

“The doctor was very cross at being roused twice out of his bed by a German, so he sent one of his minions with a Mickey Finn to put him out, and then he was quiet for the rest of the evening. At about half-past eight we gave him some breakfast and I was relieved and the next orderly officer came and took over from me, and so I went to bed – this was Sunday – and I got up later on in the evening, and spent the evening with some relatives I had along the South side of Glasgow, and I remember saying, ‘I had an interesting evening, I had to sit with a German prisoner – they brought in an airman.’ He’d given his name as Alfred Horn and he wore the rank of the equivalent of a Captain on his coat.

“On Monday evening, in the mess, when I went in for dinner that evening, there was a bit of a buzz that that German who’d been brought in on the Saturday night was no ordinary German, and then on Tuesday morning in all the headlines in the papers: ‘HESS LANDS IN GLASGOW!’ I thought, ‘Of course it was Hess' – but you didn’t expect to see Hitler’s Number Two in the barracks in Glasgow!’”

“They often told the story of Hess landing in Glasgow, but they hardly mentioned Maryhill. It was important to me because I’d looked after him. Then, the next move was May 10 1981, forty years later. I woke up early in the morning. They were saying on the radio, ‘We’re going to have a talk by Mr MacRobert’, and Mr MacRobert came on and said, ‘I wonder if my listeners realise that forty years ago today, Hess landed in Glasgow’ – well I woke up!

“So I stormed into school [Manchester Grammar], and I saw the High Master [headteacher] and I said, ‘Where’s Radio Highland?’ – which is where this talk had come from. ‘Inverness.’ So I wrote to Mr. MacRobert in Inverness and I said, ‘Very interesting talk you gave, but as a matter of interest, it was Second-Lieutenant Ian Bailey who looked after him, not Corporal Willie Ross.’ Just to put the matter straight, you understand.

“And I got a very nice letter back. He said he’d met Corporal Willie Ross after the war was over and he had told him this. And where had he met him? In Holyrood Palace in Edinburgh where the business of Scotland is done. And what was he then? Secretary of State For Scotland in Wilson’s Government! And when he retired he was given a peerage and finished up as Lord Ross of Marnock. I’ve got a book called ‘Famous Scottish Soldiers’ – one is Lord Ross of Marnock. Why? Because he ‘guarded Hess’ in 1941! Sometimes there ain’t no fairness in the world! Corporal Willie Ross, Lord Ross of Marnock! Yes, they didn’t do fairly by me at all.”

This is a full transcript of the interview with Ian. For all the background on the story, see the main article here. 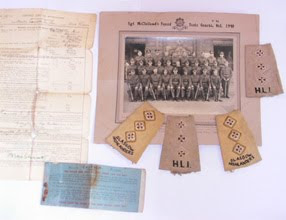