Six films in our latest roundup, including Chris Morris on the big screen, Toy Story re-appraised and X-Men going out with a very loud whimper. 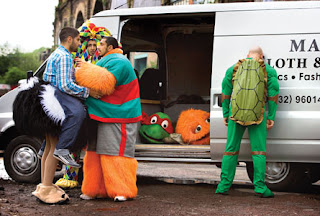 *SOME SPOILERS*
CINEMA: Four Lions (Chris Morris, 2010) is a movie about four homegrown jihadists that plays its confrontational premise largely for laughs. Chris Morris, the main brain behind The Day Today, Brass Eye, Nathan Barley and the short film My Wrongs, has played down suggestions that his film is a satire, saying his intention was to try to make sense of a world in which Yorkshire is breeding suicide bombers. The result is an Ealing-style farce that celebrates the comic incompetence behind terrorism, whilst stressing the confusion and human frailty of its subjects. It lacks more universal insight and has no real teeth beyond its arresting raison d'etre, but it is - as the promotional material has made clear - "funny". It is also unexpectedly poignant.

Omar (Riz Ahmed) is a young Muslim from Sheffield. He has a wife, a kid and a plan to create mass carnage through a programme of suicide bombings. (Un)fortunately he's surrounded by idiots and, from Ponds Forge to Pakistan, his earnest, misguided plans are sabotaged by bleach stockpiler Fessal (Adeel Akhtar), theme park enthusiast Waj (Kayvan Novak) and maniacal convert Barry (Nigel Lindsay). The script, co-written by Morris and Peep Show creators Jesse Armstrong and Sam Bain, is stuffed with great one-liners and ridiculous comic episodes, Morris building on real-life events to create absurdist flights of fancy that are often breathlessly funny. The scene in which Barry tries to justify his plan to blow up a mosque will surely go down as a classic and Fessal's adoption of various vocal disguises passes into sublime, deadpanned silliness, while his demise is inspired.

The film may not be the incisive, all-encompassing spearing of the subject matter that fans of the director had hoped for, but it's bold in another way, asking us to empathise with its characters - and to try to understand them. Though their grievances are shown as hypocritical and wrong-headed, the protagonists are fundamentally likeable (Barry aside), and the subversive presentation of Omar's homelife is particularly affecting. There's a fantastic sequence in which he tries to justify his actions to his young son by transplanting them to the world of The Lion King, while the farewell to his wife in a crowded hospital is just heartbreaking. The film has no strong message, with a final shot that manages to be both clever and frustratingly unclear, but it's extremely well-written and frequently hilarious. And if Four Lions is an altogether different beast to the one most people were expecting, on its own terms it's pretty great. (3.5) 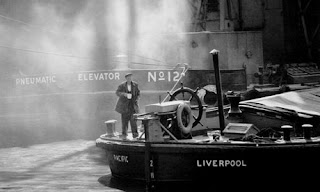 Of Time and the City (Terence Davies, 2008) - The fifth feature from Britain's greatest living director, Terence Davies, was shot for just £250,000 as part of Liverpool's European Capital of Culture celebrations. His first movie since 2000, it followed years of failed, thwarted projects. Anyone familiar with Davies' work will recognise his pet concerns here, as he uses the city as a canvas on which to paint memories of childhood and lost innocence. He no longer recognises the city; barely recognises himself. Davies delivers an intensely personal voiceover that's tragic, verbose (he has a nice turn of phrase) and ripe for parody, offering one part incomprehensible wordiness to every dose of pithy poetry.

Some have hailed this as the director's greatest achievement, but it is only when Davies stops yapping and dedicates himself to those unparalleled fusions of music and nostalgic visuals - passages of lyricism, irony and sorrow - that the film really approaches the brilliance of his earlier work. The sequence set to Peggy Lee's 'The Folks Who Live on the Hill', charting the move from terraced housing to the false dawn of high-rise blocks, is one of the best things he has ever done. Oddly, though, the continuation of that thread, which seems to stress the terrible human cost of such schemes, as young children return to the hellish towers, is interrupted by Davies going on about municipal architecture being a bit of an eyesore, comprehensively undercutting the effect. On second viewing, Of Time and the City looks the same as first time around - only more so. It's erratic, lurching from truth to redundant repetition, though when it works, it's glorious. (3) 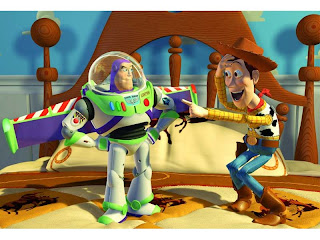 "Would you like more tea, Mrs Nesbit?"
I enjoyed Toy Story (John Lasseter, 1995) a lot more than when I was a kid, which might be a criticism. The plot revolves around cherished sheriff toy Woody (voiced by Tom Hanks), who's tossed over by Andy in favour of shiny new space ranger Buzz Lightyear (Tim Allen). Buzz, meanwhile, is convinced he's the saviour of the galaxy, as opposed to just being a toy. It's on a smaller scale than later Pixar efforts, and of course digital animation has developed a lot in the past 15 years, but it's very well done, with appealing characters, clever jokes - including a great recurring gag about Woody being a murderer - and a lot of heart, reinforced by Randy Newman's lovely song score. One complaint: as Lasseter points out on the DVD, Woody's monologue in Sid's room, perhaps the best scene in the film, shouldn't have been trimmed. The extended scene is even better. (3.5)

Toy Story 2 (John Lasseter and Ash Brannon, 1998) is often cited as part of that select band of superior sequels: along with Aliens, X2, Grease 2 and Look Who's Talking Too, but to this reviewer it falls just short. Sure, it builds on the original in a host of ingenious ways, with the arrival of Emperor Zurg a stroke of genius, but the pay-off to that sequence is clunky, stupid and unfunny in a way that Pixar never is, stopping the film in its tracks. And despite the multitude of great running gags (like Rex becoming a computer games nut) and imaginative action sequences (the cones set-piece, that stunning opening scene), the film is never quite as sharp, dark or exciting as the first entry. It's still pretty much fantastic, though - the risible Empire Strikes Back spoof aside - and I enjoyed the film's concessions to heavy sentiment, including Sarah MacLachlan's song When She Loved Me, which soundtracks a moving flashback for Joanna Cusack's cowgirl character Jessie. (3.5) 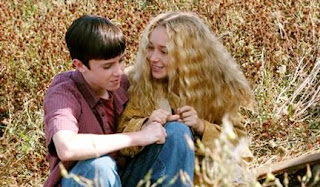 The Dust Factory (Eric Small, 2004) is an interesting fantasy film with a genuinely peculiar, unsettling middle section. Ryan Kelley is engaging, playing a young boy who gives up talking after a series of family tragedies. Falling from a bridge into the river, he awakens in The Dust Factory, a place between Heaven and Earth inhabited by free-spirited dawdler Melanie (Hayden Panettiere) and his grandfather (Armin Mueller-Stahl), robbed of speech in the real world due to Alzheimer's. The only way out of the world is via a leap of faith from a circus trapeze, above a pit of quicksand-like dust.

Panetterie is more conventional and less ethereal than Annasophia Robb's similar character in Bridge to Terabithia, while the film itself is somewhat less coherent and affecting. The characters' method of escape also doesn't seem that tricky (surely they should return to Earth if they're caught, not if they fall?), while the lure of the Dust Factory itself is somewhat dubious. But the acting is good and the friendship at the heart of the movie works really nicely. Kudos too to director Eric Small for making the material in the big top so formidably odd. (3) 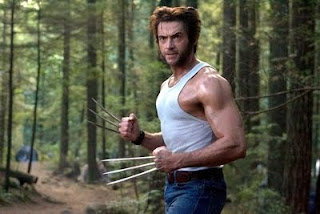 X-Men: The Last Stand (Brett Ratner, 2006) is alright in itself, but undoes some of the braver, more interesting and satifying elements of the second film to create a somewhat underwhelming "end of days" action scenario. Though watchable, it's also misanthropic and lacks the sense of fun prevalent in the first two entries. Hugh Jackman is typically good value, but the treatment of Storm (Halle Berry) and Rogue (Anna Paquin) is frankly a travesty, and the introduction of Vinnie Jones as The Juggernaut is going to have to go down as a bit of a misfire. Ellen Page is notably underused. Let's pretend this one didn't happen, like we do with The Godfather Part III. (2)
Posted by Rick Burin at 22:13