That's a pun on Where's Wally. Not a very good one, but a pun nonetheless. Two more reviews for your reading pleasure, he said presumptuously. 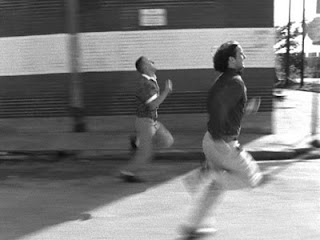 SHORT - Bottle Rocket (Wes Anderson, 1992) was the director's first film, later expanded into a 1996 feature featuring colour photography, impeccably stylised visuals and James Caan. Owen Wilson is Dignan, a neurotic young robber embarking on a mediocre crime spree with his brother and his friend Bob. This original is low-budget, but despite the absence of Anderson's trademark look, the black-and-white cinematography is crisp and his script - co-written with Owen Wilson - hints at the quiet absurdity and deft sentimentality of his phenomenal subsequent movies. Though slight, it's pretty rewarding, and valuable as a sign of things to come. (3)

WALL-E (Andrew Stanton, 2008) is another gem from Pixar, following the travails of a lonely waste disposal robot who travels to a space station in pursuit of the girl he loves - a reconnaissance droid called EVE with big blue eyes and a "shoot first, bleep questions later" mentality. The first half hour is utterly dazzling, featuring a hero who's superbly drawn in terms of both animation and character, plodding around a startling, post-apocalyptic Earth, salvaging interesting items from the rubble and relaxing in his trailer with regular blasts of Michael Crawford. After WALL-E blasts off into space and humans enter the picture, it's marginally less compelling (and occasionally a little confusing), though the quality gags continue to come thick and fast and the studio's commitment to delivering effective, non-saccharine pathos is much in evidence. There's one particularly moving moment employing EVE's video memory bank that's judged to perfection. Pixar was to scale even greater heights with Up, one of the best films of recent decades, but WALL-E is no small achievement: an ambitious, lovingly-etched narrative elevated by breathtaking visuals, with a plucky, resilient, touching star who'll live long in the memory. (3.5)
Posted by Rick Burin at 22:36