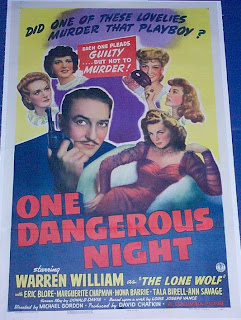 One Dangerous Night (Michael Gordon, 1943) was the second-to-last of Warren William's nine appearances as The Lone Wolf, a reformed jewel thief who tackled crooks and enjoyed oddly platonic relationships with damsels in distress. After the absolutely sensational Lone Wolf Spy Hunt, arguably the greatest B movie of all time, the series found a slightly lower groove in a series of undemanding mystery-comedies with premises of varying ingenuity. The generically-titled One Dangerous Night (giving a clue to the content for patrons who might have missed the trailer; the next year's Boston Blackie was called One Mysterious Night) is fairly standard jewel robbery stuff and notable only really for the timeframe, with the crime solved over Independence Night. There's too much exposition at the start, particularly for a film that only runs 77 minutes, though as soon as The Lone Wolf tells his oxymoronic companion, valet Jamison (Eric Blore), that the pair should "go off to crash a party together", it picks up. The cast is stuffed to bursting with familiar B-movie faces, including Frank Sully (who played Sgt Matthews in several of the Blackie films), noir legend Ann Savage (Detour) and Louis Jean Heydt, along with returning Lone Wolf alumni Thurston Hall and Fred Kelsey. Williams, meanwhile, is his usual delightfully irreverent self. The scene where the star suddenly whips open a door displays his trademark sense of danger - that commodity someone silly once said was required of every great actor (ah yes, like Lillian Gish, or Gary Cooper) - and he bounces off Blore as well as ever. Despite its formulaic nature and the slow opening, the film remains good-natured fun. A weaker series outing, perhaps, but if you've come this far with The Lone Wolf, you'll want to check it out. If you haven't, you probably won't. (2.5) 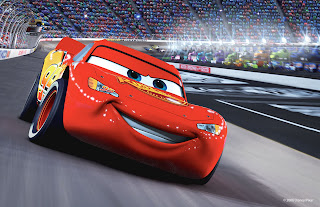 Widely held as Pixar's weakest, Cars (John Lasseter and John Ranft, 2006) is unexceptional but easy-to-take, with a well-worn plot given bright treatment. As has been said before, it's Doc-Hollywood-but-with-cars, as a speedy, superficial young buck - race car Lightning McQueen (voiced by Owen Wilson) - gets stranded in a small hick town where the residents' goodheartedness and easy-going nature start to work their magic. As in the Michael J. Fox-starrer, our conceited hero is asked to repair the damage he caused during his noisy arrival, and ends up dating a female lawyer who wound up in the area after an unhappy stint in the big city. (Having said that, Doc Hollywood itself is a hybrid of Local Hero, The Secret of My Success, a Dr Kildare, and a complete mess, so it's hardly the essence of originality.) Cars is well-short of the studio's best: Up, WALL-E, Ratatouille and Monsters, Inc., but the usual spark is periodically apparent, particularly in the treatment of tractors and a hysterical epilogue in which Toy Story, Monsters, Inc. and A Bug's Life are given a new spin (pun intended). Elsewhere, colourful characters and cut-to-the-chase races compensate for the sometimes slack narrative and muddled motor-y message. Nice James Taylor song, too. (2.5) 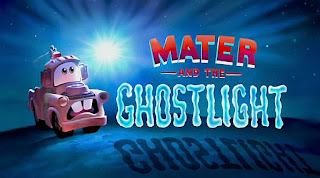 Pixar typically include a spin-off, direct-to-video short on each feature film DVD. The one for Cars is DTV SHORT: Mater and the Ghostlight (John Lasseter and Dan Scanlon, 2006), in which the principal comic relief character from the movie is apparently pursued by an unearthly blue glow. I'm not sure quite what the point is, but it's an OK watch, and the final gag is fairly chucklesome. (2) 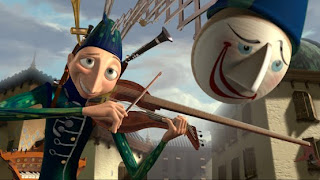 Being a made-for-theatres outing, SHORT: One Man Band (Mark Andrews and Andrew Jimenez, 2005) is understandably better. Set in a lushly-realised Italian piazza, it sees rival musicians face off in a fight for a peasant girl's penny. The battle is as imaginative as you'd hope, and the whole thing has a great sense of place, but it takes an ill-conceived, unexplained turn near the close that's, like, well random, and trips the whole thing up. Shame. (3) 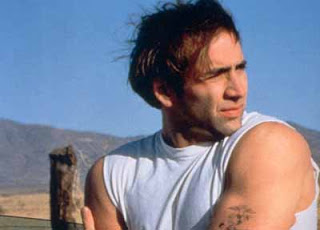 - "Did you guys come over here to arrest me?"
- "It kind of looks that way, Wayne."
Red Rock West (John Dahl, 1993) was made by the director a year before he wowed most everyone alive with The Last Seduction, a dazzling, resolutely nasty neo-noir that would presumably have taken home a bevvy of Oscars had it not been screened on TV first. Whoops. The earlier film is an effective, smirkingly fatalistic thriller about a drifter (Nicolas Cage) who's mistaken by lowlife Wayne (J.T. Walsh) for the hitman (Dennis Hopper) he's just hired to take care of his wife (Lara Flynn Boyle). Dahl is a gifted director and for the first hour it's pretty triumphant: atmospheric, exciting and riotously enjoyable, with an interesting treatment of creeping moral corruption and little clue given as to where it's heading next. But then the tightly-wound plot starts to unravel, with improbable (and therefore uninteresting) twists creating the enduring mental image of Dahl at his writing desk, scowling and scratching his head with the end of his pencil as he wonders how we got from that to this. It's still fine viewing, with a brooding, ever-present score and Hopper's excellent performance as Lyle from Dallas, a Johnny Cash look-alike of a hitman with an inferiority complex and a sentimental attitude to the Marines. It picks up for the last five, too. (3) 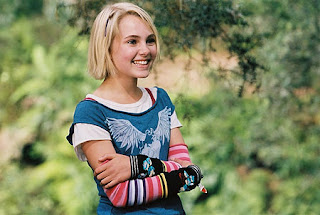 Bridge to Terabithia (Gabor Csupo, 2007) is perhaps the loveliest film I'll see this year - at least until I dig Remember the Night out for New Year's Eve. Josh Hutcherson is a fifth-grader (he's about 10) who finds solace from schoolyard bullying and home troubles with new classmate AnnaSophia Robb. The pair close their eyes and open their minds, conjuring a mythic land in a nearby forest that helps them confront their real-world problems - but tragedy is just around the corner. Former animator Gabor Csupo's understated handling, subtly incorporating fantastical elements, is perfect for the material, and he's aided by a trio of fine juvenile performances: from Hutcherson, Robb and Bailee Madison - playing Hutcherson's younger sister. T2 villain Robert Patrick is also very good, playing a gruff dad presumably not fashioned from liquid metal. There are very minor weaknesses, like a slight overreliance on musical montage and Zooey Deschanel's underwritten part as a teacher, but this is an extremely assured, intelligent, sensitive film with a believable and immensely touching friendship at its core. (3.5) 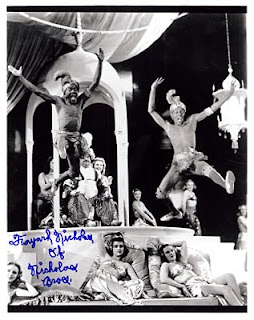 Harold and Fayard Nicholas dance for the Sheik of Araby.

Tin Pan Alley (Walter Lang, 1940) is a superior example of those composer biopics that were all the rage in golden era Hollywood - but with fictional songsmiths! It also appears to be employing the WWI-as-WW2 dynamic somewhat ahead of time. John Paine and Jack Oakie are musical publishers in 1915 New York. John's romancing tuneful Alice Faye, while Jack's got his sights - somewhat unrealistically - on leggy dancer Betty Grable. They all hit the big time, but it takes America's entry into WWI (late as usual) to iron out their differences. Attractive performances, top-drawer songs and an appearance by spectacular hoofers Fayard and Harold Nicholas, doing yet another eye-popping routine, make this well worth catching. (3) 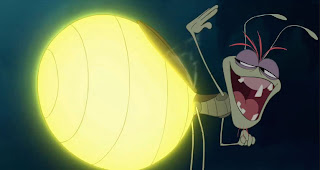 CINEMA: The Princess and the Frog (Ron Clements and John Musker, 2009) - A lazy prince and a workaholic waitress fall in love after being turned into frogs by a voodoo spiv. That’s the premise of Disney’s return to hand-drawn animation, an enjoyable ride set in Jazz Age Louisiana that smells suspiciously like progress - that and swamp water. Waitress Tiana (voiced by Anika Noni Rose), the studio’s first black heroine, dreams of opening her own restaurant, while her best friend Charlotte fantasises about marrying a prince. The arrival of a ukulele-playing royal (Bruno Campos) promises to help them both achieve their ambitions - if only a rakish occultist hadn’t just turned him into a frog. It’s an enjoyable ride, with a rich New Orleans flavour that extends to an agreeable jazziness in the film’s many new tunes, while the forays into art deco animation are nicely handled. And if too many supporting characters seem to be based on those from previous Disney hits, at least there’s Cajun firefly Ray, a funny and touching comic foil. But the film’s side-stepping of the real difficulties facing black Americans in the 1920s seems hamfisted in the extreme, undoing much of the good done by its bold setting. Also, fireflies can’t talk, but we’ll let that slide. (3)
Posted by Rick Burin at 13:37