Arthur Christmas, investment bankers and the most fun you can have while laughing* - Reviews #92

*I'm paraphrasing Woody Allen, and quite poorly at that. This batch of reviews is a veritable grab-bag of diverse stuff I found lying around in my room or at the cinema: a new movie, an old favourite, heaps of shorts (by which I mean short films), a romcom and a film in which Steve Coogan attacks someone with a swivel-chair. I think I've sworn a couple of times in a desperate bid to get in with the cool kids, so if that's likely to offend, please do proceed with caution. 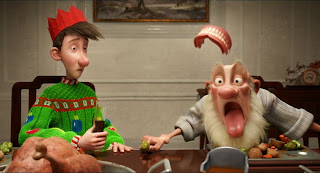 CINEMA: Arthur Christmas 3D (Sarah Smith, 2011) - This is Aardman’s best full-length film to date, trumping Wallace and Gromit: The Curse of the Were-Rabbit (disappointing), Chicken Run (annoying) and Flushed Away (set down a toilet). It’s a great mix of myth-making, heart and visual humour that sparks into life with a spectacular early sequence showing a high-tech present drop by hundreds of highly-trained elves. Fast, funny and inventive, it sets the tone perfectly. Writing to Santa, six-year-old Cornish girl Gwen has asked a few tricky questions, but the film is happy to answer them, creating a cleverly-devised, believable world that features a whole family of Father Christmases: past, present and future. There’s 70-year-old Santa Claus (Jim Broadbent), who’s just going through the motions, his father (Bill Nighy) – a crotchety old sexist – and his two sons: good-hearted, clumsy Arthur (James McAvoy), and Steve (Hugh Laurie) – solid management material, if a touch unfeeling. Steve’s finely-tuned, tech-savvy Christmas Eve operation is something to behold, but when he accidentally overlooks one child – Gwen – it’s up to Arthur and a ragtag band of festive misfits to save the day.

It’s an unusual film, in that it has no love interest and no real baddie. But, co-written by director Sarah Smith and Peter Baynham – who has had a hand in landmark comedies from Fist of Fun to The Day Today and Borat – it’s deft, amusing and imaginative, with intelligent plotting and the odd concession to pitch-black humour, taking in the Blitz, the Cuban Missile Crisis and possible death in the desert. Not that it’s a dark film: quite the opposite. It’s simply joyous, glowing with a love of Christmas (like Arthur’s slippers), stuffed full of jokes (like a stocking) and – aside from the word “cookie” (they’re called biscuits) – possessing that certain idiosyncratic Britishness we’ve come to expect from Aardman (like Wallace and Gromit). The frenetic set-pieces are a wow, the sentimental message is never mawkish and the voicework is very impressive, particularly from Broadbent and the scene-stealing Jane Horrocks. Indeed, all of the elves are unfailingly hilarious, while rarely has a film generated so many laughs from the combination of old man and dustbin. (3.5) 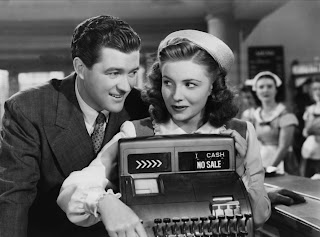 Thank Your Lucky Stars (David Butler, 1943) is perhaps the most purely entertaining movie ever made. A slight plot – songwriter Joan Leslie tries to help crooner Dennis Morgan land a benefit gig with egomaniac Eddie Cantor – is simply an excuse for a glut of brilliant Loesser-Schwartz songs, star cameos and specialty numbers. Dinah Shore does three lovely vocals, including The Dreamer, Morgan and Leslie duet delightfully on I'm Riding for a Fall, and a host of Warner Bros stars turn up for unlikely guest spots. Bette Davis sings (and briefly dances) to They're Either Too Young or Too Old, Jack Carson and Alan Hale perform the vaudeville-flavoured North, and Errol Flynn – sporting a fantastic handle-bar moustache – dances the funniest jig you've ever seen, as a drunkard outrageously overstating his war record in That's What You Jolly Well Get. S.Z. Sakall and Edward Everett Horton buzz about fretting, Cantor does a couple of tunes while playing a dual role as himself and a tour guide who hates Eddie Cantor, Ann Sheridan pops up in a nightie, Bogart gets bullied by Sakall and uses the phrase "movie fans” and George Tobias, Ida Lupino and Olivia de Havilland are introduced as if they're about to provide some highbrow entertainment, before launching into a pig-Latin version of The Dreamer. There's also Spike Jones playing a song on some pans, Alexis Smith whirling around in a nightclub, John Garfield performing a tongue-in-cheek Blues in the Night full of gangster patter, a walk on from director Butler and maverick producer Mark Hellinger, and Hattie McDaniel and Willie Best doing an energetic, Harlem-set number about a cool would-be bride called Ice Cold Katy. Two hours of pure joy. It's as much fun as you can have with a DVD player. (4) (I had this in my last top 100, at #100.) 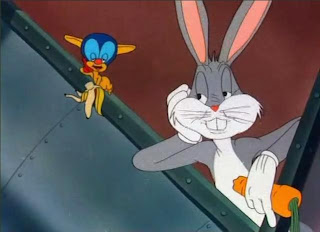 Bugs sort of half kind of does his bit for the war effort.

The "Warner Night at the Movies” feature is a wonderful DVD extra, providing the full programme (minus a B movie) that you might have seen with a film upon release: a smorgasbord of fun-size curios. They're usually amazing, though this one was a little below par, perhaps because they're mostly tub-thumping things about the war. The Vintage Newsreel (1.5), about the Hollywood Canteen, is shot from too far away and had no sound, though I did see Joan Leslie in the distance at one point. Three Cheers for the Girls (Jean Negulesco, 1943, 3) is a fun short that nabs some footage of chorines from various Warner musicals – most directed by Busby Berkeley – then frames it with (supposedly) the same girls sitting in their dressing rooms singing about their status. The excerpts are just that – they miss out key passages of the numbers – but it's still good fun, and a welcome reminder of just how brilliant the staging of that solitary song in Fashions of 1934 is. At the end it goes all propaganda-y in a way that makes no sense. The United States Navy Band (Jean Negulesco, 1943, 1.5) is pretty weak as these things go, with unmemorable music and lots of stock footage of Washington a. Food and Magic (Jean Negulesco, 1943, 2.5) is a fairly entertaining public information film, with Jack Carson explaining that a woman in the audience has wasted several billion tonnes of bread. I think she's emblematic of America, because it seems unlikely that one person could have done that, or that she wouldn't be in jail if she'd done so during a war. Falling Hare (Robert Clampett, 1943, 2) is a disappointing cartoon pitting Bugs against a malevolent little gremlin who likes to wreck aircraft. The story doesn't really make sense – it seems to be a propaganda film without a message – though it's notable for one eerie bit where the plane flies over an American city, and heads directly for two twin skyscrapers. 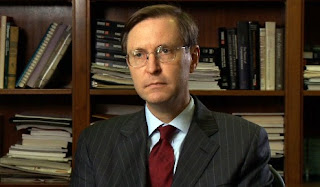 This man is about to look like a twat.

Inside Job (Charles H. Ferguson, 2010) - Excoriating polemic about the recession, explaining in crisp and clear detail what went wrong, who was to blame and what happened next. It's brilliantly-researched, cleverly assembled and forcefully-argued, though there is a slight issue with the selective and possibly disingenuous editing used to stitch up some apparently deserving interviewees. While it's revealing to see the dean of Columbia Business School drop his mask and spit: "You've got three minutes, so give it your best shot", I'm not exactly sure what the ethics are regarding that. Still, it's a vital film: passionate, infuriating and darkly funny, while serving as required viewing for anyone who still has the merest vestiges of trust in the financial sector, or indeed economics itself. "I had to revise a textbook" must be the worst excuse ever for leaving a key post at the Federal Reserve during a financial meltdown. (4) 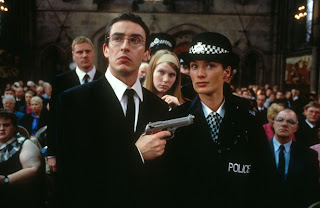 The Parole Officer (John Duigan, 2001) - Pedestrian comedy-thriller that marked Steve Coogan's starring debut on the big screen. He's the title figure, who recruits some newly law-abiding ex-cons for a bank job after he's framed for murder. It's amiable enough, there are a handful of smile-worthy moments (the fight scene using office equipment is good value) and the film generates some suspense by taking its story surprisingly seriously, but the characters are poorly defined - aside from Stephen Dillane's bent copper - and that rollercoaster set-piece is just crap. It's always funny when future stars turn up in bit-parts and you wonder just how hard the producer is kicking himself for not giving them more to do. Here, Simon Pegg has a walk-on as "deflated husband", while Olivia Colman appears for all of 10 seconds, and isn't allowed to speak. (2.5) 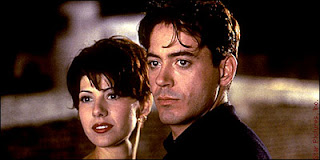 Only You (Norman Jewison, 1994) - Pleasant "Rome-antic" comedy (yeah, I'm good) that's rather less than the sum of its parts. Marisa Tomei is a hopeless romantic who's held out her whole life for a man she's never met: Damon Bradley. Aged 11, she got his name via a ouija board, then had it confirmed by a plump mystic. When - 14 years later - she finally buckles and gets engaged to a foot doctor, she's congratulated on the phone by one ... Damon Bradley, and hotfoots it to Italy hot on his trail. It's a fun idea, but the film isn't particularly funny or romantic - it should have spent far more of its 100+ minutes on the relationship between Tomei and charming man-about-town Robert Downey, Jr. (who is wearing more make-up than her) - and its screwballish plotting is largely predictable. It does have some virtues, though: Tomei's extremely likeable, atypically sensitive characterisation, slick direction from Moonstruck helmer Jewison and photography by the legendary Sven Nyqvist, shooting in Venice, Rome and rural Italy. And Downey, Jr.'s impression of Gregory Peck made me laugh. (2.5) 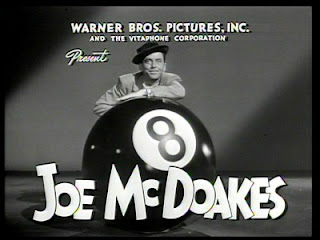 He's behind the eight ball. If you don't know what that means, you haven't watched enough old movies.

SHORT: So You Want to Wear the Pants (Richard L. Bare, 1952) - Another outing from the Joe McDoakes series, which couldn't be more '50s if it starred Stanley Matthews as a Teddy Boy and Korean War draftee with a stack of Bill Haley 45s and a crush on Marilyn Monroe. It doesn't, more's the pity. Instead, George O'Hanlon has a row with his wife about who works harder, then they wake up in each other's bodies and a minimal lack of hilarity ensues. It's kind of bleak, though the way this series can take a promising premise and then accidentally mislay it on the way to the credits is truly remarkable. (1.5) 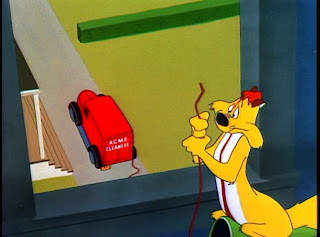 Something amusing but quite hard to fathom is about to happen.

SHORT: Terrier-Stricken (Chuck Jones, 1952) - Passable Tom and Jerry knock-off, which never bothers to introduce its characters' relationship, meaning that we're rather at sea when they start playing tricks on each other. Kind of alright. (2)
Posted by Rick Burin at 20:42