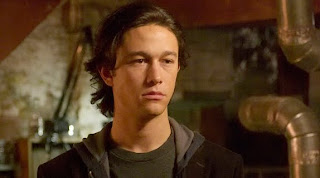 *SEVERE SPOILERS*
The Lookout (Scott Frank, 2007) - This is a truly exceptional character-study-cum-crime-thriller about a former high school hockey star (Joseph Gordon-Levitt) trying to put back the pieces of his life, four years on from causing a car crash that took his girlfriend's left leg and killed two friends. Without a short-term memory, subsidised and patronised by his family, he works nights as a janitor in a bank, sequencing his days in biro. Then he meets charismatic, gaunt Matthew Goode, who introduces him first to a red-haired Luvlee (Isla Fisher) and then to some big plans. Gordon-Levitt's performance is absolutely astonishing - from his odd, shuffling walk (the legacy of his physical injuries) to the pained way he forces out sentences, and his guilt-stricken emoting, articulated partly through an unusually effective voiceover. For me, he's one of the best two or three actors of his generation, and I have never seen him do anything comparable to this - not even Brick.

Like another masterpiece of recent years, Winter's Bone, the film knows what its strength is and zeroes in on it: a compelling protagonist forced to trudge through a swamp of moral degradation in search of the money to ease their burden. The noir-literate script by Out of Sight scribe Frank is extremely eloquent and precise, there are solid supporting turns from Goode, Fisher and Jeff Daniels - playing Gordon-Levitt's blind flatmate - and the chilly cinematography from Alar Kivilo adds to the atmosphere of isolation and quiet desperation pervading this extraordinary directorial debut. The Lookout is what I hoped Memento would be like. It doesn't trick or abuse its hero. It doesn't rely on gimmickry. It shows the human cost of a fleeting error of judgement, the devastating fall-out from one moment of idiocy. And then a second. It's a compassionate, incisive drama so real, so sure-footed, so devoid of cliche, that it just blew me away. (4) 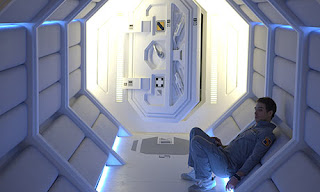 *MINOR SPOILERS*
Moon (Duncan Jones, 2009) - This is a modern sci-fi masterpiece, reminiscent of Silent Running in its intelligent story, retro visuals and atmosphere of loneliness and melancholia. Sam Rockwell is a Moon-based technician, nearing the end of a three-year contract harvesting energy for Earth, who starts to believe that he's not alone. Is he going mad, or is there more to his mission than meets the eye? Rockwell is absolutely stunning in a perilously difficult, demanding part, Kevin Spacey does a great job voicing his robotic colleague (whose changing "emotions" are hilariously detailed via a little yellow face) and the superb Clint Mansell score effectively soundtracks the dizzying narrative as it traverses through confusion and heartbreak to potential salvation. There's also a bit where Rockwell does a funny dance. (4) 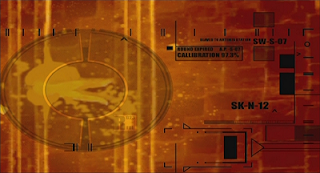 SHORT: Whistle (Duncan Jones, 2002) - Prior to Moon, this was the sum of Jones' directorial career: a short notable for its ludicrous story - a hitman lives in a house way up a mountain, assassinating political leaders with his computer thanks to a long-range missile - poor acting, and one glimmer of brilliance: that arresting final shot. How on earth did he get clearance to use David Bowie's Subterraneans on the soundtrack? Oh I see. (1.5) 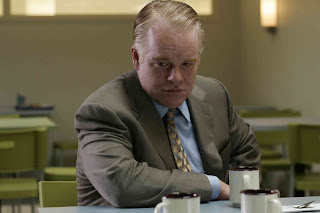 Before the Devil Knows You’re Dead (Sidney Lumet, 2007) – Lumet’s final film is a densely-plotted heist movie, rich in misery and human drama, about a pair of brothers – sweaty, arrogant Philip Seymour Hoffman and twitchy, babyish Ethan Hawke – who decide to knock off their parents’ jewellery store. The time-shifting script is cleverly assembled and Lumet’s handling is typically meticulous: the movie’s cumulative power amassing by the minute as it did in the his seminal cop-corruption drama, Prince of the City. Hawke is very good, Albert Finney gives one of his better turns of recent years as the pair’s father, and Marisa Tomei does her best in a slightly muddled part, but Hoffman blows them all away with an astonishingly effective, multi-layered performance. His flailing real estate salesman appears at first glance to be an utter shit, but people rarely occupy such extremes, and after nearly two hours in his company, you see the hurt, the flecks of human decency amidst the amorality, violence and bitter desperation. A few scenes go on a little long and those featuring a camp, unsympathetic drug dealer (“My mom’s dying”, “Bummer”) seem to have been shoehorned in for the sake of plot convenience, but this gripping film – full of anger, compromise and regret – is a fitting swansong to Lumet’s brilliant career. (3.5) 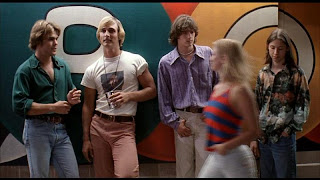 Dazed and Confused (Richard Linklater, 1993) - Linklater's breakthrough is less pretentious than the films he made either side - Slacker and Before Sunrise - with the characters living and breathing, rather than acting as conduits for his assorted philosophical musings. It's a low-key, well-acted ensemble drama about freshmen and seniors celebrating the last day of school in 1976, with a few good jokes and a cast of stars-to-be, including Ben Affleck, Matthew McConaughey, Milla Jovovich, Joey Lauren Adams and Parker Posey. Some characterisations are better and more detailed than others, the standouts being Jason London's "Pink" - a compassionate, forthright star-quarterback-turned-stoner - and Wiley Wiggins's awestruck Mitch, embarking on his first all-nighter. It's always nice to see Adam Goldberg too, playing a nebbish questioning his place in the world. With its period high school setting, sympathetic look at dropouts, and themes of anti-authoritarianism and personal honour, it's clearly a key influence on Apatow and Paul Feig's Freaks and Geeks. More importantly, it's an enjoyable and insightful film on its own terms, a handful of memorable male characters making up for the periodic dramatic lulls (there are a few scenes in which people just drive past each other shouting) and underwritten female roles. (3)

See also: Goldberg went on to appear in the two best episodes of Friends, Terence Malick's The Thin Red Line and Julie Delpy's: 2 Days in Paris. 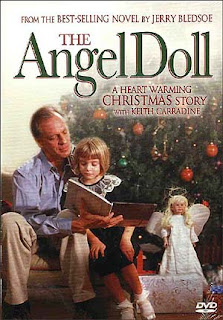 The Angel Doll (Alexander Johnston, 2002) - Overly sentimental Christmas film set in 1950, with aspirations beyond both its budget and its talents. Parachuted in for the present day framing device, former Altman co-conspirator Keith Carradine is the patriarch looking back on his childhood - and his friendship with poor kid Whitey (Cody Newton), who dreamed of acquiring an "angel doll" for a younger sister dying of polio. There are some nice moments in a kind of sub-Stand by Me manner: storytelling around a campfire, bonding in a junkyard, ragging a burgeoning dickhead who then falls off his bike; and both the kids do a decent job, even if Newton has the voice of a 50-year-old homicide detective. But the supporting cast is less impressive and the script veers from the story I was quite enjoying (aside from the mawkish superimposition of the terminally ill girl in the play-within-a-film - bleurgh) to curiously underdeveloped subplots about race and tolerance. It's also saddled with an unfortunate tendency to miss out parts of its narrative at key junctures and, having aimed for weepie territory with an ill-judged twist near the end, then entirely fails to provide the anticipated climax, as Carradine just lounges around, wittering about dolls. It's apparently based on a true story, though, so if that's the way things really happened, fair enough. A decent script editor and a couple of better grownups in the period scenes could still have made it flow a whole lot better. Michael Welch, playing the young Carradine, is apparently now an integral part of the Twilight universe. The film is dedicated to director Johnston, who died shortly after filming wrapped. (2) 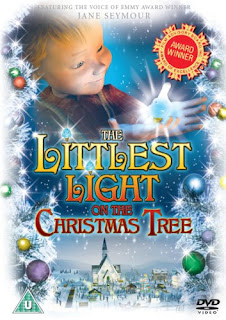 DTV: The Littlest Light on the Christmas Tree (Anthony and John Gentile, 2004) - It's not really Christmas yet, but my fiancee had added this to LoveFilm and they just couldn't control themselves, so we watched it last night. It's a minor animation, very much for children, with primitive CGI, broad characterisation and a surprisingly large number of original songs for a 45-minute direct-to-video production. The visuals are so clunky that it would surely have worked better as a hand-drawn affair or a radio play, but its heart is in the right place and there is a good bit where the tree ornaments come to life - the quality of the animation suddenly ratcheting up a notch as a clown unicycles along a tightrope and some inexplicably nasty Christmas lights decide to duff up the eponymous figure. Not the best Christmas film I'll see this year, but so nice that being any harsher than that just seems mean. (2)

*ONE INSTANCE OF CHILDISH SWEARING IN THIS REVIEWS*
The Man (Les Mayfield, 2005) – Haha, this is rubbish! Eugene Levy plays a dental supplies salesman roped into helping tough cop Samuel L. Jackson bust a gun-running ring in this appalling action-comedy, which imagines itself to be Midnight Run, witlessly spoofs Pulp Fiction, but takes longer to watch than it apparently did to write – and only runs 83 minutes. There are a couple of OK human moments, but the “comedy” is unstintingly abysmal. Lol, he did a fart. Lol, he’s about to be anally violated by customs officials. Fuck me, it’s bad. (1) 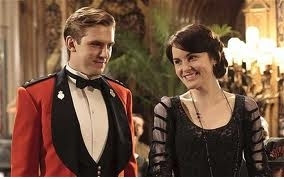 *SPOILERS*
TV: Downton Abbey (Series 2, 2011) - Diverting but disappointing second series that lapses into ludicrousness on a dishearteningly regular basis. The good: Maggie Smith, Matthew and Mary. The bad: plotting straight of cheap melodrama, Brendan Coyle (whose line readings are all absolutely identical) and Daisy, who is just flat-out terrible. Fellowes is clearly more comfortable examining the minutiae of aristocratic life than he is dealing with the lot of the servants, whose stories are almost unfailingly uninteresting. There are effective dramatic scenes scattered throughout the series (the two utilising sentimental period tunes were really nicely done), the doomed romantic couple at the centre are great both alone and together, and Smith's waspish one-liners are a joy, but this decidedly erratic fare is ultimately undone by its stale, silly plotting and muddled execution. (2.5)
Posted by Rick Burin at 22:36