*SPOILERS*
Hard Candy (David Slade, 2005) - Sensational (in both senses of the word) black-comedy-turned-revenge-fantasy about a boyish, 14-year-old psychopath (Ellen Page) holding a suspected paedophile hostage in his flat, and threatening to cut off his balls. Page is jaw-dropping in her star-making turn, Patrick Wilson fine as her quivering quarry, this talky two-hander avoiding staginess through stunning acting, digital effects that shadow its changing moods, and kinetic bursts of frantic action. Troubling, confrontational and throbbing with anger, it's tabloidy in the Sam Fuller fashion, and oddly appealing in its self-conscious, modish references to MP3s, Amazon reviews and Goldfrapp, though the film's deliciously wry sense of humour evaporates in a po-faced, conventional, disappointing final 15. It's still the best new watch of the year, if only for its, err, balls. (4) 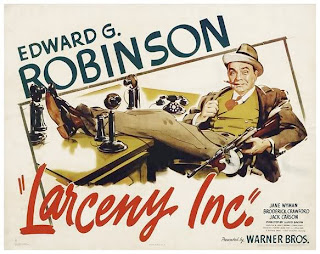 Larceny, Inc. (Lloyd Bacon, 1942) – Very funny little Warner crime comedy about a petty criminal with the gift-of-the-gab (Edward G. Robinson) who gets out of the clink and starts plotting a heist. With his idiotic goons, Broderick Crawford and Edward Brophy, he takes over the luggage store next door to a bank – planning to tunnel in – but finds his plans, and his life, plagued by a moralising adopted daughter (Jane Wyman), an overenthusiastic salesman (Jack Carson) and an entire street-full of fellow traders who think he’s wonderful. The climactic swing towards melodrama is perhaps a bit too strong, and a few of Robinson’s one-liners are more nasty than amusing, but for the most part this is absolutely first-rate, with the star on top form, a particularly funny performance from Brophy – the scene where he’s talked into buying masses of stock by Carson is brilliant – and a supporting cast littered with familiar faces, from Anthony Quinn to Harry Davenport, John Qualen, Charles Arnt, Harry Hayden, Grant Mitchell, Chester Clute, Joe Downing and Jackie Gleason, in an early role as a nosey soda jerk. (3.5) 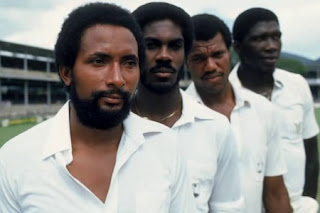 Fire in Babylon (Stevan Riley, 2010) – Entertaining documentary about the West Indies cricket team of the 1970s and ‘80s, with snippets of dazzling footage, informative talking-head interviews and the historical context needed to make sense of the action’s greater significance. (Incidentally, as he says he doesn’t understand the difference, I will be happy to explain to Colin Croft the difference between playing in an unsanctioned triangular series in Australia, and taking a pay cheque to play in Apartheid-era South Africa.) The film is true to its story by creating an interesting, flavourful atmosphere rife with the culture of the islands, but does this by enlisting the help of an annoying, weed-addled Wailer who won’t shut up, a sometimes pretentious broadcaster with a big beard, and some enthusiastic but actually quite terrible cricket-themed music, played on-screen. Including more film of the actual matches and scoring those with the songs would surely have made better use of the slender running time, since sequences like the montage of Malcolm Marshall destroying the England team during the blackwash of 1984 are simply exhilarating. Ultimately it’s merely a good film about a truly fascinating subject. (3) 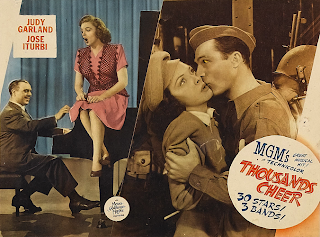 Thousands Cheer (George Sidney, 1943) was MGM’s entry in the ‘all-star WWII flagwaver’ stakes, the spirited everything-and-the-kitchen-sink sub-genre that produced a couple of musical-comedy classics – Warner’s Thank Your Lucky Stars and Paramount’s Star Spangled Rhythm – and a bunch of half-baked but enjoyable films like Hollywood Canteen (Warner again), Stage Door Canteen (RKO) and Follow the Boys (Universal). The story has Kathryn Grayson staying with her colonel father and being romanced by soldier – and former aerialist! – Gene Kelly, who needs to learn the value of discipline if he’s going to make something of himself. As you might expect, Grayson puts on a show to raise morale, resulting in 40 minutes of wall-to-wall sketches and songs featuring MGM’s finest, and compèred by Mickey Rooney. The highlights of that star-fest are Lena Horne’s seductive ‘Honeysuckle Rose’, Eleanor Powell doing a funky tap in front of a badly back-projected curtain, Judy making the most of a daft song featuring Jose Iturbi on boogie-woogie piano, and Rooney’s impressions of Gable and Lionel Barrymore. But they’re arguably upstaged by two earlier numbers from the film’s leads: Kelly’s solo dance with a mop to ‘Let Me Call You Sweetheart’ (which includes him shooting Hitler) and Grayson’s simply lovely ‘Daybreak’ – an absolute gem. Grayson, whose mentor Joe Pasternak produced the film, is terribly affecting and has a marvellous voice, lifting the often humdrum, silly material at every turn. Thousands Cheer isn’t another delight in the Thank Your Lucky Stars mould, but it’s still good fun, particularly for inveterate star-gazers. (And I haven’t even mentioned Frank Morgan’s skit about an amorous barber. Or the Mexican ballet. Or Margaret O’Brien demanding some ice-cream.) (2.5)

See also: For a brief history of all-star Hollywood films, clicky on here. 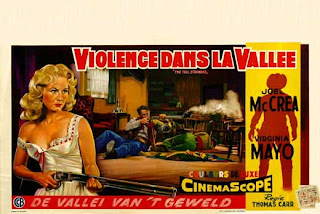 The Tall Stranger (Thomas Carr, 1957) - Typically enjoyable Joel McCrea B-Western, with our wise, tanned, greying hero (no I don't fancy him, you're getting me confused with Maureen Stapleton) caught - as is customary - between a shouty land-owner, unscrupulous gunmen and a wagon train full of women, children and incredibly stupid men. The scene where the crowd is repeatedly won over by whomever happens to be speaking is hysterically funny. Unintentionally, of course. The plot is cleverly drawn, though it shows its hand too early, but the main draw is McCrea, asked to carry a film once more, and transforming every hack line into a thing of naturalistic brilliance. Virginia Mayo, regarded as one of the great beauties of the Golden Age, is OK as a love interest with an uninteresting back-story, while Barry Kelley manages to be both imposing and clunky as the blustering land baron. The action scenes are either flat or confusing, though the exuberance of the stuntmen in the climactic set-piece makes up for the fact that it's a bit difficult to work out exactly what's going on. At least Hans Salter's score hits the target. That and McCrea's performance, a masterclass in turning oatery into gold. (2.5) 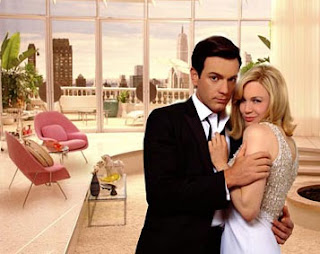 Down with Love (Peyton Reed, 2003) gets a bit of a raw deal. It’s an enthusiastic tribute to the Doris Day/Rock Hudson comedies of the ‘50s and ‘60s – which comprised two agreeably fluffy romances and an iffy black comedy – with a decent feel for the era, incorporating pop culture staples like What’s My Line and Ed Sullivan, and a very funny supporting performance from David Hyde-Pierce in the Tony Randall role. Curiously, Randall himself also appears, though in a disastrously underwritten part. The film isn’t terribly sophisticated, with its innuendo quickly wearing, while the attempt to inject some feminism into the proceedings near the end just makes everything very confusing, but it’s still quite a fun watch. Renee Zellweger – pouting as usual as if her life depended on it – is alternately impressive and annoying in the Doris role; Ewan McGregor makes a reasonable Rock-ish cad. I wish Thelma Ritter and Allen Jenkins were still around. (2.5) 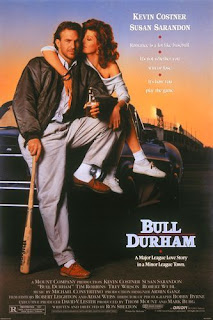 Bull Durham (Ron Shelton, 1988) - A doggedly mediocre baseball comedy-drama - set in the minor leagues and somewhat pleased with itself - about a saucy older woman (Susan Sarandon) who chooses a dim-witted, big-time-bound pitcher (Tim Robbins) as that season's project, but is drawn to the wise old catcher (Kevin Costner) enjoying one last season. Robbins is introduced as little more than a cartoon - perhaps appropriate, since he looks just like a cartoon - so when we're asked to care about him, we can't. Costner, meanwhile, is strangely wooden, while I'm not even sure what the point of Sarandon is. Is she ever good? (Well, I suppose there was Atlantic City.) Is there anyone who fancies her aside from Hollywood casting directors? The film is fairly entertaining, at least until the soft-core fumblings of its final 20, and I particularly liked the small comic scene where Robbins sings the wrong words to 'Try a Little Tenderness', but compared to A League of Their Own, Eight Men Out and especially Field of Dreams, it's strictly minor league. (2.5) 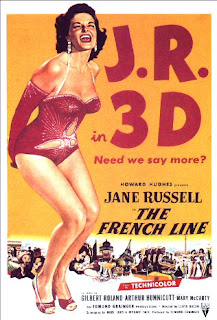 *SPOILERS*
The French Line (Lloyd Bacon, 1953) – Howard Hughes’s ode to cleavage has Jane Russell as an oil millionairess who goes incognito to find her ideal man – and ends up with wrinkly Gilbert Roland. Every woman in the film – though especially Russell – is forever arching their back, bending down to pick something up, or getting out of a chair, the camera lasciviously gawping down their top. It was originally in 3D. I’m surprised they didn’t have someone’s eyes out. The plotting is terrible, the acting little better and the songs largely forgettable, though the number pairing Russell and Mary McMarty, 'Any Gal From Texas', is a lot of fun if you can stomach the amateurish dancing. Roland also has a pleasant voice and his Comment Allez Vous is initially quite charming, before overstaying its welcome. One of the funniest things about Hughes’s films of this period is how many superfluous roles there are for women under the age of 30. Such was his harem of wannabe actresses that he was ultimately forced to create an entire film, Son of Sinbad, just to give them something to do. The French Line, damaged as usual by his interference and seen now in a washed-out print, is a tired, thin, often laughable musical-comedy. (1.5) 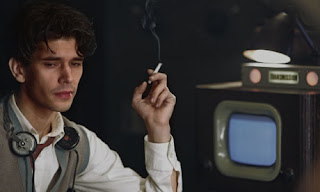 The Hour (S1, 2011) – Abi Morgan’s drama-cum-thriller swings between greatness and mediocrity, chronicling the launch of a groundbreaking BBC news show, as the Suez Crisis hums away in the background, getting ready to explode. The central affair between producer Romola Garai and anchor Dominic West (who acts with his teeth) is spectacularly uninteresting, the political content is both under and over-explained until the last episode, and the programme itself is too often ignored. But The Hour builds as it progresses and there are wonderful moments all over the place, particularly from Ben Whishaw as the resentful, brilliant Freddie. The bit where he finds out that Garai and West have been shagging away is an absolutely stunning piece of acting and his intense, fascinating characterisation is reason enough to tune in. The supporting cast is led by Anton Lesser – excellent – and Julian Rhind-Tutt, who does a fine job with a somewhat one-dimensional part. I also took to the thriller elements; that side of it was pretty engrossing. The Hour starts too slowly, meanders too often and doesn’t always know what its strong suit is, but at its best it is special, and the final hour is a tour-de-force. If only they’d stop saying “Moneypenny”. (3)
Posted by Rick Burin at 21:41