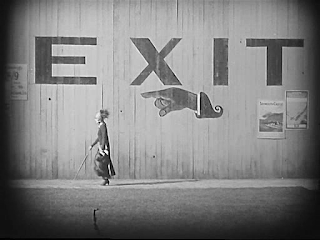 Lady Windermere's Fan (Ernst Lubitsch, 1925) - As a play that's essentially a torrent of epigrams flooding over a skeletal, improbable plot, Lady Windermere's Fan isn't the most obvious fare for silent comedy. In the hands of legendary director Ernst Lubitsch, though, it translates into a touching and memorable film - if a little slow and lacking in giggles. There are some notable changes from the play, largely to make the baddies more humane and the damsel in distress more innocent. The plot is this: Lord Dartington (Ronald Colman) is in love with Lady Windermere. When her husband starts throwing money at a fallen woman (Irene Rich) - she fears the worst. But as becomes clear alarmingly near the beginning of this adaptation (the revelation usually comes at the end of Act Two), he's got a very good reason for doing so. The best of silent acting, indeed most silent acting, proves a lie of those ludicrous melodramatic spoofs employed by lazy contemporary TV shows in which actors who've clearly never watched a film from before 1986 gesticulate wildly and pull absurd, exaggerated expressions. Here, both Rich and Colman show what silent performance was really about: they're subtly expressive, striking just the right balance between what they make obvious and what is implied, or left to us to imagine. Ronnie is notable as a male lead for making the transition to talkies so effortlessly, but he was a major silent star and here he shows why. There are a couple of particularly nice bits of acting: his declaration of love in the opening scene and the sequence where he tells Lady Windermere of her husband's cheque book. The Windermeres are a bit wet (pun entirely intended), and a touch bland, but that means that when Wilde's machinations start tossing them around, we do feel for them. If The Lubitsch Touch isn't quite refined, it's still in evidence, with a few innovations that pave the way for the Pre-code sauciness of Trouble in Paradise, et al. The binoculars sequence, in which a series of men train their goggles on the pouty Rich as she attends a horse race, is very cleverly done, followed by a scene with a shrinking screen that follows Edward Martindel as he follows her. That sense of invention keeps this ambitious film interesting, despite it being shorn of the source material's most obvious asset. (3)
NB: I saw the 89m version held by the American Film Institute and included on the More Treasures box-set (thanks to the University of Leeds library). Apparently there is now a 133m version doing the rounds. 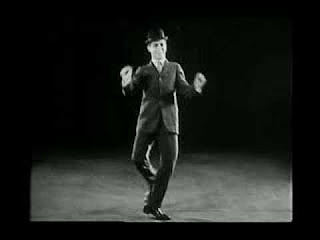 Also from More Treasures comes the SHORT film A Few Moments With Eddie Cantor (Lee DeForest, 1923), the star's first sound appearance, back when he was starring on Broadway in Ziegfeld's Kid Boots. Filmed in 1923, seven years before he shot to screen superstardom with Whoopee, it finds his wide-eyed, pampered-but-put-upon, slightly risque persona fully formed. Cantor performs a brief excerpt from the show - singing a couple of songs and doing some gags to camera - and that's that. The staging is non-existent (he's just standing on a wooden floor, with no backdrop and no props), but it's seven fun-filled minutes regardless, and a must for fans of the star. (3) 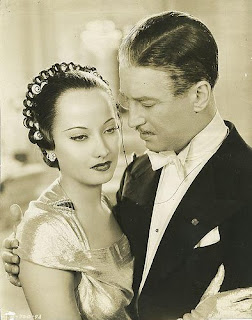 Folies Bergère de Paris (Roy Del Ruth, 1935) is a Lubitsch-esque confection with numbers inspired by the kaleidoscopic choreography of Busby Berkeley. It's also the best film I've caught so far this year. The story sees a vaudeville entertainer (Maurice Chevalier with his familiar persona) impersonate a baron (Chevalier again), leading to romantic complications for both. Ann Sothern is the entertainer's good time gal, with Merle Oberon the baron's flighty wife. It's witty and invigoratingly entertaining, with a fine performance by Chevalier in his dual role and a top supporting cast that includes Eric Blore, Robert Greig and Halliwell Hobbes. Despite the enjoyable plotting, the film's finest moments come through the slew of great numbers at both the beginning and the end of the film. The Singing a Happy Song finale, which won an Oscar for dance direction and features several hundred straw hats of varying sizes, is really something, but all the tunes are great: Valentine, Rhythm of the Rain, Au Revoir l'Amour and You Took the Words Right Out of My Mouth. This was Chevalier's last Hollywood musical until Gigi, 23 years later. (3.5)
Posted by Rick Burin at 22:42