I'm digging out a few articles from the archive that you might not have seen before. Here's the first - a piece I wrote about one of my favourite actresses, Myrna Loy. 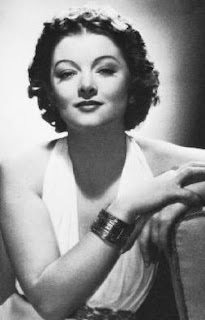 In 1937, Myrna Loy was crowned Queen of Hollywood by 20 million moviegoers in the biggest survey of its kind ever conducted. The achievement, celebrated in front of press cameras as she promoted MGM's Parnell, was the result of Ed Sullivan's quest to find America’s favourite actor and actress. The King, of course, was Clark Gable, the smirking, macho charmer whose enduring place in popular culture would be cemented two years later by Gone with the Wind.

It seems remarkable today that Loy, now largely forgotten, once enjoyed a similar level of fame.

She may not have had a song named after her, like 1937’s ‘Dear Mr. Gable/You Made Me Love You (I Didn’t Want To Do It)’, but contemporaries converted the jazz standard ‘Moanin’ Low’ to serenade her, while E. B. White penned a poem in her honour – ‘Marvellous Myrna, Lovely Loy’. She was the subject of President Franklin Roosevelt’s most public crush, inspired a young Jimmy Stewart to declare, “I’m going to marry Myrna Loy!” and gave ‘30s plastic surgeons the most requested profile of the decade. When Dillinger was gunned down by police outside the Biograph Theatre, it was Loy he’d broken cover to see – in 1934’s Manhattan Melodrama. Even Gable himself was in thrall to Loy’s charms, being pushed off a porch into a hedge for his troubles.

Loy was also a trendsetter: the first actress to work for the UN, an unexpected rebel who went on strike from MGM for equal pay, and a fixture on Hitler’s blacklist, after speaking out against his treatment of Jews. She lobbied for black actors to be given more dignified roles, and was part of the Committee for the First Amendment that battled the Hollywood witch-hunt from 1947. Loy’s portrayals of patient, devoted spouses in some of the Golden Age’s best films saw her dubbed ‘The Perfect Wife’, while Henry Fonda considered her “the perfect movie star”. Even New Hollywood tipped its hat to Myrna, as Bonnie and Clyde’s C. W. Moss called her his “favourite picture star”. It's difficult to say why Loy is so little-known today. Perhaps it's because of her unshowy acting style - the way she complemented, rather than dominated, the other actors on show. Perhaps because she has no one transcendent film - a Wizard of Oz or Casablanca - frequently replayed on TV, lodging her in casual movie-watchers’ minds. Or perhaps the relative scarcity of her work is to blame. Of her 122 features, only 13 are available on DVD in Britain. Whatever, it's a situation that deserves to be rectified.

Loy, born Myrna Adele Williams in Montana in 1905, was a graceful, gracious, hugely appealing actress whose gift for sophisticated, banter-heavy comedy was complemented by an intuitive warmth, subtlety and sensitivity that helped her create maximum chemistry with a succession of legendary leading men. She had an engagingly unusual appearance: a nose that cast wicked shadows, ears that Selznick wanted stuck back to her head and legs that she kept under wraps at all costs, despite her training as a dancer. And after overcoming a severe uneasiness with sound cinema, she was able to project one of the movies' great voices, sympathetic and melodious, but with a funny edge to it.

Discovered by Rudolph Valentino, Loy had braved seven years of bit parts and bizarre typecasting before her career-changing role in the 1932 musical masterwork Love Me Tonight, directed by sometime beau Rouben Mamoulian. Her refreshing performance as a twinkly-eyed, man-hungry countess helped put pay to the ‘vamp’ tag that had seen her play exotic villainesses in films like The Black Watch and The Squall. From then on, her rise was meteoric. The following year was one of firsts. Night Flight was the first movie where Loy was billed above the title, while the superb comedy-thriller Penthouse had been her maiden collaboration with ‘One-Shot’ Woody Van Dyke, the director famed for his aversion to second takes. He took to yelling in the studio canteen about her bright future, before devising the first part written especially for her, in The Prizefighter and the Lady.

When MGM landed the rights to ‘The Thin Man’, Dashiell Hammett’s novel about two married, soused sleuths, Van Dyke fought for Loy to play the lead. He’d pushed her into his swimming pool, he said, and she’d passed the audition. Studio boss Louis B. Mayer eventually relented, giving Van Dyke three weeks to shoot the film. He made the deadline with ease.

If Loy had been good in Love Me Tonight, she was a revelation in The Thin Man. For the first time, audiences were presented with a modern take on marriage: a happily-wed couple with an endless tolerance for one another’s foibles, who matched each other drink for drink, while dabbling in detective work. Loy’s gift for comedy, so clearly on display in Love Me Tonight, had reached a whole new level, and was allied to an understated, often unspoken expression of heartfelt emotion that few performers could equal.

The film’s singular magic is epitomised by a spot of face-pulling. Amateur investigator Nick Charles (William Powell) is trying not to get involved in a murder case. Without warning, the chief suspect's daughter (Maureen O'Sullivan) turns up in his apartment. A Christmas party is in full swing, so he takes her into the bathroom. The young brunette falls into his arms... and in walks his wife (Loy). Cue the anticipated blow-up, with the rest of the film spent in recrimination and regret? Of course not. Powell pulls a face, Loy wrinkles her nose, and the danger's over. It's utterly joyous. The pair, who had acted together previously in Manhattan Melodrama, appeared in a further 12 films. Five of those were Thin Man sequels, while Libeled Lady and I Love You Again were peaks of the screwball genre. In The Great Ziegfeld, a simply enormous biopic, Myrna played the eponymous showman’s second wife. Though she doesn’t appear until the final third, her scenes with Powell are a delight.

But then Loy’s filmography is littered with wonder, from her wide-eyed love interest in Capra’s brilliant Broadway Bill, to her commanding dramatic performance in The Rains Came, a waterlogged disaster pic that’s slipped off the critical radar. She could do state-of-the-nation drama (William Wyler’s The Best Years of Our Lives) as effortlessly as family comedy (Cheaper by the Dozen) and continued to act well into her 70s, delivering a compelling, nuanced supporting turn in Sidney Lumet’s acidic satire, Just Tell Me What You Want. Hers is a body of work ripe for rediscovery and reevaluation. Whether she was paired with Powell, Gable, Cary Grant or Spencer Tracy, the sparks always flew and the relationships always rang true. Maybe Myrna couldn’t grandstand like Bette Davis, or suffer like Garbo, but given a quip and a cocktail dress, she was the greatest.