MovieMail: The Queen of Spades

More Tarzan on the way, but here's a bit of heavy relief. 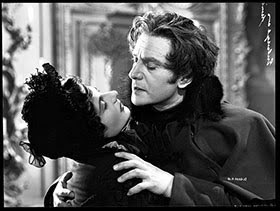 The Queen of Spades (Thorold Dickinson, 1949)

In the summer, Radio 4 held a poll to find the most sought-after out-of-print British film. The winner, by a landslide, was The Queen of Spades, Thorold Dickinson’s bizarre, brilliant 1949 movie, a blend of historical fable and supernatural thriller. Shot for a pittance in a tiny studio next to a Shredded Wheat factory, by a director who’d had just six days to prepare, it’s an opulent, flamboyant film quite unlike anything else in British cinema.

Anton Walbrook plays a Russian army captain who becomes obsessed with uncovering the secret of a card game that could make his fortune. When he learns that an aged countess (Dame Edith Evans) traded her soul for the knowledge, he inveigles his way into her household by seducing her naïve ward (Yvonne Mitchell). “Take life as you find it,” Walbrook’s banker advises him. “I’d rather take it by the throat and force it to give me what I want,” Walbrook hisses, eyes flashing.

Dickinson believed “each film should be a little world in itself” and the one he conjures up in The Queen of Spades is remarkable. Beginning in a gypsy nightclub, the air heavy with smoke, whisky and song, we're a world away from the sedateness of most British movies of the period. The film has a uniquely European flavour, welding its fantastical elements to something that looks and feels like an Ophuls melodrama: all lovestruck waifs, clandestine opera house liaisons and snowy streets. The expressionist photography and Walbrook’s mesmerising, stylised performance, meanwhile, recall silent film.

This masterpiece of atmosphere and suspense uses numerous innovations. When an unseen ghost invades Walbrook’s quarters, the sound you’re hearing is buildings being blasted during the Blitz, mixed with winds from the Scott of the Antarctic soundtrack and the noise of a jet engine reversed. Budgetary constraints influenced the striking visual style while doing nothing to hamper Dickinson’s ambition. The incredible cathedral sequence utilised the following props: one column, one “flat”, one doorway.

This welcome release will not only satiate Radio 4’s audience, but should see The Queen of Spades re-established as one of the most extraordinary films ever to emerge from these Isles. (4)

This review was written for the January 2010 MovieMail catalogue.
Posted by Rick Burin at 13:30