The mythology of Tarzan - Reviews #6 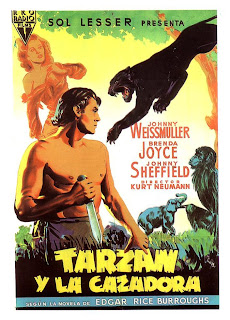 Tarzan and the Huntress (Kurt Neumann, 1947) - In 1942, America's biggest film studio MGM scrapped its legendary Tarzan series, with the option being snapped up by the smaller RKO. There, Johnny Weissmuller was to strap on the surprisingly-revealing Hays Code-approved loincloth a further six times. The first couple saw him scrapping with Nazis, with the second - Tarzan's Desert Mystery (1943) - being as good a piece of nonsensical fluff as you're ever likely to find. I was a bit down on films three and four, as they're tired and largely gloomy affairs, but the penultimate entry - Huntress - is a partial return to form. Its major strength is an understanding of the series' in-built mythology and a welcome sense of fun. Like Superman Returns, then, only not as good. As with the first two MGM entries - the patchy Tarzan, The Ape Man and the superb Tarzan and His Mate - Tarzan's jungle paradise is invaded by hunters, a more sensible plotline than we've come to expect from these Sol Lesser yarns. The villainous gang includes former Warner heavy Barton MacLane and the eponymous huntress - Patricia Morison. Though the film is a touch confused about the morality of stealing animals from the jungle (presumably that was how the bulk of its supporting players came to Hollywood), Tarz does ultimately get pretty narked about the whole thing, leading to a series of lively showdowns. He's accompanied once more by Brenda Joyce and Johnny Sheffield, whose Boy is now a man, with a deep, booming voice. Where the film really scores is in its embracing of the Tarzan legend as our hero lets rip not once, but twice, with his famous yell. The first - so unexpected after four films without it - is a euphoric moment that seems to strip away 15 years of typecasting and weight gain from its wonderful star - if only for a few seconds. For all the film's deficiencies, like a messy, jumbled narrative and comedy scenes shoehorned in at apparently indiscriminate junctures, those two scenes are jolts of pure joy. (2.5)
Posted by Rick Burin at 14:52