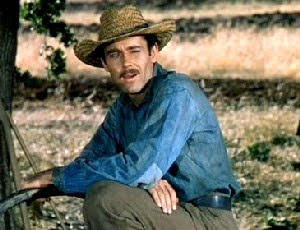 "Revival meeting at Clinton tomorrow night. Be there, brother - it's me and the devil and no holds barred."
The Return of Frank James (Fritz Lang, 1940) - German-born Fritz Lang (Metropolis, M, Fury) was a great director, but his three Hollywood Westerns are a fairly weak triumvirate. There's the flashy but thin Western Union, the utterly risible Rancho Notorious, and this sequel to 1939's Jesse James, with Henry Fonda hunting down the cowards who laid his brother low. Like that overpraised crowd-pleaser, which really doesn't hold up well today, this one has a great first five minutes and spectacular Technicolor cinematography to recommend it, but is too flat, too clean-cut and sorely lacks momentum. It also has an inappropriate, cartoonish sense of humour that jars with the often serious subject matter. That's not to say it's a write-off. John Carradine is superbly utilised; his Bob Ford so insidious that he quivers with cowardice and repressed homosexuality every time he points his gun at someone. He plays a key part in the film's best set piece, battling actors portraying the James brothers on a theatre-stage, then looking up to see Fonda towering on the balcony. There's also the chance to see porcelain Gene Tierney in her first screen role, aged 19. She's cast as a budding journalist who falls for Fonda. Tierney was a better actress than she's usually given credit for, but aside from being pretty and pleasant, she has little to do here. One curious aspect of the movie, borrowed from John Ford's masterpieces Judge Priest and Young Mr Lincoln, is its contention that the way to triumph in the courtroom is to make the public gallery laugh. I've never seen that work in real life. Fonda, who's making most of the quips, was a brilliant actor, but rarely in this film does he get to show it, at least until the last 10 minutes. Still, for the colour, the historical value and a great final shot, the film is worth checking out. You can tick off your favourite Golden Age supporting actors too: Frank Sully (the idiotic Sgt Matthews in several Boston Blackie entries), Irving Bacon (you'll know his face), Henry Hull, Donald Meek, J. Edward Bromberg and Jackie Cooper (the kid in the original version of The Champ) all play a part here. (2.5) 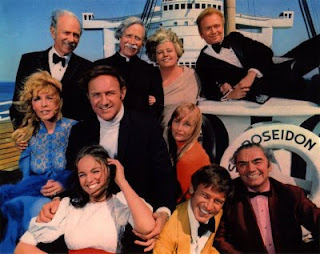 At no time during the film does this happen.

The Poseidon Adventure (Ronald Neame, 1972) has been on my "to see" list for years. Well, I finally got around to it, and I liked it a lot. After an ocean liner overturns, 10 passengers fight their way upwards to the bottom of the ship, in a bid to escape the exploding, flooding wreckage. Among the skilfully-etched archetypes are an all-action priest (Gene Hackman), a cop (Ernest Borgnine) and his ex-hooker wife (Stella Stevens), a friendly, chubby woman (Shelley Winters), two kids, a fitness freak (Red Buttons) and a hippy. The script is incisive, while helmer Ronald Neame exhibits his usual skill, keeping excitement at a maximum through deft, fast-paced direction that draws you into the centre of the action. Where the film really scores, though, is in its realism, with the gallery of A-listers performing the bulk of their own stunts. There's also a bit that seems to nod to The Searchers (yes, The Searchers again), as Hackman interrupts the grieving process with a bark of "We've got to keep moving!" Great stuff. (3.5) 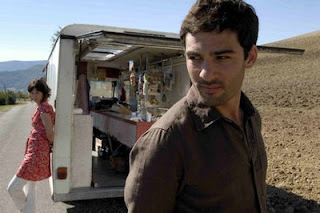 Le fils de l'épicier/The Grocer's Son (Eric Guirado, 2007) traverses well-worn ground in an appealing way. Nicolas Cazalé is agreeably gruff as the titular character, the Prodigal Son returning to the family he left behind (You Can Count on Me, In My Father's Den), whose pastoral existence is in stark contrast with the hubbub of the metropolis (I Know Where I'm Going!, Local Hero, Doc Hollywood). Arriving with his almost-girlfriend, he takes on his ailing dad's rounds, finding both solace and frustration in the work. It's a bit erratic, with a couple of stretches that just consist of Cazale handing out food and an ending that's slightly rushed, but there are enough offbeat laughs and telling episodes to make it worthwhile. It's also a bit darker than you might expect, or at least more fraught. (3)
Posted by Rick Burin at 14:47