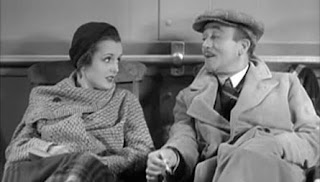 Scratch that, this is the best movie I’ve seen so far this year:
Smart Woman (Gregory La Cava, 1931) – Mary Astor is terrific in this mature, intelligent pre-Code comedy-drama, playing a trusting wife who returns from an overseas visit to her ailing mother to find husband Robert Ames has fallen for a platinum blonde gold-digger (Noel Francis). She falls apart, but then comes out fighting, inviting Francis and her pushy mother up for the weekend, and concocting an affair of her own with steamship friend John Halliday, a British millionaire. Astor became a star as John Barrymore’s principal love interest in Beau Brummel, with the actor famously remarking that she was the “most beautiful creature” he had ever seen. Though she’s probably best known today for one of her weaker performances – as a nervy femme fatale in The Maltese Falcon, which seems a bit ill-judged – she was a consistently interesting performer. Rangy too, shifting from flirty maneaters (The Palm Beach Story) to stoic matriarchs (Meet Me in St Louis, Little Women (1949)) and doing some of her best work as a good-hearted, alcoholic call girl in the unsatisfying noir, Act of Violence. In Smart Woman she is better than I have ever seen her: as adept at handling the tongue-in-cheek banter as the simmering undercurrent of abject misery. The film doesn’t take Ames’ adultery lightly. Though Astor’s wronged wife swans around in a posh frock, saying she’s “a modern woman” to whom divorce is but a trifle, we see how she’s feeling during her secret, periodic breakdowns. Astor delivers the dialogue effortlessly, but it’s when it’s down to her to articulate feelings with a single glance or a nuanced expression that she excels, putting her silent screen experience into practice. Halliday is also spectacular as Astor’s smitten acquaintance, who comes to her aid despite his feelings, while Edward Everett Horton is characteristically excellent, umming and aahing a little less than usual. Francis is also well-cast and amusing, though Ames is something of a weak link in a nondescript performance. If the film’s stage origins are sometimes clear, La Cava’s mobile camera (used to great effect in classics like My Man Godfrey and Stage Door) does help to open the action up. As Mamoulian would in the following year’s Love Me Tonight, the director seems to be doing whatever he wants with the heavy sound-enabled camera and hoping that the quality of the film distracts from the humming and juddering caused by moving the damn thing. The result is an exceptional little film, the incisive material elevated both by that strong direction and the remarkably fine performances – particularly from Astor. (4) 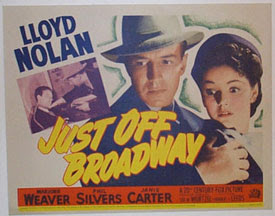 Just Off Broadway (Herbert I. Leeds, 1942) was the sixth of seven Michael Shayne mystery-comedies made at Fox during the early 1940s starring Lloyd Nolan. The first is the best, with detective Shayne babysitting a spoiled heiress (Marjorie Weaver) and getting embroiled in a murder investigation, but Sleepers West, The Man Who Wouldn’t Die and particularly Dressed to Kill are all entertaining, well-written films buoyed by Nolan’s engaging, amusing, irreverent central turn. This penultimate outing is less engaging, largely because of an unrealistic story in which Shayne does jury service and winds up having to solve a double murder. Movies aren’t usually scrupulously faithful to legal procedure, but the way Shayne is allowed to take over in the courtroom in the final reels is perhaps a step too far. The pacing is also less assured than usual, though Nolan is great fun to watch and it’s good to see him re-teamed with Weaver, who’s playing a spirited reporter. Phil Silvers, with an unfamiliar thatch of hair, is a freelance photographer who won’t leave Shayne alone. (2.5) 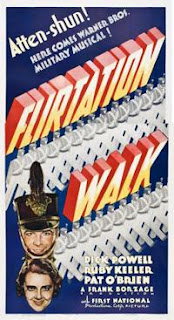 Flirtation Walk (Frank Borzage, 1934) is an entertaining if disjointed salute to the West Point military academy that flits from romantic comedy to putting-on-a-show musical to sentimental drama. Dick Powell is a happy-go-lucky private who joins officer training when he thinks he's lost the girl he loves (Ruby Keeler). Though the film doesn't really gel, there are some great sequences: Powell and Keeler falling in love in hazily-romantic Hawaii, his speedy rendition of Mr & Mrs Is the Name and the penultimate scene: an emotional encounter between the forlorn Powell and gruff, good-hearted sergeant Scrapper (Pat O'Brien). The rest is comprised of broad comedy, petty squabbling and lots of enthusiastically-choreographed marching. It's a wonder any young girls continued to idolise Powell after seeing him manufacture a quadruple-chin here - then maintain it through an entire montage. Incidentally, the curious, antiquated title comes from a romantic pathway in the film, which has a legend attached.(2.5) 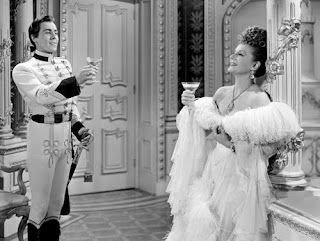 A Royal Scandal (Otto Preminger, 1945) was Lubitsch's final, uncompleted film, finished off by everyone's favourite teutonic tyrant, Otto Preminger. For an hour it's a revelation: clever, amusing, often anarchically funny; then it strays into fraught drama and falls down a bit. Legendary bon vivant Tallulah Bankhead is commanding as Catherine the Great, who takes a fancy to a young soldier and promotes him way above his station, provoking the ire of his fiancee, lady-in-waiting Anne Baxter. Meanwhile, traitors circle, led by conniving Sig Ruman, looking uncannily like Claude Rains' King John. The supporting cast is loaded with superb character players: Charles Coburn as the practical, thieving chancellor, Mischa Auer in a hysterical recurring bit as an obsessive guard ("I just want to watch the east gate!") and Grady Sutton, playing the most Tennessee-sounding Russian bumpkin you'll ever hear. Vincent Price overdoes it a little as the supercilious French ambassador, but he's still fun to watch. For Lubitsch fans, this is a treat, combining his knowing treatment of sexual politics with a lighter variation of the deft satire he employed in Ninotchka and To Be or Not to Be. Even if the troubled production means the movie's momentum isn't maintained to the finish, I laughed out loud a dozen times in the first hour - and you can't really argue with that. (3.5)
Posted by Rick Burin at 22:04