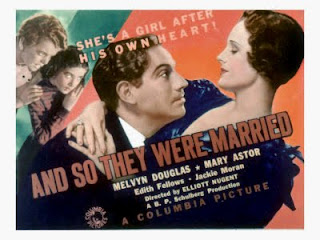 And So They Were Married (Elliot Nugent, 1936) is a fun romantic comedy set over the Christmas season, with divorcee Mary Astor falling for widower Melvyn Douglas at a snowbound hotel as their boisterous children (Edith Fellows and Jackie Moran) plot to keep them apart. Though the production values are a bit low - and there's little utilisation of the festive setting - the kids are great value and Douglas shows the deft comic touch and ability to subtly evoke emotion that saw him spread his screen success to stage and the small screen. There's a lovely moment where he shrugs off his broken heart by ruffling his son's hair and murmuring: "I just need a little time, son." The film is more realistic, and therefore less escapist, than Columbia's usual sparkly fare, as it effectively paraphrases the difficulties of single parenthood. There's a slight over-reliance on visual humour and the title is shamefully generic, but you can't fail to enjoy a film that features both Donald Meek as an exasperated hotel manager and Douglas Scott (young Hindley in Wyler's Wuthering Heights), scene-stealing as a breakaway mummy's boy. Once you've explored the more obvious genre gems from Columbia (It Happened One Night, A Night to Remember, Together Again), it's worth giving this one a go. (3)

If you enjoy And So They Were Married, try Listen Darling (Edwin L Marin, 1938), a charming comedy in which kids once more have a hand in determining Mary Astor's lovelife. There it's three of the '30s best child performers pitching in - Freddie Bartholomew, Judy Garland and the doomed Scotty Beckett - with Walter Pidgeon as Astor's potential beau. Great stuff, featuring two of Garland's finest screen numbers: Zing! Went the Strings of My Heart and Ten Pins in the Sky. (3.5)
Posted by Rick Burin at 13:58